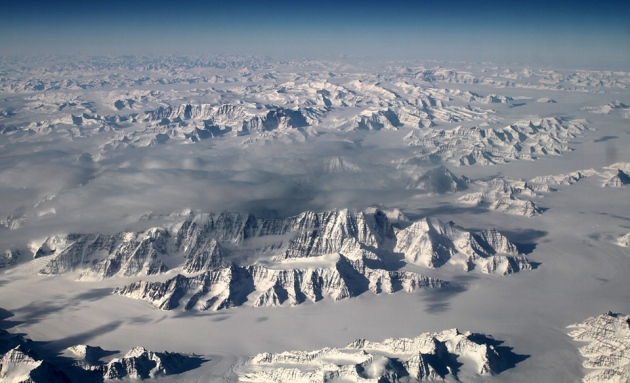 The Greenland ice sheet is under surveillance by the Landsat 8 satellite.

Scientists have a new tool to systematically track the evolution of glaciers and ice sheets as the climate warms. The US$1-million system, which is funded by NASA and uses data from the Landsat 8 satellite, was unveiled this week at the American Geophysical Union meeting in San Francisco, California.

The Global Land Ice Velocity Extraction project (GoLIVE) is the first to provide scientists with regular, semi-automated measurements of ice movement across the entire world. Landsat covers the planet every 16 days, and by comparing landmarks and subtle features in ice from one image to another, researchers are able to trace the flow of ice over weeks, seasons and years.

“We now are watching all of the outlet glaciers on Earth change in real time,” says Mark Fahnestock, a glaciologist at the University of Alaska Fairbanks who helped to develop GoLIVE. “Our eyes are open.”

Scientists have been using satellite imagery and radar to track the movement and evolution of glaciers from space for decades, but until now, doing so has required painstaking analysis. Advances in satellite technology, computer algorithms and processing power are now enabling them to expand their reach.

The goal is to understand how quickly glaciers and ice sheets will melt — and consequently how fast oceans will rise — as temperatures increase. Similar efforts to build a record of ice flow are underway for Greenland and Antarctica; these use data from multiple satellites, including visual imagery from Landsat 8 and the European Sentinel 1 satellites.

Eyes in the sky

But some scientists think that radar will ultimately prevail because, unlike visible-light satellite imagery, it can track ice through clouds and at night. This is particularly important in places such as Greenland and Antarctica, where the bulk of the world’s ice is shrouded in complete darkness for much of the winter, says Ian Joughin, a glaciologist at the University of Washington in Seattle who is using the Sentinel 1 radar data and other satellite observations to map Greenland’s ice flow.

“They are doing a nice job with the data, but it’s not so different from what we are doing already,” he says.

But GoLIVE is the first global project to provide scientists with a regular stream of processed data that can quickly be incorporated into existing research projects, says Ted Scambos, a glaciologist at the National Snow and Ice Data Center in Boulder, Colorado, which is hosting the GoLIVE data. “It’s near-real-time global coverage that is available to users within a few weeks,” he says.

With just 3.5 years of data collected since Landsat 8 launched, GoLIVE is already shedding new light on how glaciers behave, says Twila Moon, a glaciologist at the University of Bristol, UK, who is working on the project. Her initial analysis of glaciers across Greenland revealed that different areas showed varying seasonal movement patterns, probably associated with regional topography. Some glaciers surge early in the spring and slow down by late summer, whereas others build momentum more slowly, peaking by midsummer and then slowly declining.

“We’re getting to the point where we have enough data to see patterns,” says Moon. “It’s a whole new realm of potentially being able to predict glacier behaviour.”

Daniel McGrath, a glaciologist at Colorado State University in Fort Collins who was not involved in the project, is already using the data to study a rift in Antarctica’s Larsen C ice shelf. His team is using a detailed model to investigate how the rift propagates and affects the rest of the ice sheet. And rather than relying on ice-flow estimates that are several years old, he says, he and his colleagues can now incorporate current data and track changes over time.

“That’s not something we could do previously,” he says.