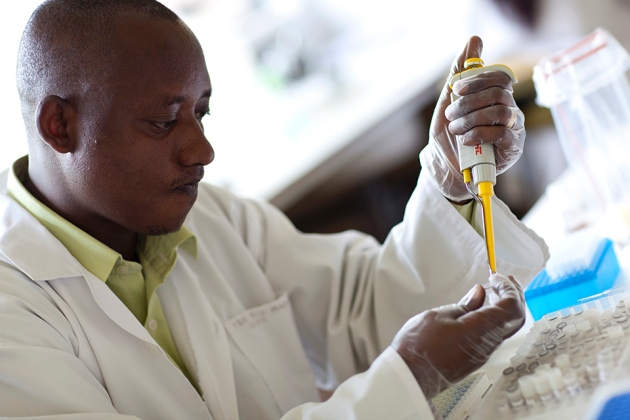 Rwanda has improved the quality of its home-grown science.

Rwanda has made major public-health strides since the country's genocide against the Tutsi people ended in June 1994, but declines in foreign aid now threaten that progress.

Donors such as the US President’s Emergency Plan for AIDS Relief and the Global Fund to Fight AIDS, Tuberculosis and Malaria have reduced assistance to Rwanda by 40% over the past three years, jeopardizing advances in a country seen as a development success story. The situation will be hotly discussed at the annual meeting of The World Academy of Sciences in Kigali on 14–17 November.

“If the decline in funding continues, there are a lot of things to lose rather than to gain,” says Sabin Nsanzimana, who manages initiatives on HIV and other blood-borne diseases at the Rwanda Biomedical Center in Kigali, which runs the country’s health programmes.

The declining foreign aid is part of two broader trends in development: redirecting money to countries that have the highest number of sick people, and urging developing countries to fund more of their own development work. The former has reduced aid to Rwanda, a small country that has slashed the incidence of diseases such as HIV. Like many other developing nations, Rwanda doesn’t have the resources to move money from priority areas such as education into health, says Nsanzimana, citing a study by Anna Vassall, an epidemiologist at the London School of Hygiene & Tropical Medicine1.

Vassall estimates that even if sub-Saharan African nations more than triple their spending on HIV in the next five years, most could only raise half the money they need to meet the goal set by the Joint United Nations Programme on HIV/AIDS of ending the epidemic's global threat by 2030.

Fredrick Kateera, director of research for the Rwanda office of the non-profit organization Partners in Health, says that funding cuts could imperil the research that is needed to fight diseases such as malaria in Rwanda and elsewhere. “Setting up surveillance systems costs just as much money as just giving out drugs and bed nets,” Kateera says.

Rwanda has long been seen as a prime example of how science can aid development. After the genocide in 1994, Rwanda's President Paul Kagame invested in building roads, high-speed Internet access and applying science to local problems. The country slashed maternal and infant deaths, new HIV infections, AIDS deaths and mother-to-child HIV transmission2.

Kagame has also used his authority to ensure that science conducted by local and foreign scientists promotes domestic development. In 2012, the country’s ministry of health published guidelines compelling all foreign research projects to strengthen Rwandan research capacity, such as training its scientists or building infrastructure. Rwandan researchers routinely appear as first and last authors on studies conducted in the country, in contrast to other African nations where native researchers often don’t benefit from foreign collaborations.

“You can’t just be a global health researcher who drops in, gets some data, publishes it with your name as first author and never comes back,” says epidemiologist Edward Mills of the Institute for Health Metrics and Evaluation in Seattle, Washington, and an adjunct professor at the University of Rwanda in Kigali.

Staff at clinics and ministries who fail in their roles to meet stringent health targets can also be reassigned or sacked. In July, for instance, Kagame removed Agnès Binagwaho from her post as minister of health. The highly regarded paediatrician earned the US$100,000 Roux Prize for using data to improve public health in April 2015, but was let go after malaria cases in the country quadrupled to 2 million between 2012 and 2015.

Human-rights groups have chafed at Kagame’s authoritarian tendencies, but he has kept corruption low in Rwanda compared with other sub-Saharan African nations. This made the country a favourite of donors for much of the 2000s. But that shifted after 2013, when organizations such as the US Institute of Medicine questioned donors’ generosity towards Rwanda compared to nations with much higher HIV burdens — such as Swaziland.

In response, donors recalibrated; in 2014, for instance, the Global Fund to Fight AIDS, Tuberculosis and Malaria began using a new formula that allocated funding in part according to a country’s burden of disease. In June, the fund said that it had reworked its formula again in response to protests from countries such as Rwanda that it punished them for their success. Still, Rwandan researchers are feeling the pinch.

“The willingness to do research is there, but many institutions are lacking funding,” says physician and molecular biologist Etienne Karita, who is country director for Projet San Francisco, an HIV-prevention programme in Kigali.

Despite the funding constraints and bureaucratic restrictions, Rwandan researchers who train abroad often return to their home nation, attracted by the prospect of playing their part in rebuilding.

Kateera, for instance, earned his medical degree in Uganda, where universities have partnerships with prestigious institutions in Europe, the United States and Asia. Tiny Rwanda, with one-third the population and one-ninth the area of Uganda, doesn’t have that same wealth of opportunities. But Kateera feels that he can make more of a difference in Rwanda: “You can make a big impact and measure it much more easily here compared to in a larger country,” he says. He and other researchers hope that donors will hear their case, and make sure that this impact continues.