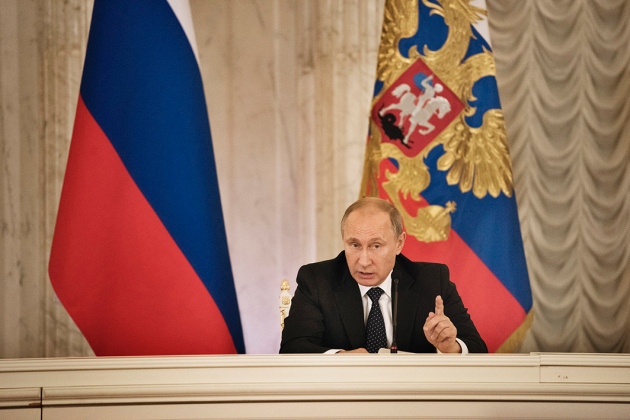 A biology institute at Russia’s largest and most prestigious university has instructed its scientists to get all research manuscripts approved by the security service before submitting them to conferences or journals.

The instructions, which come in response to an amended law on state secrets, appear in minutes from a meeting held on 5 October at the A. N. Belozersky Institute of Physico-Chemical Biology at Lomonosov Moscow State University (MSU).

The Russian government says that the amendment is not designed to restrict the publication of basic, non-military research. But scientists say that they believe institutes across the country are issuing similar orders.

“This is a return to Soviet times when in order to send a paper to an international journal, we had to get a permission specifying that the result is not new and important and hence may be published abroad,” says Mikhail Gelfand, a bioinformatician at MSU.

In 1993, the government passed a law obliging scientists in Russia to get permission from the Federal Security Service (FSB) before publishing results that might have military or industrial significance. This mainly covered work that related to building weapons, including nuclear, biological and chemical ones.

Russia's crackdowns are jeopardizing its science

However, in May, President Vladimir Putin used a decree to expand the scope of the law to include any science that can be used to develop vaguely defined “new products”. The amendment was part of a broader crackdown that included declaring the deaths and wounding of soldiers during peacetime a secret; this was prompted by accusations that Russian soldiers are involved in conflict in Ukraine.

Since then, rumours have emerged that Russian universities and institutes are demanding that manuscripts be approved before submission to comply with the amendment. The minutes from the Belozersky Institute meeting confirm this. “Be reminded that current legislation obliges scientists to get approval prior to publication of any article and conference talk or poster,” they say. They note that the rules apply to any publication or conference, foreign or national, and to all staff “without exception”.

Scientists will need to seek permission from the university’s First Department — a branch of the FSB that exists at all Russian universities and research institutes, says Viacheslav Shuper, a geographer at the Russian Academy of Sciences in Moscow and MSU. He says that MSU geographers have been given similar instructions.

The minutes tell scientists to seek permission “despite the obvious absurdity of the whole situation”. Vladimir Skulachev, director of the Belozersky Institute, did not respond to Nature’s queries as to how the changes might affect research in his department.

“Anything new and potentially useful can now be interpreted to be a state secret.”

Shuper and other academics say researchers across Russia have complained that their institutes are also asking for manuscript approval. “Many scientists in Russia don’t dare to speak openly,” says Shuper. “But I know that many are very unhappy about the degradation of their academic freedom.”

Letting bureaucrats decide whether any piece of science is a state secret is not just nerve-wracking, but also burdensome, he says. For example, at some institutes, scientists who have written papers in English for foreign publication are obliged to translate them into Russian for the sake of the security service.

The changes are also bad for science, says Fyodor Kondrashov, a Russian biologist at the Centre for Genomic Regulation in Barcelona, Spain. “The problem is that it appears that all scientific output is being treated as potentially classified,” he says. “This creates an unhealthy research climate with some scientists preferring not to share information — not to give a talk at a conference abroad, for example. I fear that the authorities will choose to apply this law selectively against their critics.”

Sergey Salikhov, director of the Russian science ministry’s science and technology department, told Nature that the government does not intend the amendment to restrict the publication of basic research. He says that it is not ordering universities or security services to proactively enforce the law over civilian research.

“For Russia’s scientific community, a crackdown on academic freedom will be devastating."

But the amendment leaves interpretation to the security services and science administrators, who tend to be over-zealous, says Gelfand. “Basically, anything new and potentially useful can now be interpreted to be a state secret,” says Konstantin Severinov, a molecular biologist with the Skolkovo Institute of Science and Technology, who graduated from MSU.

The demand for approval runs counter to government efforts to strengthen and internationalize Russian science, says Severinov. The government aims to see 5 of the country’s universities enter the top 100 in the world rankings by 2020, and is keen to attract leading foreign scientists to Russia.

Gelfand says that he will not comply with the rules imposed by his institute, and he encourages others to follow suit. “A sad sign of overall deterioration here is that many are sheepishly following any absurdity instilled by the bureaucrats,” he says. “I am going to ignore it and hope that a sufficient number of colleagues would do the same.”