A meteor that exploded over Russia this morning was the largest recorded object to strike the Earth in more than a century, scientists say. Infrasound data collected by a network designed to watch for nuclear weapons testing suggests that today's blast released hundreds of kilotonnes of energy. That would make it far more powerful than the nuclear weapon tested by North Korea just days ago and the largest rock crashing onto the planet since a meteor broke up over Siberia's Tunguska river in 1908.

"It was a very, very powerful event," says Margaret Campbell-Brown, an astronomer at the University of Western Ontario in London, Canada, who has studied data from two infrasound stations near the impact site. Her calculations show that the meteoroid was approximately 15 metres across when it entered the atmosphere, and put its mass at around 7,000 metric tonnes. "That would make it the biggest object recorded to hit the Earth since Tunguska," she says.

The meteor appeared at around 9.25 a.m. local time over the region of Chelyabinsk, near the southern Ural Mountains. The fireball blinded drivers and a subsequent explosion blew out windows and damaged hundreds of buildings. So far, more than 700 people are reported to have been injured, mainly from broken glass, according to a statement from the Russian Emergency Ministry. 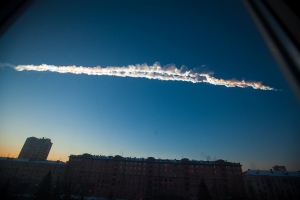 The meteor contrail seen over Chelyabinsk, Russia, on 15 February. The object's explosion in the atmosphere is reported to have injured more than 700 people.

Despite its massive size, the object went undetected until it hit the atmosphere. "I'm not aware of anyone who saw this coming," says Heiner Klinkrad, head of the European Space Agency's space debris office at the European Space Operations Centre in Darmstadt, Germany. Although a network of telescopes watches for asteroids that might strike Earth, it is geared towards spotting larger objects — between 100 metres and a kilometre in size.

"Objects like that are nearly impossible to see until a day or two before impact," says Timothy Spahr, director of the Minor Planet Center in Cambridge, Massachusetts, which tracks asteroids and small bodies. So far as he knows, he says, his centre also failed to spot the approaching rock.

The meteoroid itself was probably made of rock, but may have also contained nickel and iron. Campbell-Brown says that it was likely to have come from the asteroid belt, a region containing hundreds of thousands of rocky bodies and located between Mars and Jupiter. The European Space Agency does not think that the meteor is related to a much larger asteroid known as 2012 DA14, which will be passing within about 20,000 kilometres of Earth later today. Both the timing of the meteor's appearance and its location indicate that it came from a different direction, Klinkrad says. Campbell-Brown agrees: "We happened to have close approaches to two of them, and one of them got us," she says.

Although there are reports of fragments of the meteor, or meteorites, striking the ground, Klinkrad says that he believes the vast majority of damage in the region was caused by shockwaves of the explosion, as the rock broke up in the upper atmosphere. Campbell-Brown says that the infrasound data shows a very shallow angle of approach — a feature that funnelled much of the energy from the blast to the city below. Still, she adds, "It's lucky that there wasn't more damage."

The infrasound stations belonged to the Comprehensive Test Ban Treaty Organization, an international body that is designed to watch the Earth for nuclear-weapons tests. It is unlikely to be the only source of data on the strike. Both the United States and Russia have satellites in geosynchronous orbit that watch for the heat signatures of missile launches and warhead re-entries. The US military has released data on meteor strikes in the past, but it is unclear whether they will do so for today's event.

Klinkrad says it would have been hard to give warning of the blast. In addition to being relatively small in size, the rocky meteoroid was probably dark in colour, making it even harder to spot against the backdrop of space.  "We just have to live with it," he says.

An earlier version of this article estimated the mass of the meteor at around 40 tonnes.