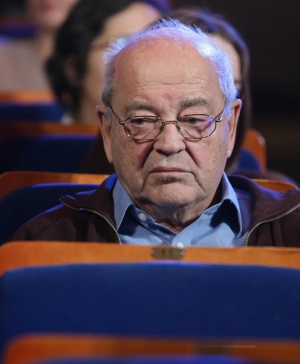 Dmitry Zimin is deeply upset by the prospect of his foundation being labelled a foreign agent.

Since this article was published on 20 May, Russia’s Ministry of Justice has officially labelled the Dynasty Foundation, modern Russia’s first private science funding organization, a ‘foreign agent’.  In a brief statement released on 25 May, the ministry said that the foundation would be added to the list of foreign agents after “planned documentary checks”.

The foundation's funder, the oligarch and philanthropist Dmitry Zimin, told the Interfax news agency that he plans to stop funding Dynasty. “Certainly, I will not spend my own money acting under the trademark of some unknown foreign state," he said.

Dmitry Zimin is not your typical Russian oligarch. Whereas some choose to pump their fortunes into yachts and football clubs, the 82-year-old former president of VimpelCom, one of Russia’s largest telecommunication companies, turned to philanthropy — creating modern Russia’s first private science-funding organization.

The Dynasty Foundation has earned Zimin prestigious government awards, but has now fallen out of favour with the Kremlin, putting its future at risk.

After a lengthy audit of the 13-year-old foundation’s finances and funding activities, the Russian Ministry of Justice indicated in a preliminary report last month that Dynasty qualifies as a ‘foreign agent’, although it offered no justification for why. The designation relates to a controversial law passed by President Vladimir Putin in 2012 that requires non-governmental organizations that receive foreign funding and are deemed to be involved in vaguely defined “political activities” to register with the ministry as foreign agents.

The term is a loaded one to Russian ears, carrying Soviet-era connotations of espionage and treachery. Dynasty’s executive director, Anna Piotrovskaya, says that its possible association with the foundation has deeply upset Zimin. Dynasty officials and Russian scientists fear that finalizing the label would seriously damage the reputation of the foundation and hamper its activities, and might even lead Zimin to shut it down.

So far, the ministry has labelled more than 50 human-rights groups, news agencies and environmental watchdogs as foreign agents, and issued warnings or brought charges against dozens of other groups for failing to register. Dynasty would be the first natural-sciences organization to be targeted, following at least two social-science research centres.

“The foreign-agent law is an outrageous attack on free speech,” says Tanya Lokshina, who is the Russia programme director at Human Rights Watch in Moscow. “Sadly, hostility to anything foreign is as high in Russia as it has been since the height of the cold war.”

The Dynasty Foundation is a force in Russian science. This year, it plans to spend some 435 million roubles (US$8.9 million) on fellowships, summer schools and educational projects. Fellowship grants are available for molecular biologists, theoretical physicists and mathematicians at various stages in their careers: in 2014, Dynasty helped 288 physicists, 14 mathematicians, 21 biologists and 509 science teachers. Support from the foundation — up to 600,000 roubles (US$12,000) per year for a postdoctoral researcher — has allowed hundreds of young Russian scientists to supplement their poor salaries, buy lab equipment and travel to meetings abroad.

Many Russian scientists are shocked and outraged by the suggestion that Dynasty be designated a foreign agent. They hold the foundation in high regard for its cosmopolitan air — it requires all grant proposals to be submitted in English, for example — and its strictly merit-based funding criteria. These qualities help Russian science to flourish, something that the government has professed to be committed to, says Konstantin Severinov, a molecular biologist at the Skolkovo Institute of Science and Technology near Moscow, and a professor at Rutgers University in Piscataway, New Jersey. “For scientists who grew up in Russia, English-language proposals and fair peer review are very new experiences,” he says. “These kinds of things are really indispensable for bringing our scientists closer to their Western counterparts.” They are a far cry from counting as the activities of a spy agency, he says.

Dynasty also seeks to foster free speech and scientific enlightenment. It supports the translation and publication of popular science books, such as physicist Stephen Hawking’s The Universe in a Nutshell (Bantam, 2001). But although Dynasty has been careful to remain apolitical, says Lokshina, it might have been scuppered by its support of a Moscow museum and exhibition hall named after the famous Soviet dissident Andrei Sakharov.

Some, however, place the blame on an increasingly nationalistic and inward-facing government. Tightening the screws on science and education is consistent with the ongoing crackdown on liberal groups and ideas, says Fyodor Kondrashov, a group leader at the Centre for Genomic Regulation in Barcelona, Spain, who organizes Dynasty-funded summer schools in molecular and theoretical biology. “Russian society is undergoing hard-line changes,” he says. “Where will it end?”

The popular summer schools are held every August in the academic city of Pushchino south of Moscow, and bring together talented high-school students, postdoctoral researchers and senior scientists from Russia and abroad. Experiments done there have produced several papers published in international journals, with students as co-authors. If the foundation is labelled a foreign agent, parents who back Putin, as most Russians do, might not want to send their children to the schools, and scientists who do the lecturing might also grow cautious. “Supporters of Putin and anyone fearful of trouble will stay far away,” says Kondrashov.

As Nature went to press, the justice ministry had not announced its decision on the issue, which it was expected to do on 13 May. Members of Dynasty’s board have scheduled a meeting on 8 June to discuss the ramifications of any ruling. The case is an example of problems that have been plaguing Russian science for years, says Valery Yakubovich, a sociologist at ESSEC Business School in Cergy Pontoise, France, including questionable accusations of espionage and political subversion against individual researchers. “Whatever happens,” he says, “this is all very troubling.”

The original version of this article's sub-heading, on 20 May, stated: "Russia’s Ministry of Justice threatens to label the Dynasty Foundation a ‘foreign agent’."