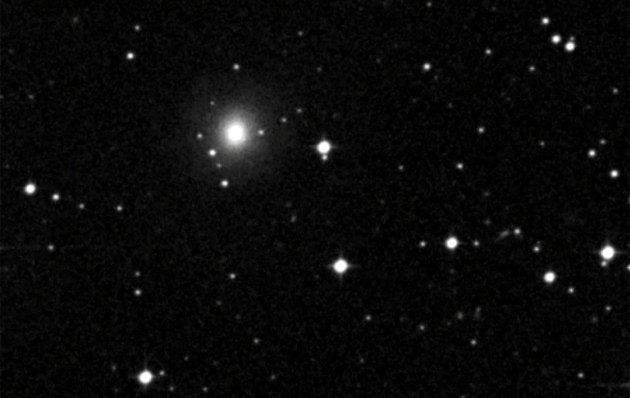 The galaxy NGC 4993 (fuzzy bright spot) in the constellation Hydra, where detectors are rumoured to have spotted gravitational waves from a neutron star merger.

Astrophysicists may have detected gravitational waves last week from the collision of two neutron stars in a distant galaxy — and telescopes trained on the same region might also have spotted the event.

Rumours to that effect are spreading fast online, much to researchers’ excitement. Such a detection could mark a new era of astronomy: one in which phenomena are both seen by conventional telescopes and ‘heard’ as vibrations in the fabric of space-time. “It would be an incredible advance in our understanding,” says Stuart Shapiro, an astrophysicist at the University of Illinois at Urbana–Champaign.

Scientists who work with gravitational-wave detectors won’t comment on the gossip because the data is still under analysis. Public records show that telescopes around the world have been looking at the same galaxy since last week, but astronomers caution that they could have been picking up signals from an unrelated source.

As researchers hunt for signals in their data, Nature explains what is known so far, and the possible implications of any discovery.

The Laser Interferometer Gravitational-Wave Observatory (LIGO) in Louisiana and Washington state has three times detected gravitational waves — ripples in the fabric of space-time — emerging from colliding black holes. But scientists have been hoping to detect ripples from another cosmic cataclysm, such as the merger of neutron stars, remnants of large stars that exploded but were not massive enough to collapse into a black hole. Such an event should also emit radiation across the electromagnetic spectrum — from radio waves to γ-rays — which telescopes might be able to pick up.

On 18 August, astronomer J. Craig Wheeler of the University of Texas at Austin began the public rumour mill when he tweeted, “New LIGO. Source with optical counterpart. Blow your sox off!” An hour later, astronomer Peter Yoachim of the University of Washington in Seattle tweeted that LIGO had seen a signal with an optical counterpart (that is, something that telescopes could see) from a galaxy called NGC 4993, which is around 40 million parsecs (130 million light years) away in the southern constellation Hydra. “Merging neutron-neutron star is the initial call”, he followed up. Some astronomers who do not want to be identified say that rumours had been privately circulating before Wheeler’s and Yoachim’s tweets.

If gravitational-wave researchers saw a signal, it is plausible that they could know very quickly whether it emerged from colliding black holes or neutron stars, because each type of event has its own signature, even though data must be studied carefully to be more precise about an event’s origin.

It’s also possible that LIGO’s sister observatory Virgo in Pisa, Italy, which has been helping LIGO to hunt for gravitational waves since August, after taking a break for an upgrade, might have spotted the event. That would give researchers more confidence about its source. (Virgo has an average sensitivity for neutron-star mergers of only 25 million to 27 million parsecs, but in some regions of the sky, it can see farther, up to 60 million parsecs away, says physicist Giovanni Losurdo, who led the detector's upgrade work.)

Both Wheeler and Yoachim declined to comment, and Wheeler later apologized on Twitter. “Right or wrong, I should not have sent that tweet. LIGO deserves to announce when they deem appropriate. Mea culpa,” he wrote.

What about the telescope observations?

Public records show that NASA’s Fermi Gamma-ray Space Telescope has spotted γ-rays emerging from the same region of sky as the potential gravitational-wave source. A senior Fermi member declined to comment on the observation, but it would be consistent with expectations that neutron-star collisions may be behind the enigmatic phenomena known as short γ-ray bursts (GRBs), which typically last a couple of seconds and are usually followed by an afterglow of visible light and sometimes, radio waves and x-rays, lasting up to a few days.

But although the Fermi telescope has seen a GRB, it may not be able to pinpoint its origin with high precision, astronomers caution. 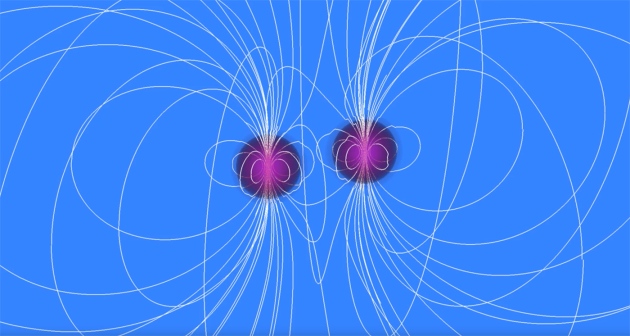 Simulations by M. Ruiz, R. N. Lang, V. Paschalidis and S. L.Shapiro at the University of Illinois at Urbana-Champaign, with visualization assistance from the Illinois Relativity REU team

A simulation of the merger of a binary neutron star: magnetic field lines are in white.

Other telescopes were also turned to look at NGC 4993 after an alert about a potential gravitational wave sighting. On 22 August, a Twitter feed called Space Telescope Live, which provides live updates of what the Hubble Space Telescope is looking at, suggested that a team of astronomers was looking at a binary neutron-star merger using the probe’s on-board spectrograph, which is what astronomers would normally use to look at the afterglow of a short GRB.  The Hubble tweet has since been deleted. Public records also confirm that multiple teams have used the Hubble Space Telescope over the last week to examine NGC 4993, and state as their reason that they are trying to follow up on a candidate observation of gravitational waves.

On 23 August, a commenter on the blog of astrophysicist Peter Coles, of Cardiff University in the UK, noted that NASA’s Chandra X-ray observatory had jumped into the action, too. The Chandra website contains a public record of an observation made on 19 August. The telescope pointed at celestial coordinates in the galaxy NGC 4993 and observed an event called SGRB170817A — indicating ‘short GRB of 2017-August-17’. The most revealing part of the report is the “trigger criteria” section, which explains the reason for over-riding any previously scheduled observation to turn the telescope in that direction. It says: “Gravitational wave source detected by aLIGO, VIRGO, or both.”

Publicly available records from other major astronomy facilities — including the European Southern Observatory’s Very Large Telescope and the world’s premiere radio observatory, the Atacama Large Millimeter/submillimeter Array (ALMA), both in Chile — show that those also targeted NGC 4993 on 18 and 19 August.

What could we learn from a neutron-star merger?

Gravitational-wave signals from black-hole mergers are brief, typically lasting a second or less. But a neutron-star merger could yield a signal that lasts up to a minute: neutron stars are less massive than black holes and emit less-powerful gravitational waves, so it takes longer for their orbits to decay and for the stars to spiral into each other. Longer events enable much more precise tests of Albert Einstein’s general theory of relativity, which predicts gravitational waves — perhaps giving more clues to the origins of neutron stars.

The short GRB that telescopes might have observed would be significant, too — not least because if it is associated with gravitational waves, it would validate decades of astrophysical theorizing that GRBs are associated with neutron-star collisions. “Only gravitational waves could give us the smoking gun,” says Eleonora Troja, an astrophysicist at NASA’s Goddard Space Flight Center in Greenbelt, Maryland.

Still, a short GRB would be an important discovery on its own. Most such events are seen in the distant Universe, billions of parsecs away. NGC 4993, at 40 million parsecs away, would probably be the closest short GRB ever detected, says astrophysicist Derek Fox of Pennsylvania State University in University Park.

Details of the gravitational waves at the time of the collision and in the following instances could also reveal information about the structure of neutron stars — which is largely unknown — and whether their merger resulted again in a neutron star or in the formation of a new black hole.

When will we know?

On 25 August, LIGO and Virgo will end their current data-collecting run. After that, researchers will post only a “top-level update”, meaning a brief note indicating whether the observatories have picked up potential ‘candidate events’ that need further analysis, says David Shoemaker, a physicist at the Massachusetts Institute of Technology who is LIGO’s spokesperson.

"It will take time to do justice to the data, and ensure that we publish things in which we have very high confidence,” he says.

Update 25 August: The LIGO–Virgo collaboration posted its top-level update, saying: “Some promising gravitational-wave candidates have been identified in data from both LIGO and Virgo during our preliminary analysis, and we have shared what we currently know with astronomical observing partners. We are working hard to assure that the candidates are valid gravitational-wave events, and it will require time to establish the level of confidence needed to bring any results to the scientific community and the greater public. We will let you know as soon we have information ready to share.”

This story has been updated to mention the official 25 August update from the LIGO–Virgo collaboration, and to note that the Fermi observation of a GRB is in the public record.

This story has been updated to include details of public Hubble Space Telescope records that confirm the instrument is being used to follow up a potential gravitational-wave sighting.