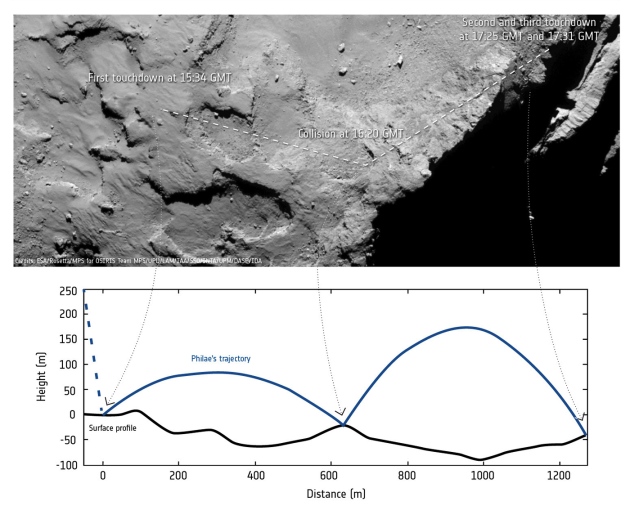 Rosetta's Philae lander bounced off the comet before settling in the shadow of a crater, magnetic field measurements show.

Scientists with the European Space Agency’s Rosetta mission have found that the comet on which its Philae probe landed last November does not have a magnetic field.

Finding magnetism on comet 67P/Churyumov-Gerasimenko could have supported the theory that magnetic attractions helped small bodies to assemble in the early Solar System, creating a signature that is still measurable on the comet today. But data from the Rosetta orbiter in space, and from the Philae lander on the comet's surface, seem to rule that out. The findings were described on 14 April at a meeting of the European Geosciences Union in Vienna and are reported in the journal Science1.

“It’s a massively important finding and a key thing we wanted to measure,” says Rosetta project scientist Matthew Taylor. “That 67P/Churyumov-Gerasimenko does not have a magnetic field could help us solve the puzzle of how planetary building blocks evolved from the proto-planetary disk. It appears we will have to switch off the effect of magnetism in our simulations [of the evolution of small celestial bodies].”

The lander bounced twice high off the surface of the comet and then rolled before settling in what is thought to be the edge of a shady crater. That meant magnetic-field measurements could be taken at different locations on and just above the comet, adding statistical signifiance to the report's conclusion. “Philae’s multiple touchdowns were a bit of a mishap,” says Hans-Ulrich Auster, a geophysicist at the Technical University of Braunschweig, Germany, and a co-author of the paper. “But it was a real benefit for our purposes that the lander bounced from spot to spot.”

Only a minority of researchers thought that the Rosetta team might find a magnetic field, says Auster. The discovery does not rule out the possibility that magnetism helps to pull together small particles in the earliest growth phase of comets or planets. But they make it implausible that magnetism furthers the growth of bodies once they have reached a certain size, he says. The resolution of Rosetta’s magnetic-field measurements is only about one metre. At that scale, at least, magnetic forces seem to have had little, if any, role in the evolution of the comet.

The finding shows how data collected from space and at the comet's surface can be combined effectively, says Taylor. Magnetic measurements may help the Rosetta team to locate Philae, which went into hibernation after just 64 hours on the comet, but which may wake up again as the comet gets closer to the Sun.

Philae's computer could reboot by the end of next month if temperatures rise sufficiently in the next few weeks to generate enough power, says Stephan Ulamec, Philae project manager at the German Aerospace Center in Cologne. Communication with the orbiter could then be established by the end of June, and Philae’s batteries could start to recharge in July.

“Getting Philae back to life would be the greatest gift,” Taylor says. “If it wakes up, there will be more of this fantastic kind of dual science.”