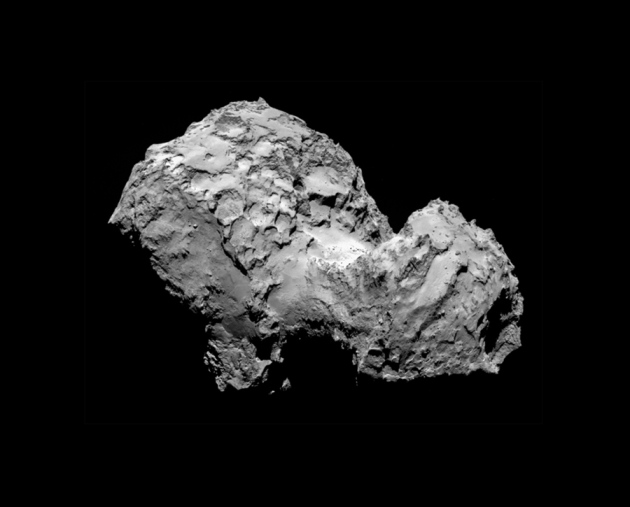 Comet 67P/Churyumov–Gerasimenko, as seen by Rosetta from a distance of 285 kilometres.

No one can deny that it was an epic trip. The European Space Agency's comet-chasing Rosetta spacecraft has arrived at its quarry, after launching more than a decade ago and travelling 6.4 billion kilometres through the Solar System.

That makes it the first spacecraft to rendezvous with a comet, and takes the mission a step closer to its next, more ambitious goal of making the first ever soft landing on a comet. Speaking from mission control in Darmstadt, Germany, Matt Taylor, Rosetta project scientist for the European Space Agency (ESA), called the space mission “the sexiest there’s ever been”.

Rosetta is now within 100 kilometres of its target, comet 67P/Churyumov–Gerasimenko (or 67P for short), which in July was discovered to be shaped like a rubber duck. After a six-minute thruster burn, at 11:29 a.m. local time on 6 August, ESA scientists confirmed that Rosetta had moved into the same orbit around the Sun as the comet.

Rosetta is now moving at a walking pace relative to the motion of 67P — though both are hurtling through space at 15 kilometres per second.

Unlike NASA’s Deep Impact and Stardust craft, and ESA’s Giotto mission, which flew by their target comets at high speed, Rosetta will now stay with the comet, taking a ring-side seat as 67P approaches the Sun, and eventually swings around it in August 2015.

In the coming weeks, Rosetta will hover slightly ahead of the 4-kilometre-wide comet and gradually spiral inwards, moving in arcs on its Sun side that form the edges of ever-smaller triangles (see video, below). Only once it is 30 kilometres away will the comet’s weak gravitational field be able to keep the probe in orbit; Rosetta may creep in as close as 10 kilometres.

Rosetta’s orbit around the comet

Speaking from the control room, Andrea Accom­azzo, Rosetta’s spacecraft-operations manager, compared the change in the environment for controlling the spacecraft to a shift from zooming along a highway to entering a “chaotic city”.

Scientists have now entered an intensive three-month phase that will involve learning to manoeuvre around the comet at close quarters. They will also take baseline measurements, before 67P becomes more active, spewing out gas and dust as it approaches the Sun.

From a distance, Rosetta’s instruments have already detected water in the ejected gas and measured the comet's temperature — finding it to be around 20 degrees warmer than they would expect from a purely icy body. “It fits instead with having a dusty, dark surface with ice underneath,” says Mark McCaughrean, senior scientific adviser at the ESA directorate of science and robotic exploration.

Comets fascinate scientists because they are primitive objects, little changed since the beginning of the Solar System, 4.6 billion years ago. Comets are also thought to have brought water and possibly the building blocks of life to Earth.

Another big task for Rosetta will be to look for a place to set down its lander, Philae, scheduled for November. Although Rosetta can study the comet from afar, including 'sniffing' ejected gas to figure out its composition, there are some tasks — such as studying the chirality or 'handedness' of any organic molecules it finds and glimpsing inside the comet with a radar — that only Philae can do. 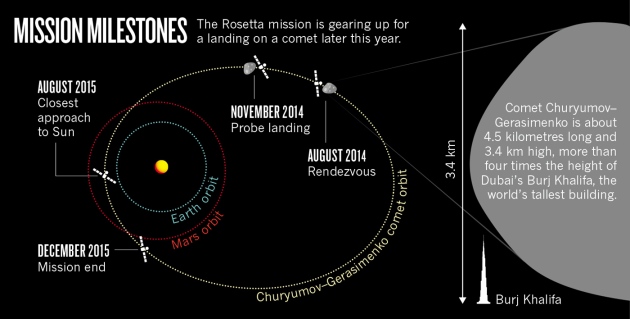 Recent pictures of the comet revealed it to have a ragged surface and be shaped a bit like a rubber duck or boot, nothing like “boring, flat billiard balls” previous missions have flown by, says McCaughrean. “We’ve won the jackpot in terms of crazy stakes. There’s a lot that can be learned just from looking at it, but the risk will be landing there,” he says.

Once Philae is released from Rosetta, its descent will be uncontrolled, meaning the most precise landing area engineers can determine is 500–800 metres long and 300 metres wide. From the pictures that have emerged so far, there seem to be few areas on the comet that are suitably devoid of cliffs or other obstacles such as house-sized boulders, says McCaughrean.

On its way to 67P, Rosetta has gone three times around Earth and once around Mars, making gravity slingshots that took it out into the depths of the Solar System before entering hibernation, from which it awoke in January this year.

Rosetta will stick with the comet until at least December 2015. McCaughrean compares its journey to a piece of music: “In January, it was the first movement in a symphony. We’ve had a quiet movement in the middle and today, this is the crescendo, the opening chords of the final movement. The mission starts this morning.”