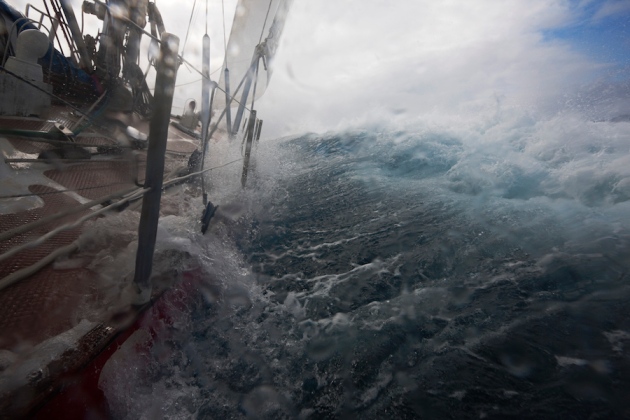 The notoriously rough waters of the Drake Passage have yielded new insight into ocean turbulence.

In the deep abysses of the ocean, small swirls of water can wield great power. Like the proverbial butterfly flap that stirs up a hurricane, this chaotic turbulence has long been thought to lift up water in the ocean’s interior to drive currents that stretch across the globe.

Now, some researchers are rethinking the role of this turbulence — turning it upside down. Using computer simulations fed with measurements from the field, they argue that small-scale turbulence drives circulation by pushing water in the ocean’s interior down, not up.

“We’ve shown that it’s the other way around,” says MIT oceanographer Raffaele Ferrari, who presented this new portrait of the abyss this week at the ocean-sciences meeting of the American Geophysical Union in New Orleans.

Ferrari hopes that the work will improve our understanding of how the deep oceans regulate climate. “It has big implications for how long carbon and heat absorbed from the atmosphere sit at the bottom of the ocean,” he says.

Water thought to take a millennium to circulate — sinking at the chilly poles and rising elsewhere to warm — instead could be doing so in centuries. Understanding that process is important for getting climate models right. “Climate models currently take a simplistic view which does not represent the role of ocean turbulence in deep circulation accurately,” says MIT oceanographer Ali Mashayek, who collaborated with Ferrari on the project.

The idea that mere turbulence can power the ocean owes much to oceanographer Walter Munk. Currents flowing through the deep ocean often start with cold, dense water sinking at high latitudes. But that water has to rise and warm to stimulate circulation. What caused this upwelling was a mystery.

In 1966, Munk suggested that turbulence drove this process, and calculated how much of it the oceans would need to power their great conveyor belts of water1. Over the years, his calculation went from controversial heresy to established wisdom. At first, expedition after expedition probing the upper reaches of the seas failed to find the intense mixing that he predicted, which was thought to be more-or-less uniform at different depths. 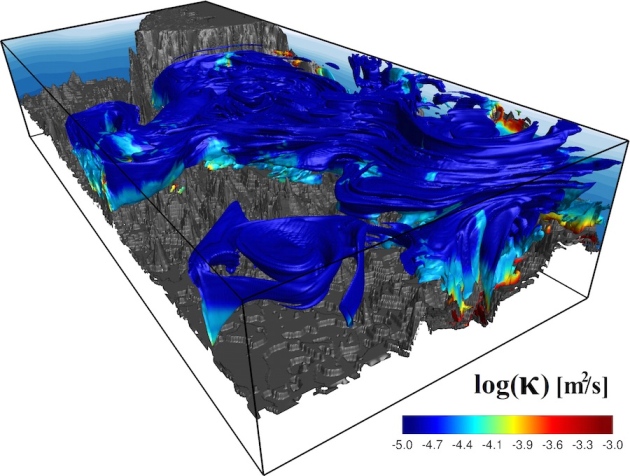 This figure shows the turbulent path taken by the Antarctic Circumpolar Current as it flows west to east through the Drake Passage.

It would be decades before technologies capable of pushing deeper began to find that mixing. “Even when turbulence is strong, it’s extremely difficult to measure,” says Matthew Alford, an oceanographer at the Scripps Institution of Oceanography in La Jolla, California. “It’s one of the hardest things to measure in the oceans.” Patches of violently churning water ultimately started turning up close to the sea floor, usually near underwater mountains and other rough terrain.

Investigations have since uncovered evidence that underwater waves create the abyssal chaos2. These waves form between layers of deep water with different densities, just as surface waves form between the surface water and air. Waves inside the ocean crash violently when they break; Alford measured some particularly spectacular examples, slow-moving waves the size of skyscrapers, while probing a 5,500-metre-deep passage near Samoa3.

Rolling in the deep

This rolling in the deep inverts the effect of turbulence, the MIT group argues. It causes upper, less-dense layers of water to mix into lower, denser layers — pulling massive flows down in the middle of oceans. Abyssal water does not rise everywhere in the ocean, as Munk had envisioned. Instead, it creeps across the bottom, coming up only at the edges of the oceans, at continental margins.

This proposal doesn’t entirely surprise Jim Ledwell, an oceanographer at the Woods Hole Oceanographic Institution in Massachusetts. In the 1990s, Ledwell was part of an expedition to the Mid-Atlantic Ridge, the longest mountain chain on Earth. Instruments that measure turbulence as well as tracer chemicals released into the water showed flows there descending into an area called the Brazil basin and rising at its edges4.

The MIT modelling incorporated data from that expedition, as well as from more-recent observations of a similar thing happening in the Drake Passage, between Cape Horn in Chile and the South Shetland Islands in Antarctica.

“They have taken the idea from the Brazil basin and extended it to the whole ocean,” says Ledwell. “When their paper on this comes out, it’s going to stimulate a lot of thinking.”

When asked what he thinks of the challenge to his idea, Munk, now 98 years old, replies: “I don’t know if I’m wrong yet.”

“But I’m not bothered if I’m wrong,” he says. “I think the important thing is that I got people working on an important problem that had previously been ignored.”