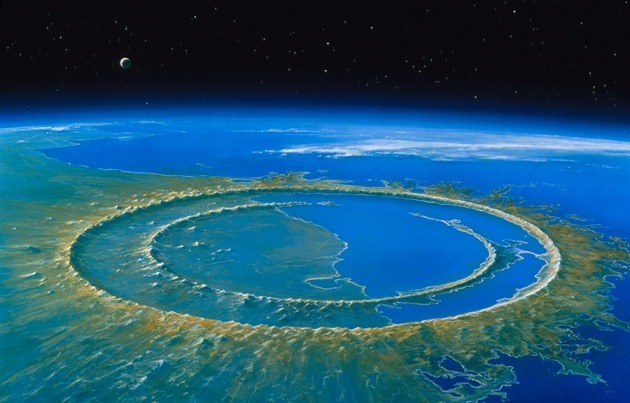 Drilling into ground zero of the asteroid impact that killed off the dinosaurs 66 million years ago has uncovered the origin of its mysterious ring of mountains.

The drill core penetrated a circle of mountains, known as a peak ring, in Mexico’s buried Chicxulub crater. Only the largest impacts are powerful enough to form peak rings. Understanding how these mountains formed at the 200-kilometre-wide Chicxulub could help to reveal how cosmic collisions shaped other bodies, such as the Moon and Venus.

The work also shows how, despite killing the dinosaurs, the impact may have created an environment where other life could thrive. The cosmic smash-up fractured rocks, opening up spaces and warm habitats for microbes to move in.

“We got a core better than we could reasonably have imagined,” says David Kring, a geologist at the Lunar and Planetary Institute in Houston, Texas. “It is absolutely extraordinary.” He and his colleagues describe the findings on 18 November in Science1.

After a decade of planning, the project penetrated 1,335 metres into the sea floor off the coast of Progreso, Mexico, in April and May. Drillers hit the first peak-ring rocks at a depth of 618 metres, and a pinkish granite at 748 metres.

Geologists know that the granite must have come from relatively deep in the crust — perhaps 8–10 kilometres down — because it contains big crystals. The size of these crystals suggests that they formed by the slow cooling of deep, molten rock; in contrast, rapid cooling at shallow depth tends to form small crystals. Finding the granite relatively high in the drill core means that something must have lifted it up and then thrown down it on top of other rocks. 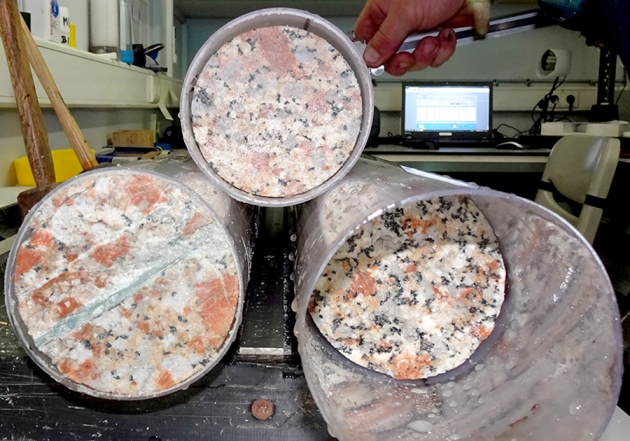 That rules out one idea of how craters form, in which the pulverized rock stays mostly in place like hot soup in a bowl. Instead, the core confirms the ‘dynamic collapse’ model of cosmic impacts, in which the asteroid punches a deep hole in the crust, causing the rock to flow like a liquid and spurt skyward. That rock then falls back to Earth, splattering around in a peak ring.

“The ring of mountains we observe is made of deep material uplifted and flipped on its head,” says Sean Gulick, a geophysicist at the University of Texas at Austin. Gulick co-led the Chicxulub expedition with Joanna Morgan, a geophysicist at Imperial College London.

Knowing that Chicxulub formed through dynamic collapse opens new ways to explore other worlds, says Kring. Last month, he and his colleagues showed that, like Chicxulub, the peak ring of the Moon’s 320-kilometre-wide Schrödinger crater is made of material from deep in the crust2. This means that robots or astronauts could visit Schrödinger to pick up samples of the lunar interior.

Chicxulub is the only good example of a peak-ring crater on Earth. Studying peak rings in impact basins on other worlds could confirm whether the dynamic collapse model holds true for in different environments, says David Baker, a planetary scientist at NASA's Goddard Space Flight Center in Greenbelt, Maryland, who has published on peak-ring formation3.

The Chicxulub core also explains a long-standing geophysical mystery — why seismic waves move surprisingly slowly in the peak-ring rocks. The answer is that the impact fractured the granite so much that it became much less dense than typical granite, slowing the waves’ progress.

Lower density also means that rock is more porous, providing space for microbes to move around inside. After the sterilizing heat of the Chicxulub impact had dissipated, organisms may have taken advantage of the lingering warmth. “Somehow life finds its way into these high-porosity targets and takes advantage of the habitat created,” says Gulick. An underground biosphere could have evolved over millions of years, surviving off chemical energy and warmth without sunlight.

Project scientists have found cells and microbial DNA in the Chicxulub core, but are holding details for future publications.