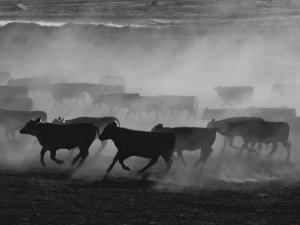 Cattle in Kansas could be placed at risk of foot-and-mouth disease if a proposed agricultural biosafety lab is built in the state.

An independent panel reviewing the dangers associated with establishing a high-security laboratory for studying animal diseases in the heart of US cattle country has found that the government has underestimated the risk that livestock will be exposed to microbes escaping from the facility. The largely critical review suggests that the proposed National Bio- and Agro-Defense Facility (NBAF), scheduled to open in 2020, continues to face significant hurdles, even as another committee explores whether it is needed at all.

The location of the NBAF has been a matter of fierce debate since 2009, when the town of Manhattan, Kansas, won a bid to host the BSL-4 facility — the most stringent designation for biological containment. The following year, the US Department of Homeland Security (DHS), which is overseeing the project with the Department of Agriculture, issued a risk assessment that drew criticism after it projected a 70% chance of escape for foot and mouth disease over the 50-year projected lifespan of the facility. The virus, which affects cattle and other cloven-hoofed animals, would have devastating consequences for the US cattle industry were it to emerge in domestic herds. Congress ordered the DHS to make changes and tied the NBAF’s funding to a revised risk assessment which the DHS made public in February. The updated assessment drastically downgraded the risk of foot and mouth disease escaping, to 0.11% over 50 years.

Now, in its review of the revised assessment, released on 15 June, a panel convened by the US National Academy of Sciences (NAS) concludes that the risk estimates are based on “questionable and inappropriate assumptions” says Greg Baecher, an engineer from the University of Maryland in College Park and chairman of the NAS review panel. The flawed calculations have led the DHS to underestimate both the likelihood and the consequences of a release from the NBAF, he says.

At a news briefing today, Baecher was quick to point out that the NBAF's design seems sound and that the latest DHS assessment includes important improvements in the way it analyses the likelihood that things could go wrong. It also takes into account environmental factors such as damage caused by tornadoes — a real possibility in Kansas and one that the first risk assessment overlooked. Some of the improvements relate to the fact that the NBAF is now much further along in its design process and therefore biosecurity measures can be more concrete and specific.

But the revised assessment still comes up short in the way it accounts for how different safety systems at the NBAF will depend on each other, and on the statistical uncertainties associated with the risk calculations, the NAS reviewers found. In particular, they say, it does not take proper account of the possibility of an escape due to operational or human error.

To Tom Manney, an emeritus professor of biology and physics at Kansas State University, which is located adjacent to the NBAF site, and chairman of the civic action group No NBAF in Kansas, the NRC review supports many of his own worries and calls the “DHS out on its underestimates of risks”. Although the concern has focused on foot and mouth disease, Manney sees zoonotic diseases — those that can spread to humans — as posing an even greater source of risk and uncertainty. Manney’s concern is echoed in the NAS's findings.

From the review panel’s perspective, “a valid scientific and technical risk analysis is quite possible for this facility. It’s just that the current report hasn’t gotten there yet,” says Baecher.

Ron Trewyn, vice-president for research at Kansas State University, points out that protocols and standard operating practices for employees are typically drafted later on in the construction phases. “Very complex procedures are involved in dealing with zoonotic diseases, and there’s no way to know what emerging diseases that the lab will be handling ten or twelve years from now and what protocols might be required,” he says.

“The findings of this assessment will be incorporated into future plans and processes of operating the NBAF as part of the iterative risk process,” DHS spokeswoman Nicole Stickel says.

To build or not to build

Whether or not the project will receive US$50 million in federal funding this year will also depend on a separate NAS report due out later this month. That report is meant to weigh whether the United States needs a BSL-4 agricultural lab.

The NBAF would replace the ageing Plum Island Animal Disease Center, a BSL-3 facility located off New York’s Atlantic coast and currently the only US facility in which diseases in large animals can be studied.

“I think all of us recognize the need to advance our research and our understanding of the diseases that affect animal populations in the United States and that could co-infect humans and understand the risks involved and the kinds of mitigation strategies like vaccines that are available,” said Mark Thurmond, a committee member and veterinarian at the University of California at Davis.

Deciding the ultimate fate of the NBAF falls to policy-makers, but the second report will consider three options: build the NBAF as planned, build a scaled-down version or don’t build it at all.

“This is a capability that the country needs and absent that capability we face other sorts of risks,” says Baecher. “So, the question of the safety of the NBAF is a question of balancing different kinds of risks.”