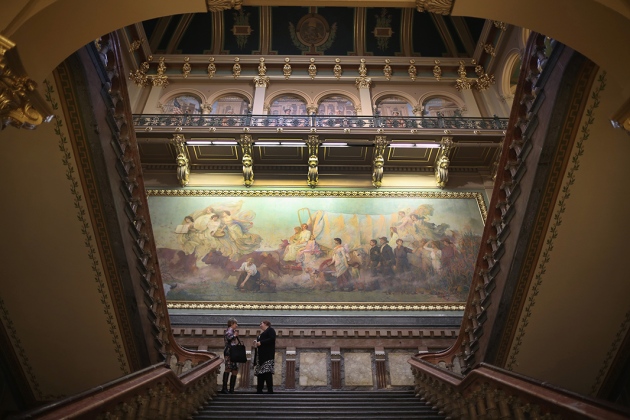 The Iowa statehouse is one of several to consider new anti-science education bills.

Last week, state legislators in Iowa introduced a bill that would require teachers in state public schools to include “opposing points of view or beliefs” in lessons on topics including global warming, evolution and the origins of life. It’s the latest in a surge of what advocacy group the National Center for Science Education calls “antiscience” bills introduced in US state houses in recent weeks.

Since last month, Indiana, Idaho, Alabama, Texas, Oklahoma and Florida have all introduced and discussed similar tweaks to the way in which they want to educate their children. A related move in South Dakota has been blocked — and researchers and science organizations that spoke up in opposition there deserve credit for doing so.

Although these proposed changes are typically presented by their supporters as giving teachers the chance to discuss genuine scientific controversies, in truth they are (very) thinly veiled attempts to pursue political and religious agendas that have no place in school science lessons — for whatever age. They seek to import the alternative facts and misleading rhetoric of the new federal government and to impose it on children who deserve much better from those elected to serve them.

In the wake of President Donald Trump’s election, many scientists in the United States have taken to asking themselves and others what they can do. Here is something: join the voices and campaigns that seek to protect educational standards, speak out against damaging changes and support others who are already doing so, including those in the education system. Get involved: visit schools, meet teachers and assist people who want to continue to offer kids the best possible education by helping to prepare materials and lesson plans.

Scientists in other US states, and indeed other countries, should also pay more attention to what is happening in school science lessons. Largely unnoticed by anyone apart from specialists, arguments are brewing over the best way to give pupils a flavour of how science is done, as well as the facts and theories that it produces. This, after all, addresses one of the most common complaints that scientists have about how the public perceives their work — that much of science is value-laden, contested and highly contingent on who asks the questions and how. And, just as for their knowledge of the periodic table and the laws of thermodynamics, most non-specialists are heavily influenced by what they learnt in their days in the classroom.

“Not all science is tentative, and researchers should not be shy about saying so.”

Some have long argued that people who do not wish to pursue scientific careers are better off being schooled in how science works rather than in its outcomes, because this helps them to assess evidence and understand unresolved scientific issues in a way that, say, knowing about the structure of DNA and knowledge of chemical reactions do not. The problem there, of course, is that such information is crucial for those who do wish to pursue science beyond school — and, at such an early age, it is difficult to distinguish one type of student from the other.

The classroom compromise has been the inclusion in many national curricula of something called the nature of science (NOS). Teachers are encouraged to talk about the scientific process, and since the late 1990s or so, a fairly robust consensus has emerged on how this can be done. As a result, school science lessons typically feature discussions on hypothesis testing and the scientific method, how data can be interpreted in different ways and how scientific knowledge is tentative, subjective and open to challenge.

Like all good scientific consensuses, this one is now subject to challenge. Critics complain that it focuses too narrowly on how science is done, and not enough on who does it and why — and how this can influence the results. (Researchers in Spain last month described how, as a possible alternative, they have introduced
into the curricula for trainee secondary-school science teachers discussions of the long and bitter dispute between Louis Pasteur and Justus von Liebig over the nature of fermentation.)

Perhaps a more pressing criticism of the way NOS is taught in schools is that it encourages rather too much doubt over scientific ideas. Many findings, after all, are well established and, indeed, taken as such by professional scientists who use them as shoulders to stand on. Not all science is tentative, and researchers should not be shy about saying so — both to those in schools and to those in charge of schools.