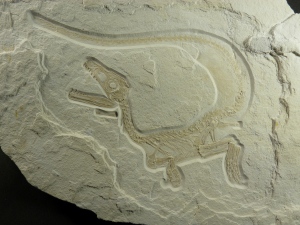 The fossil of an ancient theropod found in Germany indicates that feathers were widespread in dinosaurs.

Feathers didn’t start with birds. Plumage of various sorts — from simple fuzz to the complex structures used for flight — adorned dinosaurs first, and was only later inherited by birds. And if a beautifully preserved juvenile dinosaur unearthed in the Jurassic strata of Germany is any indication, it is possible that all dinosaurs bore patches of filamentous feathers.

Since the discovery of the fluffy theropod Sinosauropteryx in 1996, palaeontologists have recognized more than 30 types of feathered dinosaur. Most of these are coelurosaurs — a disparate group of theropods that includes not only the fearsome tyrannosaurs, sickle-clawed deinonychosaurs and bizarre therizinosaurs, but also birds.

However, there are exceptions to this rule. Palaeontologists have also discovered simple, feather-like structures along the vertebral columns of the dinosaurs Psittacosaurus and Tianyulong. These ornithischians are about as distantly related to birds as dinosaurs can be, and the discoveries hinted that swaths of simplified protofeathers were a common feature among dinosaurs. The discovery of the most recent fossil indicates that feathery body coverings were widespread in these creatures.

The 150-million-year-old theropod Sciurumimus albersdoerferi unearthed in Germany and described today1 was coated in a form of plumage. The filamentous structures have been seen before in other dinosaurs, but what makes Sciurumimus so noteworthy is that this dinosaur was a megalosauroid.

Megalosauroids were a group of archaic sharp-toothed dinosaurs near the base of the theropod family tree, and greatly removed from the various types of feathered dinosaur and early birds recognized so far. According to first author Oliver Rauhut, a palaeontologist at the Ludwig Maximilian University in Munich, Germany, this means that simple feathers were a very ancient dinosaur trait. The filaments of Sciurumimus, Rauhut says, are very similar to the simple structures seen in Psittacosaurus, Tianyulong and even pterosaurs — extinct flying reptiles that were the closest cousins that dinosaurs had. The wide evolutionary spread of this characteristic means that protofeathers are probably as old as the Dinosauria itself.

Palaeontologist Paul Barrett of London’s Natural History Museum agrees that the structures on Sciurumimus are probably protofeathers. Although additional geochemical work is needed to study the features' details, Barrett says, the fossilized wisps are very similar to the fuzz seen on other dinosaurs. But he notes that the presence of these filaments among all dinosaurs is “speculation”. Feathery structures might be a common feature of dinosaurs, but it’s also possible that they evolved multiple times. “We need more examples in both non-coelurosaurian theropods, and particularly in the other big dinosaur groups, before we can really speculate that these features are a character of dinosaurs as a whole,” Barrett says.

Rauhut is sure there are many more feathery dinosaurs yet to be found. The trick will be finding specimens in the sorts of fine-grained sediments capable of preserving feather fossil. But on the basis of findings from Sciurumimus and other feathery dinosaurs, Rauhut notes, “all dinosaurs had at least this kind of simple, hair-like feathery integument”. Instead of being a novelty that evolved among particularly bird-like dinosaurs, “feathers seem to be an ancestral dinosaurian trait”, Rauhut says. If so, we will have to start thinking about what kind of feathery covering these creatures display when we depict them in art and film.