Archaeology in Libya finally has a chance to flower. Research into and conservation of the country's rich cultural heritage could expand in the wake of this year's revolution, after decades of neglect by the Gaddafi regime, say scientists. But political and security uncertainties look set to delay the return of the foreign archaeologists needed to work with Libyans to develop their archaeological capacity. 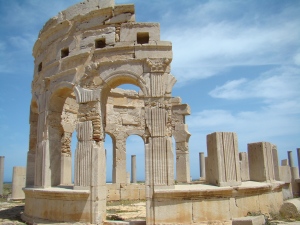 The Roman ruins of Leptis Magna are one of the sites to which archaeologists are hoping to return in the wake of the Libyan conflict.

Revamping its archaeology risks being a low priority for a country recovering from conflict, the fledging government of which must not only rebuild schools, hospitals and roads, but also create a democratic civil society. But researchers agree that there is an opportunity to begin planning how to reinforce Libya's archaeological base and develop plans that might attract domestic and international support.

"It is moments like these when big directions are taken by design or default, and those who care about heritage should aim for design," says William Brown, a senior fellow at the Brookings Institution in Washington DC, a non-profit public-policy organization, who this month published an article calling for Libya to add protection and research of its heritage to its new constitution.

Until now, archaeology in Libya has been heavily dependent on joint missions with foreign experts. A key research objective is to train a new generation of Libyan archaeologists abroad that can ultimately take control of the nation's cultural heritage, says Savino di Lernia, an ethnoarchaeologist at the La Sapienza University of Rome, and head of the Italian–Libyan Archaeological Mission in the Acacus and Messak, an expedition to study prehistoric archaeology and rock art.

Foreign researchers will have a crucial role in getting Libyan archaeology moving again, by returning to fieldwork and resuming collaborations with the nation's Department of Antiquities. All foreign researchers left, or were evacuated from, Libya at the beginning of the conflict in February (see 'Libya's 'extraordinary' archaeology under threat'), and none has yet returned, but many hope to do so soon.

Di Lernia has applied for a visa to visit Libya by the end of the month, to assess the security situation and the prospects for a return to work in the near future. He hopes to resume his research next year, but fears that a lack of government control in the remote southern region where he works, and the immense number of weapons in the country, may pose barriers.

Colleagues working at sites in the coastal north may be able to return sooner, he says, because the government is stronger there, and sites are more contained and so easier to secure.

Research visits are also needed to assess the extent of any damage or looting. There is no evidence that damage has been widespread, but scientists emphasize that the situation is far from clear.

A four-person inspection team from the International Committee of the Blue Shield in the Hague, the Netherlands — the cultural equivalent of the Red Cross — and the International Military Cultural Resources Working Group, which liases between experts in cultural heritage and the military, visited the country's five world-heritage sites, plus a few others, in late September. It reported that most had not been seriously damaged, and were currently well protected.

Sporadic reports from other sites have also been reassuring, but di Lernia emphasizes that there has been no comprehensive damage assessment, and the fate of many sites, particularly in the south, is unknown. The United Nations Educational, Scientific and Cultural Organization agreed in October to send an inspection mission soon, but it is now uncertain whether this will go ahead, following the withdrawal of US funding for the agency (see 'Palestinian membership puts UN projects at risk').

The post-revolutionary period itself carries risks for archaeology — from bulldozers and bricks, rather than bombs and bullets. Damage from infrastructure development has been a problem since the Libyan economy opened up when international sanctions began to be lifted in 2003.

"I've seen so much destruction of archaeology in Libya that it's heartbreaking," says David Mattingly, an expert in Roman archaeology at the University of Leicester, UK. Reconstruction of the country is likely to result in a surge of development of oil and industrial infrastructure, housing and tourism, which risks doing irreversible damage to its cultural heritage.

"The Department of Antiquities has neither the staff nor the resources to combat the tidal wave of development," says Paul Bennett, head of mission at the Society for Libyan Studies in London. "Everything is vulnerable. There's a need to develop, from a standing start, a cultural-resource management in Libya that doesn't really exist at the moment."

"There are large areas of the country, in particular the desert, that have never been mapped, but which are full of the most extraordinary sites," says Mattingly. This month, he reported the discovery of more than 100 unmapped, well preserved fortified farms and villages, some up to 2,000 years old. The settlements belonged to the Garamantes, a technologically advanced people who created what was perhaps the first indigenous state in the central Sahara.

Finding 100 new villages in a satellite survey of a zone just 600 square kilometres is "extraordinary", says Mattingly, and indicates how much of Libyan archaeology remains to be discovered. Large swathes of the country are literally a rolling landscape of archaeological sites, he adds.

The shortage of maps hindered NATO’s efforts to compile a list of archaeological sites to be avoided by air strikes, as required under international law. The Blue Shield cobbled together a rough list by consulting researchers, including Mallingly and di Lernia. This list "worked very well", says di Lernia, at least in the North where more damage assessments have been made.

Ultimately, controlled development could help archaeology: oil companies increasingly share their maps and surveys with researchers, and archaeological tourism could bring in funds and show Libyans the value of their archaeology. "It's potentially a fantastic opportunity," says Bennett.