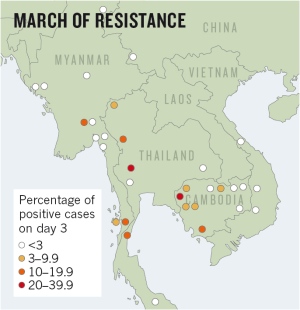 In parts of southeast Asia, artemisinin-based malaria drugs are taking longer to clear the parasite out of the body, so that patients still test positive after several days of treatment, instead of testing negative after the usual two days.

Mutations in the malaria parasite that underlie its resistance to the potent drug artemisinin have been pinpointed for the first time. By testing for these genetic variants, public-health officials now plan to map malaria strains that are impervious to the drug in southeast Asia, with the hope of stemming their spread to Bangladesh, India and Africa.

"If full-blown artemisinin resistance were to reach Africa, it could be, truly, a global health catastrophe," says Christopher Plowe, a malariologist at the University of Maryland in Baltimore.

“We will very soon know where artemisinin resistance is and where it has spread,” says Pascal Ringwald, a co-author of the latest study and the coordinator of drug resistance and containment for the Global Malaria Programme of the World Health Organization in Geneva, Switzerland. His team's paper is published today in Nature1.

Artemisinin is made from sweet wormwood (Artemisia annua), a plant used in traditional Chinese medicine. In the 1960s and early 1970s, China operated a secret military research programme to combat resistance to another malaria drug, chloroquinone, and researchers discovered that the plant’s extract removed malaria parasites from the blood of infected mice and, later, humans.

When used in combination with one of several other malaria drugs, artemisinin-based drugs typically vanquish the malaria parasite Plasmodium falciparum from people's blood within two days. But from the early 2000s in western Cambodia, health officials noticed malaria cases that took longer to clear — up to five days. And some strains were completely unaffected by artemisinin. Resistant strains have since popped up in regions that neighbour Cambodia in Vietnam, Myanmar and Thailand.

Labs around the world have searched doggedly for the genes behind artemisinin resistance. Previous work discovered a large region in one of the parasite's chromosomes that was linked to resistance, by looking for genetic variants in the parasite associated with their response to artemisinin2.

For the current study, a team led by Frédéric Ariey, a malaria researcher at the Pasteur Institute in Paris, instead set out to grow parasites that evolved artemisinin resistance in their lab. Beginning with a drug-sensitive strain collected from a malaria patient in Tanzania, they grew the strain around an artemisinin drug and then removed it when the parasite’s growth flagged. After five years and dozens of cycles of this regime, the researchers produced a culture brimming with artemisinin-resistant malaria parasites.

Genome sequencing revealed a handful of variations in seven genes that potentially conferred resistance. The team compared its list with sequences of artemisinin-resistant strains from Cambodia to hone in on the gene encoding a protein named kelch K13. More sequencing of Cambodian strains revealed another 17 mutations that were strongly linked to artemisinin resistance — all located in a portion of the K13 protein known as its propeller domain.

Researchers know little about this protein’s usual role in the malaria parasite, nor how the mutations confer drug resistance; and artemisinin’s mode of action is itself mysterious. But Ariey says that the existence of so many mutations suggests that artemisinin resistance has emerged repeatedly in Cambodia. Scientists who have had an early look at the results have found still more K13 mutations linked to resistance, Ariey says.

“One of the really worrying features of this data is that we clearly see multiple independent origins of resistance alleles occurring in just Cambodia,” suggesting that artemisinin resistance is a common adaptation, says Timothy Anderson, a geneticist at the Texas Biomedical Research Institute in San Antonio.

Dominic Kwiatkowski, a population geneticist at the Wellcome Trust Sanger Institute near Cambridge, UK, says that other genes are likely to be involved in artemisinin resistance, perhaps working in concert with the K13 mutations, but that focusing on this gene is “a great starting point”.

Scientists involved in malaria control in southeast Asia are already gearing up to map the prevalence of the mutations across the region. At a 9-10 December meeting in Bangkok to set research priorities for malaria elimination, officials decided that mapping K13 mutations would be their main goal, according to Plowe, who attended the meeting.

Those surveys for drug resistant mutations, Ringwald says, will help health officials direct resources, as a part of an on-going effort to eliminate malaria in Southeast Asia. “If [artemisinin resistance] is more extensive than we thought, we’ll need to go back to donors and say we’ll need more money.”