Questions of paper authorship have been plaguing scientists on social media recently. Who should come first? And who deserves to be listed at all? When it comes to papers with numerous authors, the publishing process can get messy. For instance, when Dorothy Bishop, a psychologist at the University of Oxford, UK, found herself trying to review a paper blemished with mistakes, she tweeted: 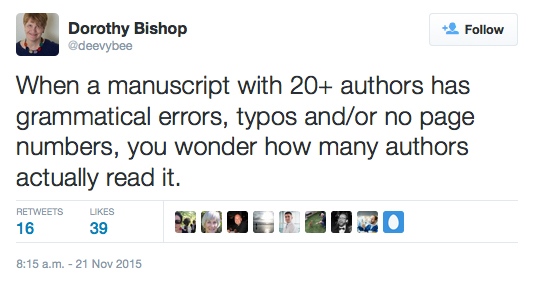 Others took a less dark view of such errors. Deirdre Toher, a statistician at the University of the West of England in Bristol, UK, tweeted that the logistics of implementing changes from multiple researchers may have led to the mistakes:

On Twitter, Bishop stuck to her original theory that “lots of people have got their name on without actually doing anything”. She admitted, however, that she might be being cynical.

Toher told Nature that she was being “optimistic” about the intentions of the paper’s authors. She nevertheless recommended that scientists should designate one author to check spelling and grammar.

Another problem faced by researchers with many co-authors was raised by Jim Grange, a cognitive psychologist at Keele University near Stoke-on-Trent, UK:

Grange told Nature that positions on author lists are usually subjective, and that their associated norms vary between disciplines. In psychology, for example, the first author is usually (but not always) the researcher who has done the most work.

In response, two researchers recommended point-based criteria for drawing up the ideal authorship order. Rogier Kievit, a neuroscientist at the University of Cambridge, UK, tweeted: 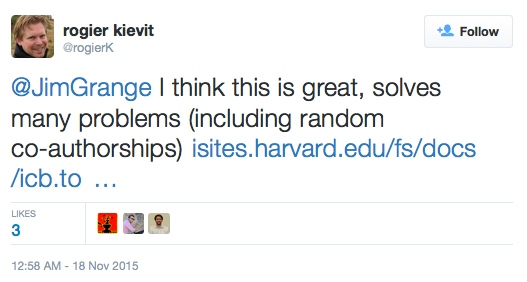 Kievit’s recommended ranking allocates points to authors on the basis of six criteria — 250 for the idea, 100 for the study design, 100 for implementation, 100 for conducting experiments, 200 for data analysis and 250 for writing the paper. Author lists are then arranged by descending points.

Another ranking, suggested on Twitter by Claudia von Bastian, a cognitive psychologist at the University of Colorado Boulder, was published in the Journal of Counseling & Development in 1985, and acknowledges and rewards more granular tasks such as selection of lab instruments, statistical tests and literature research.

Nick Byrd, a PhD candidate studying philosophy and cognitive science at Florida State University in Tallahassee, pondered the deeper question of what it means to be a co-author in the first place: 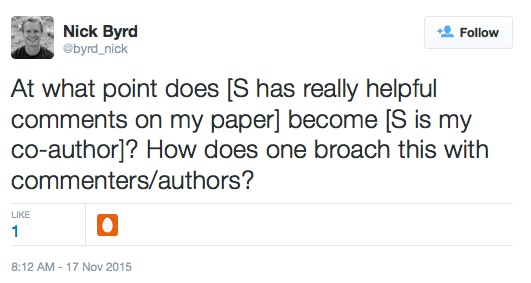 Conny Rhode, a PhD student in psychology at the University of York, UK, responded: “Has S made any *indispensable* contribution to the original idea at the heart of the paper or to getting the paper published?....”

But Byrd speculates that this idea would be difficult to implement. He told Nature that it “is hard to tell exactly which parts of it made it publishable. So it would be hard to tell if someone has given comments that are indispensable to getting the paper published”.

While researchers globally struggle with this and other authorship questions, one anonymous researcher on the Academia Stack Exchange, a question-and-answer site for academics, asked whether they could add their baby to the author list “to protest against co-authors that haven't made any contribution”.

And biostatistician Sherri Rose at Harvard Medical School in Boston, Massachusetts, knows one individual who will not be making her paper’s author list: 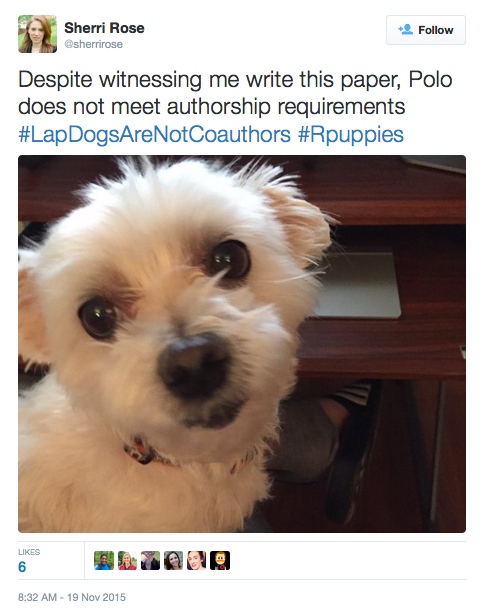