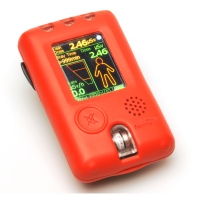 Dosimeters are worn by people who are regularly exposed to radiation during their work to keep track of exposure levels.

For decades, researchers have been trying to quantify the risks of very low doses of ionizing radiation — the kind that might be received from a medical scan, or from living within a few tens of kilometres of the damaged Fukushima nuclear reactors in Japan. So small are the effects on health — if they exist at all — that they seem barely possible to detect. A landmark international study has now provided the strongest support yet for the idea that long-term exposure to low-dose radiation increases the risk of leukaemia, although the rise is only minuscule (K. Leuraud et al. Lancet Haematol. http://doi.org/5s4; 2015).

The finding will not change existing guidelines on exposure limits for workers in the nuclear and medical industries, because those policies already assume that each additional exposure to low-dose radiation brings with it a slight increase in risk of cancer. But it scuppers the popular idea that there might be a threshold dose below which radiation is harmless — and provides scientists with some hard numbers to quantify the risks of everyday exposures.

“The health risk of low-dose radiation is really very tiny, but the public is very concerned,” says Bill Morgan, who heads a systems-biology programme in low-dose radiation at the Pacific Northwest National Laboratory in Richland, Washington, and chairs the committee on radiation effects at the International Commission on Radiological Protection (ICRP) in Ottawa, Canada. That concern has driven a lot of investment in programmes trying to quantify the risk, he says. The European Commission, for example, has a 20-year road map to assess the problem. “We don’t do a very good job of explaining ourselves to the public, which finds it hard to put radiation risks in context — some people go to radon spas to treat their rheumatism while others won’t board planes for fear of cosmic rays,” he adds.

Ionizing radiation — the kind that can pull electrons from atoms and molecules and break DNA bonds — has long been known to raise the risks of cancer; the higher the accumulated dose, the greater the damage. But it has proved extremely difficult to determine whether this relationship holds at low doses, because any increase in risk is so small that to detect it requires studies of large numbers of people for whom the dose received is known. A study of more than 300,000 nuclear-industry workers in France, the United States and the United Kingdom, all of whom wore dosimeter badges, has provided exactly these data. A consortium of researchers coordinated by the International Agency for Research on Cancer (IARC) in Lyon, France, examined causes of death in the workers (one-fifth of whom had died by the time of the study) and correlated this with exposure records, some of which went back 60 years.

The workers received on average just 1.1 millisieverts (mSv) per year above background radiation, which itself is about 2–3 mSv per year from sources such as cosmic rays and radon. The study confirmed that the risk of leukaemia does rise proportionately with higher doses, but also showed that this linear relationship is present at extremely low levels of radiation. (Other blood cancers also tended to rise with radiation doses, but the associations were not statistically significant.) The results were published on 21 June.

“The health risk of low-dose radiation is really very tiny, but the public is very concerned.”

“It is a solid, unusually large study of individuals exposed to very low doses of ionizing radiation,” says epidemiologist Jørgen Olsen, director of the Danish Cancer Society Research Center in Copenhagen. The finding implies that some cases of leukaemia will even be caused by a high level of natural background radiation, he adds, “though the increased risk for an individual is going to be vanishingly small”.

ICRP recommendations, which most national radiation-protection agencies follow, already call for monitoring of individuals whose annual exposure is likely to exceed 6 mSv. They restrict exposure to 20 mSv annually over 5 years, with a maximum of 50 mSv in any one year. Researchers found that 531 of the workers died from leukaemia during the average 27 years they spent in the industry; the data suggest that 30 of those deaths could be attributed to the radiation. Even in this large study, there was no direct evidence that workers who had accumulated extremely low doses of radiation (below a total of 50 mSv) had an increased risk of leukaemia, says Olsen. But a mathematical extrapolation of the data suggests that each accumulation of 10 mSv of exposure raised a worker’s risk of leukaemia by around 3%, compared to the average risk of the group of workers in the study.

The data also challenge an ICRP assumption that accumulated low-dose exposure gives a lower risk of leukaemia than does a single exposure to the same total dose (based on the idea that the body has time to recover if the assault comes in tiny, spread-out doses). But such details are unlikely to change the overall ICRP recommendations, which are deliberately conservative, says Thomas Jung, from Germany’s Federal Office for Radiation Protection in Munich.

A major, and increasing, source of low-dose radiation comes from the medical world, says David Richardson, an epidemiologist at the University of North Carolina and an author of the study. “The amount of radiation a US person receives in a year on average has doubled, mostly because of medical procedures,” he says (see ‘Rising background’). Computed-tomography (CT) scans are to blame for most of the rise; a typical abdominal scan delivers more than 10 mSv. Radiologist David Brenner of Columbia University in New York has calculated that of the 25 million people having CT scans in a year, 1 million will have accumulated more than 250 mSv over the previous 20 years. 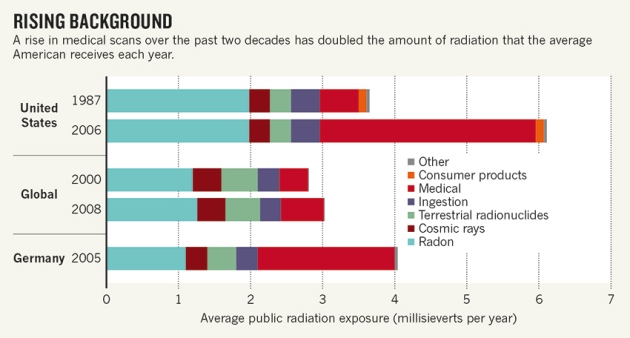 SOURCE: UN Scientific Committee on the Effects of Atomic Radiation

One group that needs to pay particular attention to the findings are the tens of thousands of health workers who use radiological imaging to guide catheters through blood vessels of patients to reach into their hearts and brains, says Martha Linet, at the US National Cancer Institute’s radiation epidemiology programme in Bethesda, Maryland. These minimally invasive operative procedures are used ever more frequently, she says.

Epidemiological studies suggest that radiation exposure has health effects beyond cancer. The IARC-led consortium is now looking at the effect on solid cancers, and also on diseases such as heart attack and stroke. Other studies are under way to study the long-term impact of low-dose radiation on different cohorts. One, the Epi-CT study, is recruiting one million people from nine European countries who had CT scans as children; its analysis will be complete by 2017. In another, the Helmholtz Center Munich is analysing heart tissue from workers who died in the Mayak uranium mines in the South Urals, Russia.

Although the European Commission has been funding research on low-dose radiation for some time, equivalent programmes in the United States have stalled. In 2013, scientists wrote an open letter to the White House Office of Science and Technology Policy calling for renewed investment, and a bill is currently being debated in Congress calling for more work.

Getting funding for such studies is important, says Mike Atkinson, head of radiation biology at the Helmholtz Center Munich. Being able to quantify the effects of radiation will help doctors to balance risk against benefit when deciding whether to put children in CT scanners, he says. And further understanding the health impacts of low-dose radiation might aid decisions about how much remedial activity is needed to clean up soil contaminated by radioactivity from accidents or nuclear-power works, says Morgan.

The original version of this article incorrectly calculated an ‘expected’ death rate from leukaemia among the workers, and as a result, the risk posed by radiation increments was wrong. The story has been corrected to reflect this.