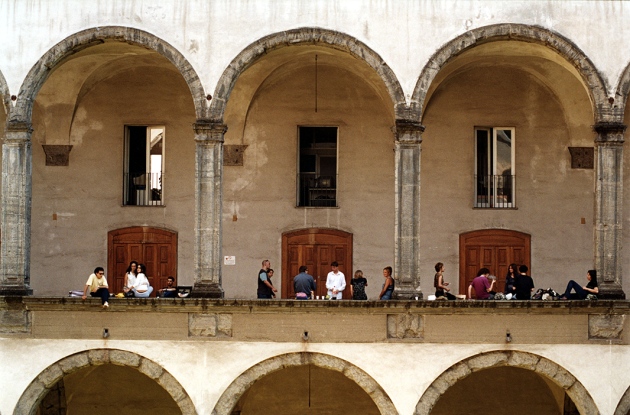 The University of Naples, where Italian police have been investigating allegations of research misconduct since 2012.

More than five years ago, Italian police began investigating allegations of research misconduct in papers by Alfredo Fusco, a prominent cancer scientist in Naples. Researchers frustrated by the case’s slow progress have now told Nature that there is strong evidence that dozens of papers may contain manipulated data — and that a commercial photography studio was called in to cut and paste images. They say they are speaking out about the magnitude of the allegations because of their increasing impatience with the slow pace of investigations by police and by academic authorities. The failure to resolve the affair is harming Italian science, they say.

Fusco, who works at the University of Naples, has been under investigation since 2012, when bioinformatician Enrico Bucci told police that several of Fusco’s papers contained images of electrophoretic gels — used to separate molecules — in which sections seemed to have been cut and pasted to mimic the presence or absence of particular molecules.

Since then, the catalogue of papers under suspicion has grown, and the Naples public prosecutor who is handling the case has told Nature that “it is clear that some images have been manipulated”. Stefania Buda says she still needs “some more months” to decide whether or not to launch criminal charges against Fusco.

Data manipulation would not in itself be a criminal offence, say experts close to the investigation; a criminal charge would revolve around the alleged use of fraudulent data to acquire funding.

Perhaps the most unusual allegation is that a local photographic studio was regularly asked to alter scientific images before publication, say scientists at the University of Naples who do not wish to be identified. This claim was first reported in 2013 in an Italian newspaper, after a police raid on Fusco’s labs in which computers and lab books were confiscated.

Meanwhile, Bucci, who now runs research-integrity consultancy Resis in Turin, Italy, has separately examined 380 papers co-authored by Fusco between 1985 and 2015, and says he now thinks that 95 of them contain manipulated figures.

Fusco denies all these allegations. “We have not intentionally manipulated any publication,” he told Nature in an e-mail. Although ten of his papers have already been retracted, and ten corrected, any image alterations that may have occurred in his papers were “mistakes” made as figures were assembled, Fusco says. “I was not aware of it, since I do not participate in the assembling of the figures,” he adds.

The drawn-out nature of the investigation is particularly worrying for the Italian Association of Cancer Research (AIRC) in Milan, a charity that had been funding Fusco but suspended its grant payments four years ago after hearing about the investigation. “This is an issue of great concern and embarrassment to us,” says Federico Caligaris-Cappio, the AIRC’s scientific director. “It’s important that these allegations are fully aired and finally resolved, one way or the other — so we can get certainty.” 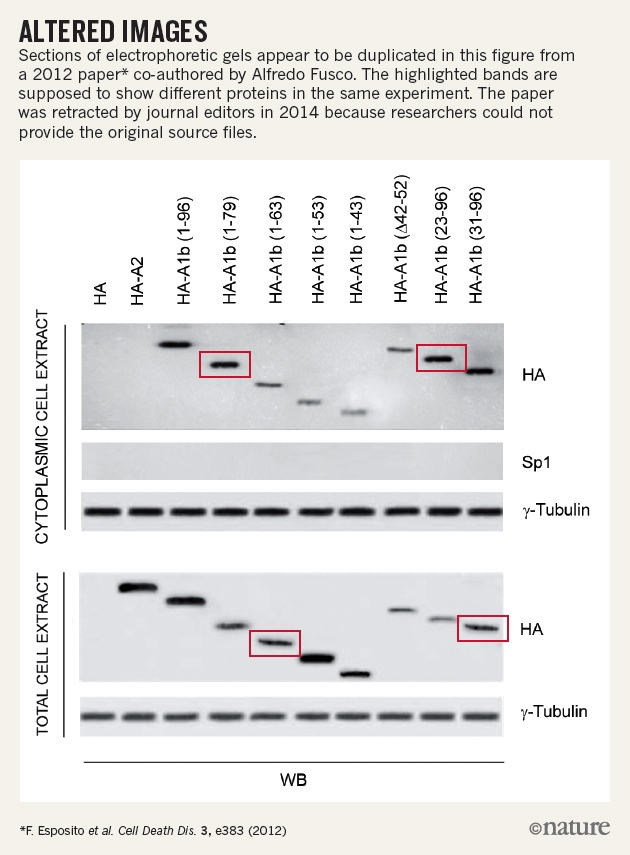 Fusco previously held advisory positions with the AIRC, but as a result of the investigation he is now excluded from them. Since 2002, the AIRC has awarded him more than €4 million (US$4.4 million) in grants and stipends. “Once we have an answer from the court on whether or not any of the allegations are correct, we will discuss whether we want to try to reclaim any part of this money,” says Caligaris-Cappio.

After newspaper reports about the resulting police raid, the university did set up an internal investigation committee in 2013. Its chair, Roberto Di Lauro, had himself co-authored papers with Fusco. The committee members examined nine of Fusco’s publications. Their unpublished report, which Nature has seen, says that they saw no evidence of misconduct. It adds that the papers could not in any case have influenced grant decisions.

“It’s important that these allegations are fully aired and finally resolved, one way or the other — so we can get certainty.”

But that report has been heavily criticized by an ethics committee of the Italian National Research Council (CNR), which the University of Naples asked to examine its investigation-committee procedures. In its own confidential report, which Nature has also seen, the CNR flags Di Lauro’s apparent conflict of interest — he co-authored seven papers with Fusco before 1999 and two after 2011. It also criticizes the committee’s decision to analyse images with the naked eye, instead of using commonly available software. And the report decries the apparent downplaying of any consequences of the claimed data manipulation.

Di Lauro told Nature that he had disclosed his co-authorship to the internal committee, whose report indicates that members unanimously discounted it as a conflict of interest. He says the committee didn’t use software to check the images so as to avoid unnecessary duplication of the ongoing police investigation.

Gaetano Manfredi, rector of the University of Naples since 2014, says that once the outcome of the criminal investigation is known, he will initiate a new independent investigation into possible scientific misconduct. In the meantime, the university has decided that Fusco’s papers must be approved by his department head before submission, he says. And the university has set up a system for investigating misconduct allegations.

The entire saga “has been damaging for the scientific community and for the institutions in Italy”, says Gerry Melino, a cell biologist who was involved in the investigation, and who has positions at the University of Leicester, UK, and the University of Rome Tor Vergata. Melino is editor-in-chief of two journals that have retracted Fusco’s papers. He says that the long wait for the affair to be resolved is making life difficult for many in the research community, particularly Fusco’s co-authors. “It is in the general public interest to see this sad episode concluded one way or another.”