The creation in the laboratory of strains of the H5N1 avian flu virus that are highly transmissible in mammals could eventually open the door for research towards improving pandemic preparedness. But concerns have been raised that the proliferation of such work would amplify the risk of accidental or intentional release of a virus that could spark a human pandemic.

Ron Fouchier and Ab Osterhaus, flu researchers at the Erasmus Medical Center in Rotterdam, the Netherlands, led the team that mutated an H5N1 virus and identified a set of five mutations that made it both highly transmissible and lethal in ferrets. They defend and explain the potential benefits of their work. 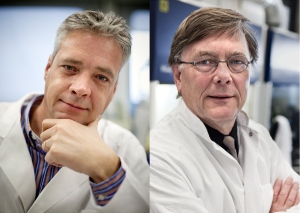 You have argued that scanning of animal populations for these mutations could give early warning of, or avert, a pandemic. But with our scant global viral-surveillance surely that's unrealistic?

It's true that some rich countries should do more to help boost the current levels of virus surveillance in outbreak areas. But several affected countries are already doing a fabulous job, given their limited means. The sequences available in public databases under-represent the sequences that have been generated in or with the affected countries. Hopefully, the World Health Organization's new Pandemic Influenza Preparedness Framework for the sharing of influenza viruses will ensure that those sequences end up in public databases faster in the future. Rather than accepting the situation, we should improve our sequencing and reporting efforts. Also, warnings weeks after dangerous viruses have emerged in poultry or mammals may be better than no warnings at all.

But given the political and economic realities, do you think real-time genetic surveillance is going to be an option any time soon?

Part of the inertia today stems from inconsistent scientific advice about the public-health threat posed by H5N1 viruses. Our research may result in a more unanimous voice from the scientific community about the danger of outbreaks in poultry and other animals. The way in which the international funds are being spent should be reconsidered. Our research may help in that decision-making process.

Even if a candidate pandemic virus were to be detected in poultry, eliminating it by mass-culling of affected flocks would seem next to impossible in countries in which H5N1 is endemic.

Some developing countries have done a much better job than others of depopulation — several are even doing better than some more-developed countries. Others may need some help and convincing. These cannot be arguments to not share information from experiments like ours with developing countries, these are arguments for better collaboration, making use of all the available information.

The H5N1 virus could become pandemic in many ways besides the mutations you describe. Might focusing only on these mutations risk spawning a false sense of security?

The mutations that we identified represent clearly identifiable biological traits. We are interested in the specific mutations, but even more so in the biological traits they represent. The biological traits associated with the mutations we identified for airborne H5N1 virus are similar to those identified in previous pandemic viruses. It thus appears that the emergence of viruses with an ability to transmit between mammals follows common pathways, with a limited set of biological and genetic changes required. Furthermore, even if these are not the only important mechanisms, their surveillance will add to greater alertness and preparedness. We clearly would not want this to lead to a false sense of security, but this argument is no reason for not increasing the vigilance and preparedness with the means we currently have available.

All five mutations generated in your lab have been seen in the wild, but not all together. How many co-existing mutations should be required to trigger emergency control measures?

This is a decision for the near future. We now know what it takes for the virus to be airborne; next the public-health and animal-health communities need to decide on when to take action. One or a combination of two mutations have been out there for a while, so perhaps having three may be a trigger. Taken together, we strongly feel that the benefits of sharing of this state-of-the-art data by far outweigh the potential risks. The fact that some outbreak countries are not yet fully capable of making optimal use of such data should not lead to the fatalistic conclusion not to generate and share the data from such research as they emerge. The primary goal of our research has direct short-term and mid-term implications for awareness of the pandemic potential of H5N1 viruses, surveillance and pandemic preparedness. Obviously it has a long-term, blue-skies impact too, which makes it all the more important that the work gets published in full to let the blue-sky components attract participation by the entire spectrum of life-science researchers.