After an unplanned five-year detour, Japan’s Venus probe, Akatsuki, has come back to life with a bang. On 4–8 April, the Japan Aerospace Exploration Agency (JAXA) presented the first scientific results from the spacecraft since it was rescued from an errant orbit around the Sun and rerouted to circle Venus, four months ago. These include a detailed shot of streaked, acidic clouds and a mysterious moving ‘bow’ shape in the planet’s atmosphere. 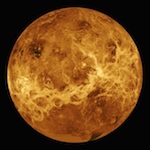 Despite the probe’s tumble around the Solar System, its instruments are working “almost perfectly”, Akatsuki project manager Masato Nakamura, a planetary scientist at JAXA’s Institute of Space and Astronautical Science in Sagamihara, Japan, announced at the Inter­national Venus Conference in Oxford, UK. And if another small manoeuvre in two years’ time is successful, he said, the spacecraft might avoid Venus’s solar-power-draining shadow, and so be able to orbit the planet for five years, rather than the two it was initially assigned.

Akatsuki, which means ‘dawn’ in Japanese, launched in 2010 and was supposed to enter into orbit around Venus later that year to study the planet’s thick atmosphere. The mission would include looking for signs of active volcanos and other geology. But upon entry, a fault in a valve caused the probe’s main engine to blow, and the craft instead entered an orbit around the Sun. As Akatsuki passed near Venus in December, JAXA engineers managed to salvage the mission by instructing the craft’s much smaller, secondary thrusters to push it into a looping elliptical orbit around the planet. The results presented in Oxford were captured from this vantage point with a suite of five cameras that capture light ranging from infrared to ultraviolet.

A highly detailed shot of dense layers within Venus’s sulfuric acid clouds elicited applause from the audience. The highest-quality infrared image of this view of Venus, it suggests that the processes that underlie cloud formation might be more complicated than thought, project scientist Takeshi Imamura told attendees. 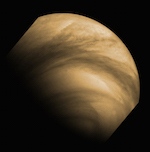 And the team expects still better results to come. The image was taken from 100,000 kilometres away — more than 10 times the probe’s distance at its closest pass of Venus. “We will achieve better spatial resolution still,” said Takehiko Satoh, principal investigator for the probe’s 2-micrometre infrared camera, IR2, which took the image. “We promise to give a fantastic data set to the research community for years.”

The bow shape, which was seen in thermal images taken using a long-wave infrared (LIR) camera, provided some intrigue. The moving cloud formation, which swept from pole to pole across the planet for days, seemed to rotate with Venus’s surface, rather than with its much quicker-moving atmosphere.

The motion suggests that the front could be linked to features on the ground, said Makoto Taguchi, who leads the LIR camera. Others at the conference were at a loss as to what may have caused it. “It’s certainly mysterious,” says planetary scientist Suzanne Smrekar of NASA’s Jet Propulsion Laboratory in Pasadena, California.

Akatsuki’s success has cheered researchers, especially because it is now the only working probe deployed at Venus. “The mood is very good,” says Colin Wilson, a planetary scientist at the University of Oxford, UK. Akatsuki’s orbit — which was tweaked slightly on 4 April to give the probe the best chance of lasting for years to come, as well as to provide a good scientific vantage point — will allow it to survey Venus’s equator as originally planned. The resulting images will complement surveys of the planet’s poles from the European Space Agency’s Venus Express orbiter, which ended its mission in 2014.

But Akatsuki’s new lease of life comes with compromises, too. Its current 10.5-day operational orbit takes it almost 5 times as far from Venus at its most distant point than its original intended orbit (see ‘Orbital alteration’). Except for those taken during the short period when the probe sweeps close to the planet, images will be lower in resolution than planned. This means that studies that require detail, such as spotting flashes of lightning, will take longer. But the team said that it plans to make the best of the probe’s wide orbit to take whole-Venus images that track large-scale features over time. 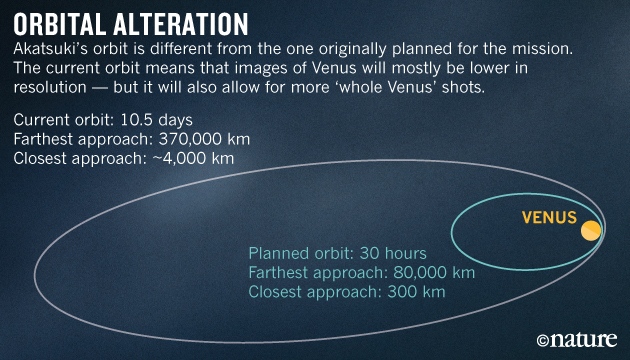 The mission has also not shrugged off all consequences of its long and unexpected cruise around the Sun. One camera malfunctioned in January, probably because of gradual contamination of a helium coolant with water vapour over the years, said Satoh. Engineers have now fixed the problem by warming the coolant to disperse the vapour, but it took a while. “We had a painful blank of about a month,” says Satoh.

Planetary scientists outside of JAXA will have to wait a year from acquisition to access the data, but they are nonetheless excited by the probe’s initial success. Two Venus-based projects are among five proposals shortlisted by NASA for possible launch in the early 2020s. The agency is expected to decide by the end of December, and Venus missions could get a boost from Akatsuki’s success — especially if the orbiter finds intriguing features that require follow up, says Smrekar, who leads one of the Venus proposals that NASA is considering, the proposed VERITAS radar orbiter. “If they’re able to see new volcanism, for example, it definitely makes the case for going back to explore more fully,” she says.