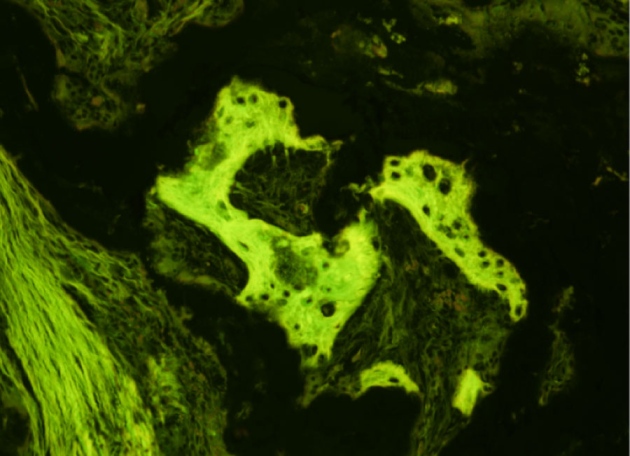 New bone formation (stained bright green under ultra-violet light) was seen in monkeys given their own reprogrammed stem cells.

A major concern over using stem cells is the risk of tumours: but now a new study shows that It takes a lot of effort to get induced pluripotent stem (iPS) cells to grow into tumours after they have been transplanted into a monkey. The findings will bolster the prospects of one day using such cells clinically in humans.

Making iPS cells from an animal's own skin cells and then transplanting them back into the creature also does not trigger an inflammatory response as long as the cells have first been coaxed to differentiate towards a more specialized cell type. Both observations, published in Cell Reports1 today, bode well for potential cell therapies.

“It's important because the field is very controversial right now,” says Ashleigh Boyd, a stem-cell researcher at University College London, who was not involved in the work. “It is showing that the weight of evidence is pointing towards the fact that the cells won't be rejected.”

Pluripotent stem cells can be differentiated into many different specialized cell types in culture — and so are touted for their potential as therapies to replace tissue lost in diseases such as Parkinson’s and some forms of diabetes and blindness. iPS cells, which are made by reprogramming adult cells, have an extra advantage because transplants made from them could be genetically matched to the recipient.

Researchers all over the world are pursuing therapies based on iPS cells, and a group in Japan began enrolling patients for a human study last year. But work in mice has suggested controversially that even genetically matched iPS cells can trigger an immune response, and pluripotent stem cells can also form slow-growing tumours, another safety concern.

Cynthia Dunbar, a stem-cell biologist at the National Institutes of Health in Bethesda, Maryland, who led the new study, decided to evaluate both concerns in healthy rhesus macaques. Human stem cells are normally only studied for their ability to form tumours in mice — as a test of pluripotency — if the animals’ immune systems are compromised, she says.

“We really wanted to set up a model that was closer to human. It was somewhat reassuring that in a normal monkey with a normal immune system you had to give a whole lot of immature cells to get any kind of tumour to grow, and they were very slow growing.”

Dunbar and her team made iPS cells from skin and white blood cells from two rhesus macaques, and transplanted the iPS cells back into the monkeys that provided them. It took 20 times as many iPS cells to form a tumour in a monkey, compared with the numbers needed in an immunocompromised mouse. Such information will be valuable for assessing safety risks of potential therapies, Dunbar says. And although the iPS cells did trigger a mild immune response — attracting white blood cells and causing local inflammation — iPS cells that had first been differentiated to a more mature state did not.

Although this was the first study to look at undifferentiated iPS cells transplanted back into the monkey they came from, it is not the first primate study to monitor how cells differentiated from iPS cells fare when transplanted. Scientists at Kyoto University in Japan found that monkey iPS cells that had been differentiated into dopaminergic neurons (the type of neuron that dies in Parkinson’s disease) and transplanted into the brain survived for months without forming tumours2. Researchers at RIKEN in Kobe, Japan, got similar results when transplanting iPS cells first coaxed into forming retinal pigment epithelial cells3, cells that support the photoreceptors at the back of the eye. Neither study observed tumours forming, and both found that transplants are not rejected when animals receive their own cells. However, both of the sites involved normally have a fairly weak capacity to trigger immune responses.

Dunbar, by contrast, differentiated iPS cells into bone precursor cells and placed them into small scaffolds just under the skin, a location with a robust immune response. The transplants did not cause irritation or inflammation, probably because the differentiated cells do not express embryonic proteins absent in mature tissues. By eight weeks, new bone had formed. Almost a year later no tumours had formed, and bone formation persisted.

More work is needed because evidence from other studies suggests that the bone precursor cells themselves may damp down the immune system, says Dunbar. She is hoping to repeat these studies using iPS cells that have been coaxed into making heart and liver cells.