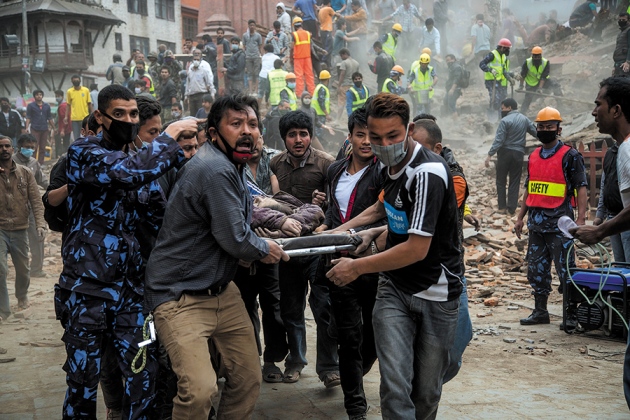 Rescue workers in Kathmandu, where a magnitude-7.8 earthquake killed 10,000 people in April 2015.

For a decade, seismologists have been able to generate fast, reliable estimates of the number of people likely to have been killed in an earthquake, to within a factor of two or three1. But these valuable tools are still not being used to save lives. Knowing whether 10 or 10,000 people might have died tells governments how much effort they should direct to rescuing people buried under rubble. Time is short — few individuals survive for more than three days.

Fatality predictions are sent by e-mail within half an hour of a harmful quake anywhere in the world, for free, by the International Centre for Earth Simulation (ICES) Foundation and the US Geological Survey (USGS). Yet most officials, first responders and journalists are unaware of this. Instead, decisions are based on information that trickles in from the scene. The death toll is generally underestimated. First accounts come from areas where communications networks still function — far from the epicentre. No information flows from the most devastated areas. Rescue efforts are too little, too late. Many people die needlessly.

I have seen this happen many times, as a seismologist who forecasts earthquake losses for ICES using its QLARM fatality-prediction model. On 24 February 2004, a magnitude-6.4 earthquake struck Morocco at 02:27 local time. Before dawn, the Swiss government offered to send help — its disaster-response team had received my alert indicating that up to 1,000 fatalities were likely. A Moroccan official turned them down.

As the Sun rose over the Alps outside my office, the Swiss responders reprimanded me for calculating nonsense and causing them to trouble important officials needlessly in the middle of the night: international television had reported only two dead.

Twenty hours later, Moroccan officials changed their minds and accepted Swiss help. In the end, 631 people died and thousands were injured. Similar events have been repeated since — in China, Nepal, Italy and elsewhere (see 'Rapid response').

Now that earthquake fatality forecasts have proved robust for ten years, I call on governments, earthquake responders and journalists to use them to improve their efforts to help victims. One big step costs nothing: the media should report the likely death toll from the outset. Acknowledging the scale of the disaster more quickly will render rescue efforts more effective.

Initial official and media reports regularly underestimate earthquake fatalities, even for relatively small, accessible events in developed countries. When the Italian town of L'Aquila was devastated by a magnitude-6.3 earthquake at 03:32 on 6 April 2009, for example, it was several hours before international media outlets (including CNN, Reuters and Bund) broadcast that there had been any deaths. After 16 hours, the BBC reported 108 dead. Yet within 22 minutes of the earthquake, my QLARM alert indicated that hundreds of people might have been killed. My estimate of 275 ± 250 fatalities was close to the final count of 309.

A similar story had unfolded almost a year before, on 12 May 2008, when a large area of western China was devastated by a magnitude-8 earthquake close to Wenchuan, near Chengdu. For the first few days, coverage by the state-owned China News Service mentioned no more than a few thousand people missing or dead. In the end, the toll was more than 87,000. Within 10 hours of the event, my model estimated between 20,000 and 90,000 fatalities.

It is impossible to say what might have been different had governments and response teams received earlier notification of the likely scale of these disasters. However, I believe that more-prompt actions would have been taken and lives saved. A year after the Wenchuan quake, one Chinese official told me that the government would have mobilized more soldiers and equipment had they known.

Large earthquakes often repeat in the same regions. Even if they don't hit during our generation, our children or grandchildren will be affected. Governments could run the calculations in advance and plan their approach. Most do not. For example, in March 2005, I published predictions of the probable death tolls for hypothetical great (magnitude-8) earthquakes in the Himalayas2. The fatality estimates were in the tens of thousands for each event. Again, sadly, they were on the mark3, 4.

Predictions of earthquake losses need to be reliable and independent. Some resource-strapped governments may not want to admit high tolls so that they can avoid the expense of making existing buildings resistant to earthquakes, which can cost hundreds of dollars per square metre. Yet each US$1 spent on earthquake mitigation saves $10 when the disaster strikes. Even small improvements can be effective, such as building 'earthquake closets' in homes (similar to tornado shelters), in which families can hide safely. Conversely, countries sometimes overstate the impacts of earthquakes to increase flows of aid and investment.

The main uncertainties in estimating losses are limited knowledge of local populations, building properties, soils and the nature of the earthquake itself.

The process works like this. As a fault ruptures, it sends out seismic waves, which are picked up by detectors. In developed nations, dense arrays of seismographs can gather enough data to pinpoint the epicentre and magnitude of the quake in seconds. For developing countries with sparser networks, international estimates of epicentres and magnitudes take minutes to acquire. These come from the GFZ German Research Centre for Geosciences in Potsdam; the US National Tsunami Warning Center in Alaska; the USGS in Colorado; and the European Mediterranean Seismological Centre in Paris.

It typically takes another 15 minutes to estimate human losses. For a harmful earthquake (with a magnitude higher than 5.5 or 6) the two main prediction systems — PAGER, run by the USGS, and QLARM5, run by ICES — distribute their assessments in median times of 25 and 28 minutes, respectively. First, algorithms calculate the intensity of shaking at the locations of settlements (about 2 million are included in QLARM's data set). Then they calculate damage to buildings, depending on the country affected and the size of the settlement. Finally, algorithms return the probabilities that occupants are killed, injured or survive unscathed.

“Each US$1 spent on earthquake mitigation saves $10 when the disaster strikes.”

Poor information on building stock is the main weakness. An apartment block will behave differently from an office building or factory. Despite global efforts to classify buildings by vulnerability (such as www.world-housing.net)6, most of the world's settlements are unmapped. The models use simplifications. For example, for most countries, QLARM assigns building models to three sizes of settlement: those with fewer than 2,000 inhabitants; places with more than 20,000 people; and those in between. That cannot account for different building qualities in specific cases — a small group of holiday homes, for instance, is built to a higher specification than is an old farming hamlet.

Building shaking can be augmented by the underlying soil and topography. Yet QLARM includes detailed soil and building data for only around 70 large cities (with populations in the millions). City districts need mapping to understand their seismic responses7. Making an informative model for a large city costs about $100,000. Geophysicist Danijel Schorlemmer at the GFZ centre is developing an app based on the open-source OpenStreetMap tool. This inexpensive system has begun to allow the public to record buildings in a way that earthquake engineers can use to classify construction types.

Poverty increases vulnerability to earthquake injury and damage. The fatality rate for rural communities is about 20% higher than for urban ones8. Yet for most developing countries, gathering data about seismic hazard is a low priority, even for those in the earthquake belt from Iran, Pakistan, India, Nepal and Myanmar to China. The common strategy is to do nothing and ask for help once a natural disaster strikes.

The populations of small towns and villages, especially in developing countries, must be approximated. For example, QLARM breaks down regional headcounts into published city and unpublished rural populations. The rural counts are assigned to villages with known names and coordinates, but without census numbers. Thus, average losses for a region are more reliable than those for a single village.

Other sources of uncertainty include the rapid pinning down of earthquake epicentres and magnitudes. If the epicentre is in a desert or ocean, few local fatalities can occur. But many earthquakes radiate energy along ruptures that are hundreds of kilometres long and can propagate close to cities. Once aftershocks outline the direction and extent of a rupture, more-accurate losses can be estimated. For example, my initial prediction of fatalities in the 2003 magnitude-6.7 earthquake in Bam, Iran, was 2,500 because the epicentre was at first thought to be in a remote location9. In reality, more than 26,000 perished.

For the most powerful earthquakes (magnitude 8 or more), first evaluations of magnitudes are often too small. For example, the Wenchuan earthquake was initially assessed as magnitude 7.5, implying 1,000 to 4,000 fatalities. After 100 minutes, colleagues called to tell me that it was closer to magnitude 8. I reran my code and increased the predicted toll to between 20,000 and 90,000.

Despite these limitations, the QLARM and PAGER crews have vast experience of using different approaches and data sets — 14.5 and 11 years, respectively. Although it is important to improve models and data10, it is time to apply these scientific advances on the ground.

I believe that a single action would have a radical impact. The media should report the estimated number of deaths. For example, journalists could state that: “Following an earthquake of magnitude M, two people have been reported dead in village X, 100 kilometres from the epicentre. However, experts predict there will be several hundred to a thousand fatalities.” The reporters could also call on loss-calculation experts to quickly assess the real scale of the disaster.

Mobilizing help more quickly in the aftermath of an earthquake will surely save lives.