A solar power plant on a former military air base in Finowfurt, Germany.

A new battery is rarely greeted with as much excitement as the latest smartphone or a new drug. The energy industry is widely perceived as sluggish, a provider of basic services and lacking creativity. In fact, a brighter reality is emerging — government support for energy-technology development is paying off.

Public policies to encourage the development and adoption of renewable-energy technologies are essential, because low-carbon performance is not visible to most consumers and carbon is not priced in the global market. Yet there is a widespread lack of confidence in public-sector efforts to spur innovation, as a result of the mixed record of governments in picking winners and losers among technologies1.

Some governments are considering reducing their support for renewable-energy projects. The future of the US tax credit for new wind energy is uncertain; the United Kingdom is debating scaling down subsidies for some renewables and relaxing its targets for carbon-emissions reductions, and Spain has abandoned its incentives programme and electricity-price commitments for renewable-energy power plants. The countries of the European Union disagree on a common binding target for the adoption of renewable energy by 2030.

But now is not the time to cut government support for renewables. Each day that we delay implementing low-carbon energy technologies we increase the likelihood of damage from climate change — from storms and floods to forest fires.

The response of the global energy industry to even modest policy interventions has been remarkable. Led by China, Europe, the United States and Japan, the alternative-energy sector is booming worldwide2–4. Solar and wind technologies have improved most rapidly in the past three decades, with photovoltaics a hundred times cheaper today than in 1975.

Governments should help to maintain this progress. Research funds and policies to boost markets will mature new energy industries and promote the next generation of low-carbon technologies.

The speed of energy-technology innovation is only just coming to light as long-term data sets become available. My analyses of 30 or more years of data2–4 show that the costs of renewable-energy technologies have fallen steeply. Photovoltaic module costs have plunged by about 10% per year over the past 30 years and the costs of wind turbines have fallen by roughly 5% per year. Production levels for both technologies have risen by about 30% per year on average.

The technical advances responsible have been driven by public policies and industry's responses to them. Governments spend a relatively modest amount on renewable-energy research, roughly US$5 billion per year globally, which is less than one-tenth the amount allocated to health research. But government incentives are essential for market growth; they drive private-sector investments in clean-energy technologies of about $250 billion per year globally.

Despite this success, lawmakers in many countries are questioning public support for clean energy. Some in the United States are urging that such support should be limited to funding basic research and development in universities and government labs. They cite the recent failure of a few prominent energy companies, such as Solyndra, which received government grants or loans in their early days. Critics forget that game-changing technologies are high-risk ventures; some failures are inevitable.

“Game-changing technologies are high-risk ventures; some failures are inevitable.”

Some technologies are more open to improvement than others2–7. Compact, modular systems, such as photovoltaics and electronics, are easily experimented on5, 7. And processes that may be achieved through alternative designs or materials offer more avenues for advancement. The diversity of semiconductors, for example, is behind the recent development of high-efficiency perovskite solar cells. Other technologies are harder to improve. Those with high commodity costs, such as coal-fired electricity6, soon hit cost floors in the marketplace.

Photovoltaic systems and wind turbines are therefore better candidates for sustained cost reduction than large nuclear or coal plants7. The lower price of solar cells today is due to increasing the efficiency with which sunlight is converted to electricity within modules, less manufacturing waste and greater economies of scale.

Knowledge about how to design, build and integrate these technologies into the energy infrastructure has also grown. For example, it takes roughly half the time to install a solar system in Germany compared with the United States, thanks to a more experienced workforce and streamlined permit processes8. 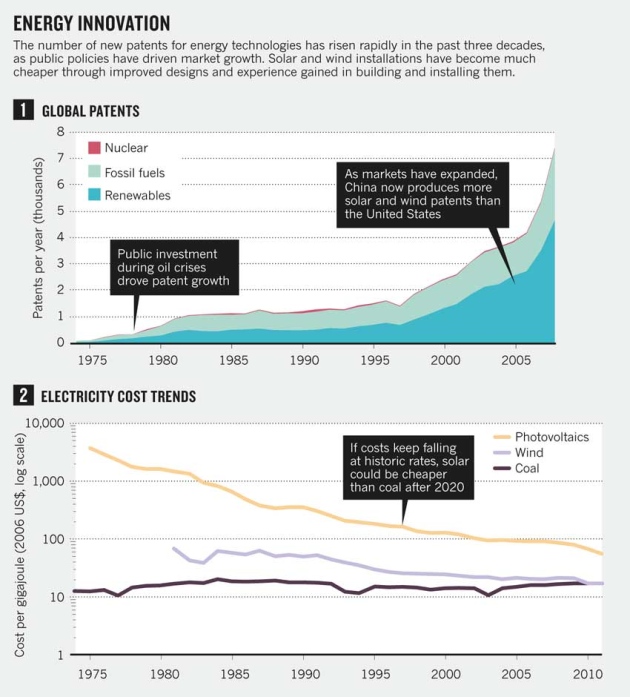 The recent growth in energy patents reflects the increasing knowledge generated in laboratories and on the manufacturing floor. The numbers of patents for solar and wind technologies have risen globally by about 15% and 20% per year on average, respectively, in the past decade2 — rates comparable with information technologies.

A link between public investment and patent filing is evident in historic records2. In the 1970s and early 1980s, patent numbers for solar and wind technologies rose by 20% and 15% per year on average globally as public money in Japan, the United States and Europe was pumped in to find alternatives to oil during the energy crises. When global energy-research funding dropped by 70% between 1980 and 1990, patenting rates levelled off, causing concern that the development of renewables would slow9.

Patenting rates remained flat for nearly two decades until the early 2000s, when they rose again2 (see 'Energy innovation'). This time the reason was rising investment from industry, in response to various government incentives and regulations.

Certain nations are now clear leaders in innovation. Japan dominates in terms of cumulative energy patents filed. But in the past ten years' growth has been driven by China and the United States, which together account for roughly 60% of renewables patents published globally per year and 60% of all energy patents. China has been the front runner in coal patents for 15 years and, in the past decade, has overtaken the United States in annual patent numbers for wind and solar as well. Europe has seen a tripling of renewables technologies patents in the past decade, whereas the region's patents related to fossil fuels have declined. 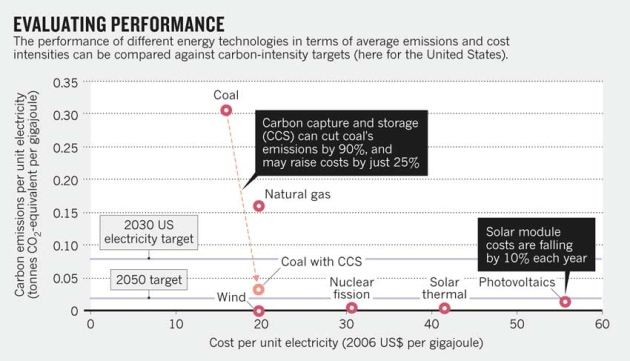 Underlying these cost and patenting trends is a diversity of national or regional policies10, including research funding, market incentives such as feed-in tariffs, subsidies and regulated adoption levels. China has set a target to supply 15% of energy for electricity production with renewables by 2020, and Germany plans to produce 35% of its electricity through renewables by 2020. In the United States, 29 states and the District of Columbia have adopted renewables portfolio standards that require specified installation levels of renewable energy.

Even with extreme energy-efficiency measures, developed countries will need to meet 75–100% of their power demand with carbon-free sources by 2050 (ref. 4), compared with 30% globally today, to hit emissions targets. The remainder could be produced with clean coal (with carbon capture and storage) and natural gas.

Sustained public policies and monitoring of technology performance are needed to support further progress in a variety of low-carbon technologies for electricity, transport and heating until they can support themselves. Wind and solar energy have delivered the greatest bang per buck so far, in terms of improvements in cost, patenting and market growth, and further developments should be supported. Because both types of power are intermittent, storage technologies should also be priorities for government investment.

The rapidly changing landscape of energy-technology patents and manufacturing costs, exemplified by the rise of China in these areas, cautions nations and corporations to build experience quickly in these fast-moving markets. Such momentum is evident in the highly efficient assembly lines now running at Yingli Solar's headquarters in Baoding, China, and in petrol stations in Sweden that offer drivers a choice of natural gas, biofuels, diesel and petrol. Students at my university are pitching clean-energy ideas to start-up investors with a sophistication that was rare even among experts ten years ago. 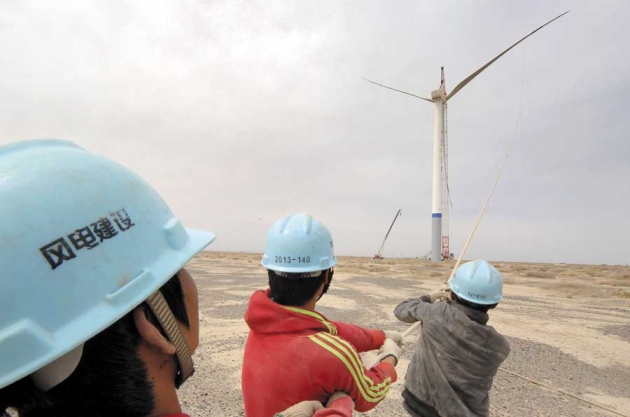 Wind power is on the rise in China.

Ways to measure progress towards low-carbon goals will be needed so that analysts and policy-makers can identify top-performing technologies and policies. Technological improvements can be quantified by the use of a 'cost-carbon curve' (see 'Evaluating performance'). In this way, the carbon (or water or land) intensity of technologies can be compared with their competitiveness, and evaluated against performance targets that depend on particular global or regional concerns such as emissions (or water consumption or land use)4.

Any major energy transformation will involve stumbles — from technologies that flop or companies that close to imperfect policy instruments, such as the teething troubles with the European emissions-trading scheme. Encouraging a diversity of innovations and monitoring progress will lessen these risks.

Governments should recognize the boom in energy-technology development and continue to support it. As history suggests, the resulting momentum could be enough to largely decarbonize the world's energy supply by mid-century.