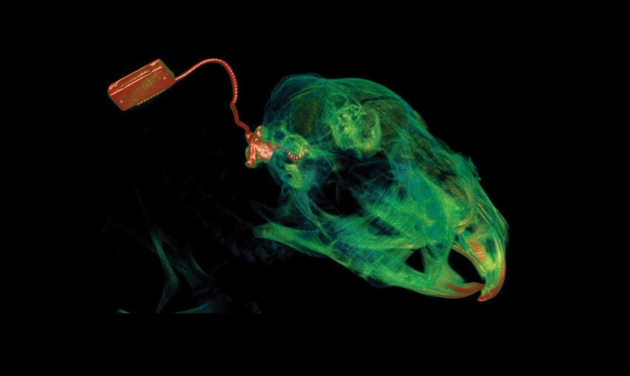 Sound travels from its source to ears, and eventually to the brain, through a chain of biological translations that convert air vibrations to nerve impulses. When hearing loss occurs, it’s usually because crucial links near the end of this chain — between the ear’s cochlear cells and the auditory nerve — are destroyed. Cochlear implants are designed to bridge this missing link in people with profound deafness by implanting an array of tiny electrodes that stimulate the auditory nerve.

Although cochlear implants often work well in quiet situations, people who have them still struggle to understand music or follow conversations amid background noise. After long-term hearing loss, the ends of the auditory nerve bundles are often frayed and withered, so the electrode array implanted in the cochlea must blast a broad, strong signal to try to make a connection, instead of stimulating a more precise array of neurons corresponding to particular frequencies. The result is an ‘aural smearing’ that obliterates fine resolution of sound, akin to forcing a piano player to wear snow mittens or a portrait artist to use finger paints.

To try to repair auditory nerve endings and help cochlear implants to send a sharper signal to the brain, researchers turned to gene therapy. Their method took advantage of the electrical impulses delivered by the cochlear-implant hardware, rather than viruses often used to carry genetic material, to temporarily turn inner-ear cells porous. This allowed DNA to slip in, says lead author Jeremy Pinyon, an auditory scientist at the University of New South Wales in Sydney, Australia. 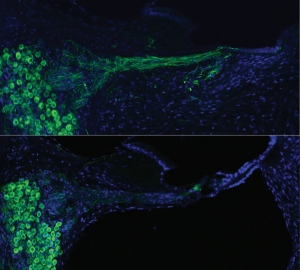 Pinyon and his colleagues were able to deliver a gene encoding neurotrophin, a protein that stimulates nerve growth, to the inner-ear cells of deaf guinea pigs. After injecting the cells with a solution of DNA, they sent a handful of 20-volt pulses through the cochlear-implant electrode arrays. The cells started producing neurotrophin, and the auditory nerve began to regenerate and reach out for the cochlea once again. The researchers found that the treated animals could use their implants with a sharper, more refined signal, although they did not compare the deaf guinea pigs to those with normal hearing. The work was partially funded by Cochlear, a cochlear-implant maker based in Sydney.

Regenerating nerves and cells in the inner ear to boost cochlear implant performance has long been a goal of auditory scientists. “This clever approach is the most promising to date,” says Gerald Loeb, a neural prosthetics researcher at the University of Southern California in Los Angeles, who helped to develop the original cochlear implant. Although clinical applications are still far in the future, the ability to deliver genes to specific areas in the cochlea will probably reduce regulatory obstacles, he says. But it is unclear why cochlear implants help some patients much more than others, so whether this gene therapy translates into actual clinical benefit is still unclear.

Listening to sounds is an intricate process, and a cochlear implant cannot simulate such complexity, says Edward Overstreet, an engineer at Oticon, a hearing technology company in Somerset, New Jersey. So it is not clear that simply sharpening the electrodes’ signal will help a user to hear sounds in a more natural way. “We would probably need a leap in cochlear-implant electrode array technology to make this meaningful in terms of patient outcomes,” he says.

If the method works well in humans, the authors say, it might help profoundly deaf people enjoy music and follow conversations in restaurants. And it might also enhance a newer type of hearing technology: hybrid electro-acoustic implants, which are designed to help people who have only partial hearing loss. The gene therapy might work to keep residual hearing intact and allow the implants to replace only what is missing, creating a blend of natural and electric hearing.