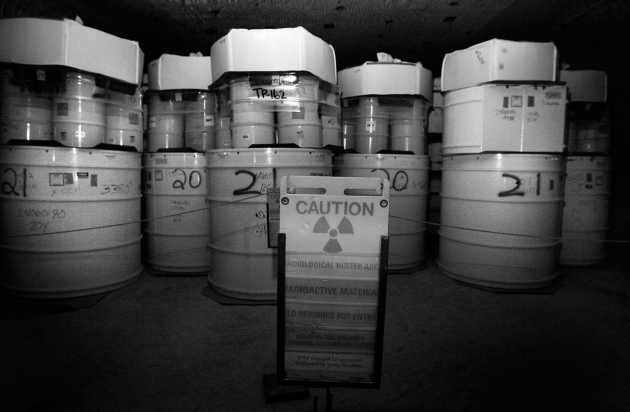 Reclassification of nuclear waste could make disposal simpler and cheaper.

The United States has a single deep geological repository for nuclear waste. Since 1999, the Waste Isolation Pilot Plant (WIPP), 655 metres down in a massive salt formation near Carlsbad, New Mexico, has received 12,000-odd shipments of what it calls transuranic waste. This is clothing, tools and other detritus from the nuclear-weapons programme that are contaminated by elements heavier than uranium. It’s more hazardous than low-level waste, which can be buried closer to the surface, but not as dangerous as high-level waste, for which a disposal site has yet to be found.

WIPP was closed for three years after radiation escaped from a ruptured drum in 2014. It was given the all-clear to reopen only in January; an enquiry determined that the drum had been packed improperly before shipment from the Los Alamos National Labora­tory in northern New Mexico. Concerns remain about safety, as well as the long-term risk of human intrusion into a facility that will remain dangerous for thousands of years after its eventual closure. But by and large, WIPP has functioned as designed, and it could do even more to help the US Department of Energy (DOE) address the fallout from the country’s nuclear-weapons programme.

Much high-level waste — produced during the reprocessing of spent nuclear fuel into plutonium — is highly radioactive and dangerous. But the evidence suggests that some of the waste that is labelled ‘high level’ technically qualifies as transuranic. This material is still barred from direct disposal at WIPP, purely because of how it was produced. But labels can be changed. If wastes that meet the transuranic criteria could be shipped to WIPP, it would save considerable time and effort as the DOE continues to struggle with the country’s radioactive legacy.

At present, the high-level waste is scheduled to be encased in glass logs for disposal in a separate repository at Yucca Mountain in Nevada. Despite decades of delays and controversies, there are signs of progress at the DOE’s flagship vitrification facility at the Hanford Site in Washington. But even if current plans hold, that facility will not begin processing high-level waste until 2032. Nor is it clear where the logs will actually go. Yucca Mountain was shut down by former president Barack Obama, only to be revived by President Donald Trump. Its long-term prospects are far from certain.

Reclassifying some high-level waste at Hanford, as well as at two facilities in Idaho and South Carolina, offers an alternative path for some of that waste, and one that would reduce an ongoing threat to workers and the environment. More than one-third of the 177 underground storage tanks at Hanford have leaked and contaminated groundwater.

The problem is inertia, compounded by fear, distrust and politics. The DOE is operating under a complex web of rules, regulations and legal agreements, and shifting course isn’t easy. Although the agency has the authority to look through its nuclear-waste inventory and reclassify wastes that meet the WIPP transuranic criteria, it has resisted such a move because it fears that this would spark political uproar — and quite probably legal challenges.

Washington state, which has in place a court-ordered clean-up agreement for Hanford, has been particularly resistant to change. And New Mexico has tied the DOE’s hands at WIPP by banning the disposal of tank wastes and any other materials managed as high-level waste — even if they meet the WIPP criteria. Watchdog groups, meanwhile, are concerned that nuclear-waste reclassification is simply a way of changing the rules and lowering the bar for public and environmental safety.

The proposal briefly bubbled up to the surface several years ago, but political attention shifted after the leak at WIPP. Now a coalition of local governments from communities across the nuclear-weapons industry is reviving the idea. In a white paper published last month, the Energy Communities Alliance urged a two-pronged approach involving the DOE as well as Congress, which could clarify the definition of high-level waste legislatively. The alliance estimated that the DOE could save at least US$40 billion over the lifetime of its clean-up programme — more than 15% of the estimated $257-billion price tag.

After spending some $11 billion on the as-yet-unfinished vitrification plant over the past two decades at Hanford, some may hesitate to change course. But as former DOE secretary Steven Chu said, the worst thing you can do in a multi-decade project such as nuclear-waste clean-up is to close the door to alternatives. In this case, the solution is simple enough: nuclear waste should be managed on the basis of the risk it poses and not the process that produced it.