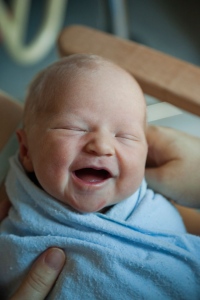 Babies with genetic disorders can have their whole genome screened for muations in just two days.

A faster DNA sequencing machine and streamlined analysis of the results can diagnose genetic disorders in days rather than weeks, as reported today in Science Translational Medicine1.

Up to a third of the babies admitted to neonatal intensive care units have a genetic disease. Although symptoms may be severe, the genetic cause can be hard to pin down. Thousands of genetic diseases have been described, but relatively few tests are available, and even these may detect only the most common mutations.

Whole-genome sequencing could test for many diseases at once, but its cost, the complexity of the results and the turnaround time are prohibitive. In what they hope will be a prototype for other hospitals, a research team led by Stephen Kingsmore at Children’s Mercy Hospital in Kansas City, Missouri, has implemented a much faster, simpler system for finding relevant mutations in whole-genome sequences that is designed for physicians without specialized genetic training.

These kinds of innovation will help more hospitals bring sequencing into clinical care, says Richard Gibbs, director of the human genome sequencing centre at Baylor College of Medicine in Houston, Texas. “A lot of people are going to realize from this that the future is now.”

Sequencing has been used before to pinpoint the cause of mysterious diseases. In 2011, Gibbs led a team that sequenced 14-year-old twins with a neurological movement disorder and found a way to improve their treatment2. In another instance, whole-genome sequencing suggested that a mysterious case of severe inflammatory bowel disease had a genetic cause and could be relieved through a bone marrow transplant3. But both these examples required several weeks and a team of experts to resolve. The Children’s Mercy Hospital plans to offer routine sequencing in the neonatal intensive care unit by the end of the year.

To order a test, physicians will choose terms from pull-down boxes to describe the infant's symptoms. Software then compiles a list of potential suspect genes. After the genome is sequenced, the software hunts for and analyses mutations in only those genes, which allows it to compile a list of possible causative mutations more quickly. The team had early access to a new DNA sequencing machine from sequencing company Illumina, based in San DIego, California, that could generate a whole genome within 25 hours. The entire process, from obtaining consent to preliminary diagnosis, took 50 hours, not counting the time taken to ship DNA samples and computer hard drives between Illumina's lab in the UK, where the DNA sequencing was carried out, and the hospital, where analysis was conducted. Kingsmore estimates that the cost of sequence and analysis is $13,500 per child, including costs to verify variants in a laboratory certified to perform clinical tests.

The research team used the new system to analyse the genomes of five children, including two brothers, with undiagnosed diseases and found definite or likely causative mutations in four of them. The researchers also sequenced portions of the parents’ genomes to track down which flagged mutations might cause disease. This exercise revealed that some mutations had arisen for the first time in the child. In other cases, recessive disease-causing variants had been inherited by both parents.

Though none of the diagnoses reported in the study affected treatment decisions, simply having a diagnosis can be a huge comfort, says Kingsmore. Physicians can stop doing costly and invasive tests. Families can get genetic counselling for planning future pregnancies. And new disease genes and mutations generate hypotheses for basic research.

For helping acutely sick children, time is of the essence, says Elizabeth Worthey, a genomicist at the Medical College of Wisconsin in Milwaukee, who uses sequencing to diagnose rare diseases in children3. Like the Children’s Mercy Hospital, the Children's Hospital of Wisconsin plans to start genome sequencing in the neonatal intensive care unit with the arrival of faster sequencing machines from Illumina and from Life Technologies in Carlsbad, California.

Worthey predicts that many institutions will work out information-sharing policies and technologies to bring sequencing to acutely sick babies. “All pretty big medical centres will be considering whether they can implement this within the next year," she says.

Fast sequencing cannot diagnose all genetic diseases, says Kingsmore. Current sequencing technology usually overlooks mutations such as duplicated genes, for example. Nonetheless, he predicts, sequencing will be able to provide diagnoses for many cases that would otherwise have remained harrowing mysteries.