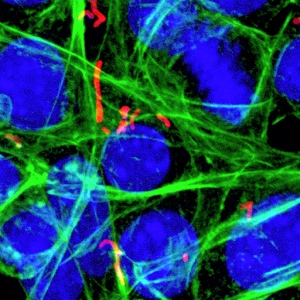 Two dangerous things together might make a medicine for one of the hardest cancers to treat. In a mouse model of pancreatic cancer, researchers have shown that bacteria can deliver deadly radiation to tumours — exploiting the immune suppression that normally makes the disease so intractable.

Fewer than one in 25 people diagnosed with pancreatic cancer are alive five years later. Chemotherapy, surgery and radiotherapy are generally ineffective, mainly because the disease has often spread to other organs even before it is detected.

The work, which is described in the Proceedings of the National Academy of Sciences1, began when Ekaterina Dadachova of the Albert Einstein College of Medicine in New York thought of combining two ways to fight cancer. She studies how radioactive isotopes can be used as anti-cancer weapons, and her colleague Claudia Gravekamp has been looking at whether weakened bacteria can be used to carry compounds that provoke a patient’s white blood cells into attacking the cancer. “I thought maybe we could combine the power of radiation with the power of live bacteria,” Dadachova says.

Sometimes found in food, the bacterium Listeria monocytogenes can cause severe infection, but is usually wiped out by the immune system. Exploiting the fact that cancer cells tend to suppress the immune reaction to avoid being destroyed, the two researchers and their collaborators decided to coat Listeria with radioactive antibodies and injected the bacterium into mice with pancreatic cancer that had spread to multiple sites. After several doses, the mice that had received the radioactive bacteria had 90% fewer metastases compared with mice that had received saline or radiation alone. “That was the first time we'd seen such a big effect,” says Gravekamp.

But Elizabeth Jaffee, an oncologist at Johns Hopkins University in Baltimore, Maryland, who has used non-radioactive Listeria in human trials for advanced cancers, including pancreatic cancer, says that some of the observations in the paper are hard to explain, particularly how weakened Listeria gets into metastases and why it's ineffective against the primary tumour.

Other researchers worry that healthy organs may receive excessive amounts of radiation. James Abbruzzese, an oncologist at the University of Texas MD Anderson Cancer Center in Houston, says that the levels of radiation reported in the liver and other organs were disturbingly high, and that he would have liked clearer data that the radiation is being delivered specifically to tumours.

Estimating dose levels between animals and humans is not always straightforward, but Dadachova counters that, according to her calculations, the radiation levels are below what is considered the safety threshold for humans, and that patients with pancreatic cancer tend to be less prone to radiation sickness because they have not usually received chemotherapy beforehand.

Joseph Herman, a radiation oncologist at Johns Hopkins, says that he would have liked to have seen results for other tumour types. And although the study found no signs of tissue damage one week after high-dose treatment of radioactive Listeria, Herman thinks that the effects of radiation might take longer to show up.

Still, Herman says, the approach might present an option where few exist. “The benefit is that it's a way of killing cancer cells in a cancer where therapy has not been very effective,” he says. “It's exciting, but it needs to be further validated.”