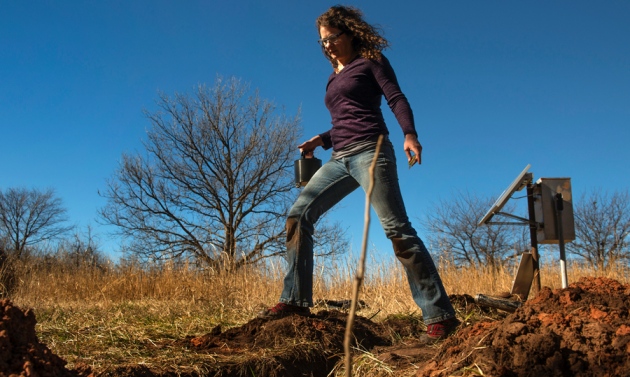 Seismologist Amberlee Darold is tracking unprecedented earthquakes in Oklahoma, and trying to discover what is causing them.

It’s the first thing that geologist Todd Halihan asks on a sunny spring afternoon at Oklahoma State University in Stillwater: “Did you feel the earthquake? My mother-in-law just called to complain that the house was shaking.”

Halihan’s mother-in-law has been calling a lot lately. Fifteen quakes of magnitude 4 or greater struck in 2014 — packing more than a century’s worth of normal seismic activity for the state into a single year. Oklahoma had twice as many earthquakes last year as California — a seismic hotspot — and researchers are racing to understand why before the next major one strikes.

Whatever they learn will apply to seismic hazards worldwide. Oklahoma’s quakes have been linked to underground wells where oil and gas operations dispose of waste water, but mining, geothermal energy and other underground explorations have triggered earthquakes from South Africa to Switzerland. This week, at a meeting of the Seismological Society of America in Pasadena, California, scientists will discuss how the risk from human-induced quakes differs from that of natural quakes — and how society can prepare for it.

In Oklahoma, the earthquakes have unleashed a frenzy of finger-pointing, with angry residents suing oil and gas companies over damage to their homes. The industry and politicians are locked in fierce debates about whether the quakes are induced, but the unprecedented shaking across central and northern parts of the state matches almost exactly with the activity of water-disposal wells. “There are some who will argue that it is purely natural,” says Halihan. “But by now it’s pretty clear it’s not.”

Companies drill into the ground to extract oil and gas mixed with salt water, essentially the brine from a long-fossilized sea. They separate out the fuels and then inject the salt water into deep disposal wells (there are more than 4,600 in Oklahoma). State regulations require that the salt water be disposed of in rock layers below those that hold drinking water (see ‘Shaky ground’).

Much of the liquid ends up in a rock formation called the Arbuckle, which underlies much of Oklahoma and is known for its ability to absorb huge volumes of water. But in many places the Arbuckle rests on brittle, ancient basement rocks, which can fracture along major faults under stress. “The deeper you inject, the more likely it is that the injected brine is going to make its way into a seismogenic fault zone, prone to producing earthquakes,” says Arthur McGarr, who leads research on induced quakes at the US Geological Survey (USGS) in Menlo Park, California.

Oil and gas companies operate disposal wells across the central United States, and although Oklahoma stands out for the sheer volume of waste water, other states may be getting triggered earthquakes. A report in Nature Communications1 this week, for example, links brine injection to a series of quakes that began in November 2013 near Azle, Texas.

The basic physics of the process has been understood since the 1970s, when scientists from the USGS pumped water down a well in Rangely, Colorado, and recorded how earthquake activity rose and petered out as they varied the amount of fluid2. The question now is which faults are likely to rupture in Oklahoma, and how large an earthquake they might produce.

Whether a fault breaks in an earthquake depends on how it sits in relation to the stresses that compress Earth’s crust. The movement of tectonic plates is squeezing Oklahoma from east to west, so most of the earthquakes are happening along faults oriented northwest to southeast, or northeast to southwest. Other faults are less likely to rupture, says McGarr. 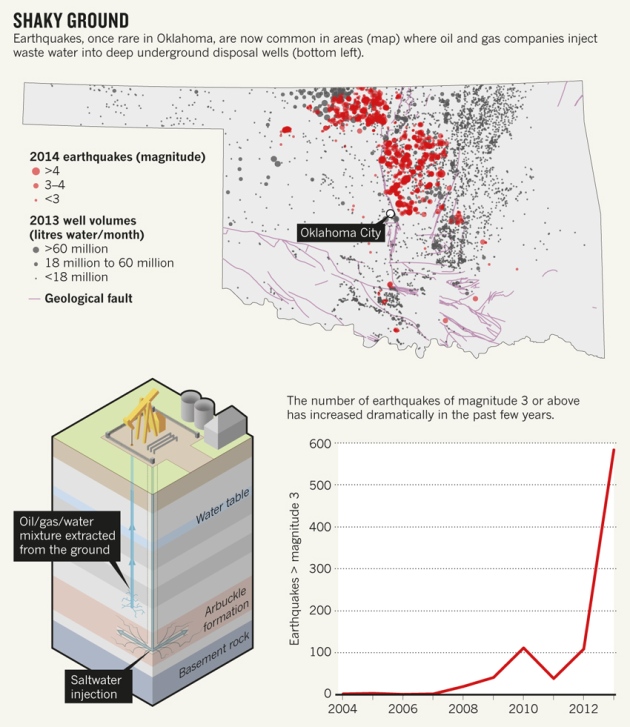 The biggest earthquake ever recorded in Oklahoma was a magnitude-5.6 event near the town of Prague in November 2011, and many seismologists think that it was induced by nearby disposal wells3. Theoretical work4 suggests that the potential size of a quake grows with the volume of fluid injected into the ground. The biggest disposal wells in Oklahoma inject more than 60 million litres of waste water each month.

Austin Holland, the state seismologist at the Oklahoma Geological Survey in Norman, estimates that the chance of another earthquake of magnitude 5 or greater striking the state in the next year is about 30%. “That is not the kind of lottery we want to win,” he says.

Oklahoma has designated buffer zones, requiring extra scrutiny for disposal wells within 10 kilometres of sites of earthquake swarms or quakes of magnitude 4 or greater. As of 18 April, operators must also prove they are not injecting into or near basement rocks, or must cut their disposal volumes by half.

Yet oil and gas companies hold great political power in Oklahoma, and regulators continue to emphasize what they call uncertainty in linking injection wells to quakes. “We felt a big quake one Friday night and I knew we had permitted a brand-new Arbuckle disposal well not three miles from my house,” said Tim Baker, director of the oil and gas division of the Oklahoma Corporation Commission, which regulates drilling, at a town-hall meeting in suburban Oklahoma City this month. “I drove to that well to inspect it on Saturday morning, and it wasn’t even turned on. That’s how complex this issue is.”

The related — and controversial — technique of hydraulic fracturing, in which water is injected into rock to open cracks so oil and gas can flow more easily, has also been linked to earthquakes, but to a much lesser extent. The fracking involves injecting less water for shorter periods of time, and has not been tied to any earthquakes greater than magnitude 4 (ref. 5).

One group of geologists wants to explore exactly how disposal wells might cause earthquakes. The team hopes to find a remote corner of Oklahoma and inject fluids deep underground while monitoring seismicity, in a modern analogue to the 1970s experiments in Colorado. “It’s a very ambitious goal, but we want to do a controlled field-scale experiment,” says Ze’ev Reches, a geophysicist at the University of Oklahoma in Norman and a co-leader of the project. But with Oklahomans already on edge, it is not clear whether the team could pull off such an experiment. So far, it remains hypothetical.

For now, seismologists are just trying to keep up with the quakes. The state geological survey recently gave up naming earthquake swarms, because the quakes simply never stopped, says Amberlee Darold, an agency seismologist. (The survey used to name swarms after nearby towns; it now identifies huge swathes of continuous activity by county.)

In the 15-storey brick Earth sciences building on the University of Oklahoma campus in Norman, statues celebrate the state’s ‘wild­catters’ who made it big in oil and gas, and a well-manicured garden nearby is dedicated to their achievements. Holland and Darold labour in the building’s dark basement, compiling a database of Oklahoma’s faults and trying to make sure that every earthquake is documented.

Many scientists are worried that the state’s buildings are not constructed to standards that consider seismic risk, and are concerned about how old brick-and-mortar structures would hold up in a large earthquake. The USGS issues national seismic-hazard maps every few years, but has never included the risk from induced quakes. This year, for the first time, the agency is developing induced-seismicity hazard maps for Oklahoma and surrounding states. The first of these is likely to be out by the end of 2015, says McGarr.

In Cushing, almost 60 kilometres north of Prague, crude-oil pipelines from across the continent meet. Fences topped with razor wire are meant to protect huge oil-storage tanks from a terrorist attack, but will not help if a major earthquake strikes, says Halihan.

In the meantime, he sits and waits to hear about the next quake. If he does not want to rely on his mother-in-law, Halihan can track the tremors by watching the movement of a small brass marker pinned to his office wall. It used to shake about once a week. Now it does so almost every day.