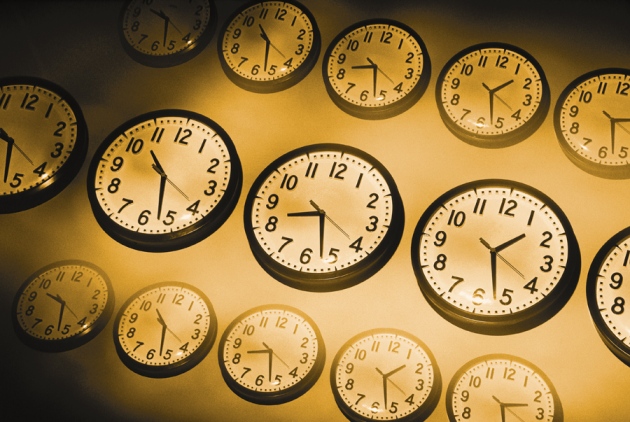 Keeping clocks synchronised across the globe is harder than it sounds.

By exploiting the tricks of quantum physics, researchers say they could build a worldwide network of atomic clocks that are much more accurate than any single clock in existence today.

This global hook-up would enable countries to synchronize timekeeping standards and improve space navigation. It could also aid the exploration of fundamental physics concepts, such as the long-sought gravitational waves thought to be rippling through space and time.

“We’re trying to be a little bit visionary,” says co-author Eric Kessler, a physicist at Harvard University in Cambridge, Massachusetts. “All the building blocks have been demonstrated in principle, and we want to show what might lie ahead if all these fields merge together.” Kessler and his colleagues, led by Mikhail Lukin of Harvard, describe the quantum superclock today in Nature Physics1.

The idea combines two popular research trends. The first is atomic clocks, which are becoming more precise as scientists improve ways of measuring superfast fluctuations in the energy states of charged particles or atoms. The second is quantum entanglement, in which pairs of particles become linked in such a way that measuring a property of one of them instantaneously determines the same property for the other. Lukin’s group wants to take a number of atomic clocks and entangle atoms from one clock to the next.

Imagine a set of ten satellites orbiting Earth, each carrying its own atomic clock, says Kessler. One satellite, as the network's centre, would start by preparing its clock particles in an entangled state. It would then communicate with a neighbouring satellite to extend the entanglement there. The linking would eventually spread through the whole fleet, joining the satellites in one quantum network.

Entanglement improves the precision of an atomic clock by reducing measurement noise (see 'Atomic clocks use quantum timekeeping'). So all of the clocks in a joined network perform better than each would alone, Kessler says. “The clocks behave as if they have a single giant pendulum, which has a better accuracy,” he says.

Sharing information also makes the clocks more stable. Individual clocks could send occasional updates to the central satellite, reporting how well or poorly they are keeping time. The network could then fine-tune its overall performance. “If you have more clocks in the network, it just makes it a better machine,” says Christopher Monroe, a physicist at the University of Maryland in College Park.

Better timekeeping would enable global financial markets to operate in near-perfect synchronicity. The clock network could also be used to improve the performance of Global Positioning System (GPS) satellites, which rely on accurate time standards to pinpoint locations on the ground. Other, more fundamental applications might include exploring the effects of the general theory of relativity, because the linked clocks would also serve as a common frequency reference that could be used to detect subtle shifts in space and time.

If it all sounds too good to be true, that is because the superclock is a long way from reality. Although certain parts of the clock network have been made in laboratories, much work remains to be done. As many as 14 atoms have been entangled at a time2, for instance, but the fidelity of that link is much less than would be needed for each clock in a network. The type of entanglement states that would be most useful for linked clocks have been generated only for fewer than 10 atoms, says Eugene Polzik, a physicist at the Niels Bohr Institute in Copenhagen. And no one has come close to demonstrating entanglement in space.

James Thompson, a physicist at JILA in Boulder, Colorado — a joint institute of the University of Colorado and the National Institute of Standards and Technology — says that the paper is important because it lays out ways in which quantum entanglement can improve scientists' ability to make measurements, such as in atomic clocks. “That's a big deal,” he says. “Everyone kind of assumes we'll be able to generate a lot of entanglement and observe it and do things with it, but that just hasn't really been the case.” Thompson has been working to improve quantum entanglement in the lab to make it more practical to work with.

“There’s no doubt this is a very futuristic proposal,” says Kessler. “We’ve got a long way to go.”