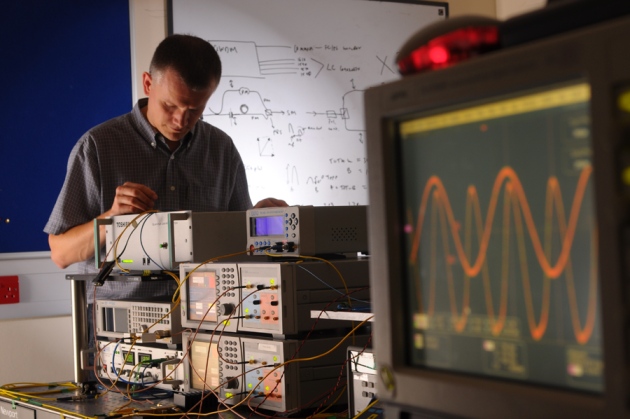 Cybersecurity is a step closer to the dream of sending data securely over long distances using quantum physics — spurred by two developments.

This week, China will start installing the world’s longest quantum-communications network, which includes a 2,000-kilometre link between Beijing and Shanghai. And a study jointly announced this week by the companies Toshiba, BT and ADVA, with the UK National Physical Laboratory in Teddington, reports “encouraging” results from a network field trial, suggesting that quantum communications could be feasible on existing fibre-optic infrastructure.

Conventional data-encryption systems rely on the exchange of a secret ‘key’ — in binary 0s and 1s — to encrypt and decrypt information. But the security of such a communication channel can be undermined if a hacker ‘eavesdrops’ on this key during transmission. Quantum communications use a technology called quantum key distribution (QKD), which harnesses the subatomic properties of photons to “remove this weakest link of the current system”, says Grégoire Ribordy, co-founder and chief executive of ID Quantique, a quantum-cryptography company in Geneva, Switzerland.

The method allows a user to send a pulse of photons that are placed in specific quantum states that characterize the cryptographic key. If anyone tries to intercept the key, the act of eavesdropping intrinsically alters its quantum state — alerting users to a security breach. Both the US$100-million Chinese initiative and the system tested in the latest study use QKD.

The Chinese network “will not only provide the highest level of protection for government and financial data, but provide a test bed for quantum theories and new technologies”, says Jian-Wei Pan, a quantum physicist at the University of Science and Technology of China in Hefei, who is leading the Chinese project.

Pan hopes to test such ideas using the network, along with a quantum satellite that his team plans to launch next year (see Nature 492, 22–25; 2012). Together, he says, the technologies could perform further tests of fundamental quantum theories over large scales (around 2,000 kilometres), such as quantum non-locality, in which changing the quantum state of one particle can influence the state of another even if they are far apart, says Pan.

Sending single photons over long distances is one of the greatest problems in QKD because they tend to get absorbed by optical fibres, making the keys tricky to detect on the receiver’s end.

This is “a big challenge for conventional detectors”, says Hoi-Kwong Lo, a quantum physicist at the University of Toronto in Canada. But technological breakthroughs in recent years have significantly reduced the noise level of detectors while increasing their efficiency in detecting photons from just 15% to 50%.

Vast improvements have also been made in the rate at which detectors can ‘count’ photon pulses — crucial in determining the rate at which quantum keys can be sent, and thus the speed of the network. Counting rates have been raised 1,000-fold, to about 2 gigahertz, says Lo.

The breakthroughs are pushing the distance over which quantum signals can be sent. Trials using ‘dark fibres’ — optical fibres laid down by telecommunications companies but lying unused — have sent quantum signals up to 100 kilometres, says Don Hayford, a researcher at Battelle, a technology-development company headquartered in Columbus, Ohio.

To go farther than that, quantum signals must be relayed at ‘node points’ — the quantum networks between Beijing and Shanghai, for instance, will require 32 nodes. To transmit photons over longer distances without the use of nodes would require a satellite.

China is not alone in its quantum-communication efforts. A team led by Hayford, together with ID Quantique, has started installing a 650-kilometre link between Battelle’s headquarters and its offices in Washington DC. The partnership is also planning a network linking major US cities, which could exceed 10,000 kilometres, says Hayford, although it has yet to secure funding for that.

The Chinese and US networks will both use dark fibres to send quantum keys. But these fibres “are not always available and can be prohibitively expensive”, says Andrew Shields, a quantum physicist at Toshiba Research Europe in Cambridge, UK. One way to sidestep the problem is to piggyback the photon streams onto the ‘lit’ fibres that transmit conventional telecommunications data. However, those conventional data streams are usually about a million times stronger than quantum streams, so the quantum data tend to be drowned out.

“The breakthroughs are pushing the distance over which quantum signals can be sent.”

In the results announced this week, Shields and his colleagues were successful in achieving the stable and secure transmission of QKDs along a live lit fibre between two stations of the UK telecommunications company BT, 26 kilometres apart. The quantum keys were sent over several weeks at a high rate alongside four channels of strong conventional data on the same fibre.

The research builds on previous work in which Shields and his team developed a technique to detect quantum signals sent alongside noisy data in a 90-kilometre fibre, but in controlled laboratory conditions (K. A. Patel et al. Phys. Rev. X 2, 041010; 2012).

“Implementing QKD in the ‘real world’ is much more challenging than in the controlled environment of the lab, due to environmental fluctuations and greater loss in the fibre,” says Shields.

The quantum keys in the latest study were sent alongside conventional data travelling at 40 gigabits per second. “As far as I am aware, this is the highest bandwidth of data that has been multiplexed with QKD to date,” add Shields.

He calculates that it would be possible to send QKD signals alongside 40 conventional data channels. Optical fibres usually carry between 40 and 160 telecommunications channels, meaning that quantum communication could be carried out with existing infrastructure.

“I find it an impressive piece of work that demonstrates the multiplexing of strong classical signals with quantum signals in the same fibre for the first time” in a field trial, says Lo. Removing the need for dark fibres, he says, is an important step in showing that QKD has the potential to be used in “real life”.