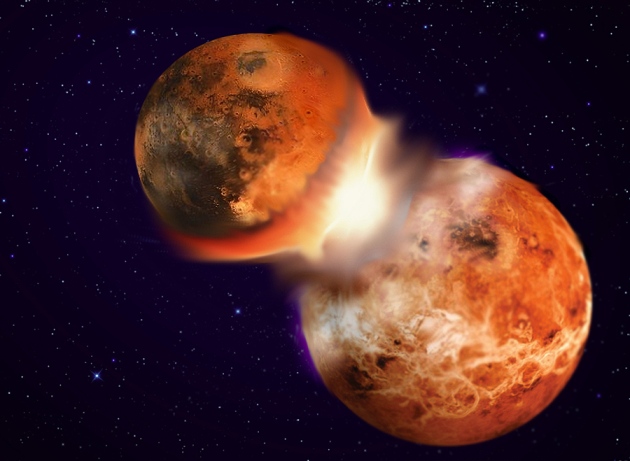 It now seems more probable that a collision between two planets of similar composition led to the formation of the Moon.

A nagging problem at the heart of the leading theory of how the Moon formed seems to have been explained away.

Reporter Adam Levy finds out how a new simulation reveals a hidden relationship between the Earth and the Moon.

The ‘giant impact’ hypothesis, first proposed in the 1970s, suggests that the Moon was formed from the debris scattered when a Mars-sized planet slammed into the early Earth some 4.5 billion years ago. This fits well with what we know about the Moon, including its mass and lack of any significant iron core.

But the theory also implies that the Moon is made up mostly of impactor material. Since lunar and Earth rocks have such similar compositions, this suggests that Earth and the planet that smacked into it resembled each other too. They would have needed to be sister planets, with a relationship much closer than that of any other planetary bodies we have studied in our Solar System. The odds of this being possible were thought to be around a 1% chance, or “uncomfortably rare”, according to Robin Canup, a planetary researcher at the Southwest Research Institute in Boulder, Colorado1.

Now it seems that the scenario is not so far-fetched, says Hagai Perets, an astrophysicist at the Israel Institute of Technology in Haifa. He and his colleagues performed simulations of the Solar System’s formation, to investigate how similar planets tend to be to their last giant impactor. They estimated that for 20% to 40% of collisions, the two bodies would be sufficiently similar to explain the Moon’s composition — considerably better odds. The findings are published in Nature2.

The planets would have closely resembled each other because of their similar distance from the Sun, meaning that they would have formed from the same kind of orbiting proto-planetary material. “The Earth and the Moon are not twins born from the same planet, but they are sisters in the sense that they grew up in the same environment,” says Perets.