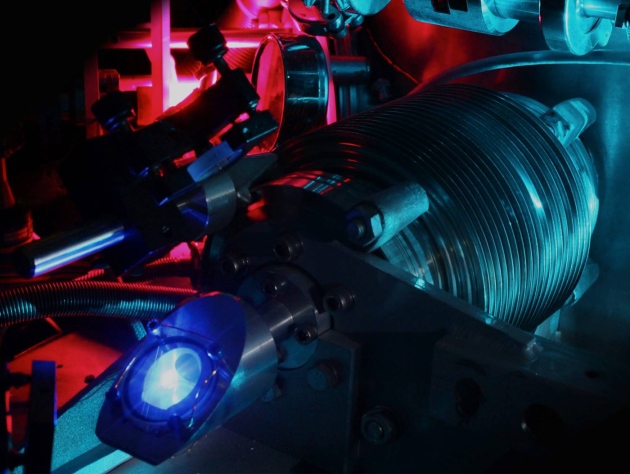 Researchers shone lasers at hydrogen atoms in a vacuum chamber to pinpoint the size of the protons inside.

The proton might truly be smaller than was thought. Experiments on an exotic form of hydrogen first found1 a puzzling discrepancy with the accepted size in 2010. Now, evidence from a German and Russian team points to a smaller value for the size of the proton with ordinary hydrogen, too.

The results, which appeared on 5 October in Science2, could be the first step towards resolving a puzzle that has made physicists doubt their most precise measurements, and even their most cherished theories.

Still, “before any resolution, this new value has to be confirmed”, says Jan Bernauer, a physicist at the Massachusetts Institute of Technology in Cambridge. If other labs confirm it, he adds, “then we can find why the old experiments were wrong, hopefully”.

For decades, physicists have estimated the size of the proton using one of two main techniques. Atomic physicists use spectroscopy to measure the energy levels of electrons orbiting an atomic nucleus — consisting of either the single proton in a hydrogen atom, or a bigger nucleus. The size of the nucleus affects those energies because electrons spend some time moving through the nucleus as they orbit it.

Meanwhile, nuclear physicists have used a similar technique to the one that enabled Ernest Rutherford to discover atomic nuclei in the first place. They hit the atoms with beams of fast-moving electrons and measure how the electrons bounce off.

As their precision improved, both methods roughly came to agree on a radius of about 0.8768 femtometres (millionths of a millionth of a millimetre).

But in 2010, a novel kind of experiment completed at the Paul Scherrer Institute in Villigen, Switzerland, disrupted the consensus. After a decade of unsuccessful attempts, a multinational collaboration led by Randolf Pohl, then at the Max Planck Institute of Quantum Optics (MPQ) in Garching, Germany, measured energy transitions not in ordinary hydrogen, but in lab-made ‘muonic’ hydrogen. These are atoms in which the electron has been replaced by a muon — a particle similar to an electron in most of its properties, but 200 times more massive. The heavier particle spends more time inside the nucleus, which means that the proton’s size has a much larger effect on the muon’s energies — which, in turn, should lead to a much more precise estimate of the proton’s radius.

Pohl’s team found the proton to be 4% smaller than the accepted value. Some researchers speculated that perhaps some previously unknown physics could make muons act differently than electrons. This would have required a revision of the standard model of particle physics, which predicts that muons and electrons should be identical in every way except for their masses — and might have pointed to the existence of yet-to-be-discovered elementary particles.

In the latest paper2, Pohl, now at the Johannes Gutenberg University in Mainz, Germany, and his collaborators tickled hydrogen atoms — containing ordinary electrons — with two different lasers. The first one sent the atoms’ electrons into an excited state, and the second one put them into a higher-energy excitation. The team then detected the photons that the atoms released as their electrons fell back into lower-energy excitation states.

The team combined its data with an earlier, high-precision measurement to calculate the Rydberg constant, which expresses the energy that it takes to rip the electron off the hydrogen atom. Standard theory then enabled the researchers to calculate the radius of the proton from this constant. The value they found was consistent with the muonic-hydrogen measurement, and 5% smaller than the 'official' proton radius.

To ensure that they eliminated any spurious experimental effects, the team spent three years analysing its data, says Lothar Maisenbacher, a co-author of the paper and an atomic physicist at the MPQ.

Bernauer, who works on the electron–proton scattering technique, is impressed. “It’s a great experiment,” he says. “I think they really advanced their field with this.”

The care that they took is “very impressive”, and makes their measurement more reliable than many others, says Krzysztof Pachucki, a theoretical physicist at the University of Warsaw who is on the task group of the Committee on Data for Science and Technology (CODATA).

CODATA, the international agency that publishes the best-known values of the fundamental constants, is taking notice of the Mainz experiment. “We will take this result very seriously,” says Pachucki. The committee is due to revise the ‘official’ handbook of universal constants of nature next year. Because of this experiment, CODATA will "most probably” change its values for the proton radius and Rydberg constant, he says.

But the German–Russian group is not quite ready to claim that the puzzle has been solved, Maisenbacher says. “We have not identified any conclusive reason why the other measurements should not be correct themselves,” he says. “We would like to see more experiments from other people.”

A number of teams around the world are doing just that. Bernauer is interested, for example, in the results of spectroscopy experiments being done at York University in Toronto, Canada. If their measurement is also small, “then I would start to believe that the old data has a problem”, Bernauer says. But that would still leave open the matter of the electron–proton scattering results.

In those experiments, researchers have conventionally used electrons that have a range of different energies. Estimating the size of the proton required extrapolating all the way to an ideal situation, in which electrons had zero energy.

Ashot Gasparian, a particle and nuclear physicist at North Carolina A&T State University in Greensboro and his team have recently conducted an experiment at the Thomas Jefferson National Accelerator Facility in Newport News, Virginia. They injected cold hydrogen gas directly into their electron accelerator, rather than bombarding liquid hydrogen kept in a plastic box, as was previously done. This technique enabled them to remove some experimental uncertainties and also to use electrons with lower energies than before. In principle, this could reveal whether and where the previous extrapolations went wrong. They are now analysing their data and hope to have results next year. “The ball is in our court,” says Gasparian.