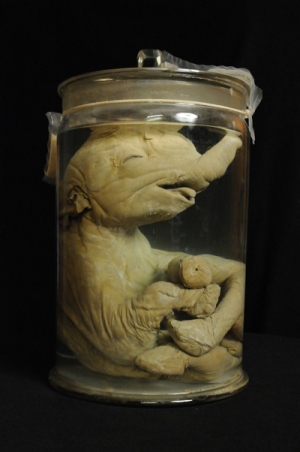 The fetus used by Carl Linnaeus as the type specimen of the Asian elephant.

A 300-year-old pickled fetus that was classified by Carl Linnaeus as the type specimen of the Asian elephant has been proved to be an African elephant — by the use of the emerging technology of ancient proteomics.

Evolutionary geneticist Tom Gilbert, whose University of Copenhagen lab owns one of the world’s most advanced DNA sequencing machines, had failed to identify the species from a DNA sample seven years ago because it was too degraded. To sidestep this problem, he and his colleague Enrico Cappellini decided to run an advanced protein analysis using a sample from the oesophagus of the fetus, held in the National Museum of Natural History in Stockholm. “Clearly it’s got protein, because the damn thing still exists,” Gilbert says.

The team sequenced several proteins in the specimen that were known to vary between elephant species, and each pointed to an African origin for the fetus (see go.nature.com/ivzyzm). Linnaeus assigned the elephant fetus as the type specimen of the Asian elephant (Elephas maximus), but zoologists had long suspected that it was in fact an African elephant (now called Loxodonta africana).

The work demonstrates the power of studying ancient proteins. Proteins are more resistant to degradation than DNA and could push the molecular fossil record back millions of years, as well as revealing biological insights that cannot be gleaned from genetic material alone, say scientists who study such remains.

Ancient protein analysis is not a new pursuit, says Matthew Collins, a biogeochemist at the University of York, UK. As long ago as 1954, amino acids were detected in trilobite and dinosaur fossils.

But the field took off in 2000, when Peggy Ostrom, a geochemist at Michigan State University in East Lansing, reported protein sequences from ancient bison and walrus bones up to 50,000 years old1. Her lab was the first to analyse ancient proteins using the technique of mass spectrometry, which ionizes peptide fragments and then measures their mass, enabling identification when compared with reference databases. Mass spectrometry revolutionized the field of proteomics, in which hundreds of proteins from a tissue are analysed at once, and made it possible to sequence fragmented ancient proteins.

Early efforts by Ostrom, Collins and others focused on individual proteins that are abundant in bone remains, such as collagen. “We call it the barcode of death,” says Collins, who uses collagen sequencing to quickly and cheaply identify species found at archaeological sites, such as the animals used to make parchment or the horns on Viking helmets. Collagen is also remarkably stable: it has been sequenced from a 3.5-million-year-old fossil of a giant camel from the Arctic2.

But collagen differs very little between closely related animal species, making it useless as a marker for evolutionary change. “You cannot tell an ibex from a domestic goat; you cannot tell a human from a Neanderthal,” Collins says. So Cappellini began developing methods to identify large numbers of different proteins in long-dead organisms. In 2012, his team identified 126 proteins from a 43,000-year-old woolly mammoth femur3. Earlier this year they sequenced 73 proteins from a 750,000-year-old horse fossil4. Both specimens also yielded DNA, but the protein data could reveal the additional information about which genes were expressed in bone tissue.

Like DNA sequencing, however, mass spectrometry of an ancient sample can yield an overwhelming amount of data, says Ostrom. “It can be daunting, you can get hundreds of sequences from just a single sample of a single protein, from one individual,” she says. And, like ancient DNA, ancient proteins suffer from contamination and chemical modification, although less is known about those processes with proteins, Ostrom says. Another drawback is that proteomics relies on databases of protein sequences to identify the proteins found. Such databases are lacking for most modern animals, let alone their ancient ancestors.

Researchers studying ancient proteins hope to do more than just sort out museum collections, although Gilbert and Cappellini are working on plenty of these. Ancient proteins can indicate which genes were active in particular tissues from old specimens. They can also reveal phylogenetic information from specimens in which the DNA is too degraded to analyse, such as ancient samples from warm climates, where DNA doesn’t last long, says Collins.

For instance, the evolutionary relationship between humans and Homo floresiensis, a short-statured human fossil from the Indonesian island of Flores, is unclear, and efforts to extract DNA have so far failed. Ancient proteins might finally place this ‘hobbit’ correctly on the human family tree.