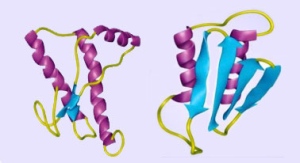 Prion proteins cause pathologies such as hamster scrapie when they misfold (right) — but the same protein has benign functions when folded correctly (left).

Prions are best known as the infectious agents that cause ‘mad cow’ disease and the human versions of it, such as variant Creutzfeldt–Jakob disease. But the proteins also have at least one known useful function, in the cells that insulate nerves, and are suspected to have more. Now researchers have provided the first direct evidence that the proteins play an important role in neurons themselves.

The team reports in the Journal of Neuroscience1 that prions are involved in developmental plasticity, the process by which the structure and function of neurons in the growing brain is shaped by experience.

Prions come in two main forms: the normal version and the misfolded, infectious version. The normal version, known as cellular prion protein (or PrPC), is present in every cell of the body and helps to maintain the myelin sheath in the cells that protect the nerves2.

But the molecule is abundant in neurons themselves, especially during development. Because it is tethered to the membrane, it is widely assumed to be involved in signalling between nerve cells, but little direct evidence has been found for this.

Neurobiologist Enrico Cherubini of the International School for Advanced Studies in Trieste, Italy, and his colleagues therefore decided to look at the effects of electrical stimulation on slices of tissue from the hippocampus of healthy 3–7-day-old mice and of animals genetically engineered to lack the gene that encodes the prion protein.

They used electrodes to stimulate individual cells at the same time as the networks of young neurons showed bursts of spontaneous electrical activity, or to simultaneously stimulate pairs of cells that are connected to each other.

In the tissue from healthy animals, both procedures strengthened the links between neurons, a phenomenon known as long-term potentiation.

In mice without the prion gene, however, the stimulation had the opposite effect. In these animals, the procedure induced long-term depression, or a weakening of neuronal connections.

“This shows that [the cellular prion protein] controls the direction of plasticity in the developing hippocampus,” says Cherubini, adding that he and his colleagues now want to identify the molecules that transfer the prion signal from the membrane into the cell.

Long-term potentiation in the hippocampus is thought to be crucial for learning and memory, but the importance of prions is still unknown, and Cherubini would like to investigate how the proteins are involved in behaviour. He also speculates that prions have a similar role in other parts of the developing brain, such as the visual cortex, and in adults.

"The function of cellular prion protein is quite mysterious, but this convincingly demonstrates that it has a crucial role in strengthening synaptic connections within developing neural networks," says R. Douglas Fields, chief of the Neural Development and Plasticity Section at the National Institute for Child Health and Development in Bethesda, Maryland.