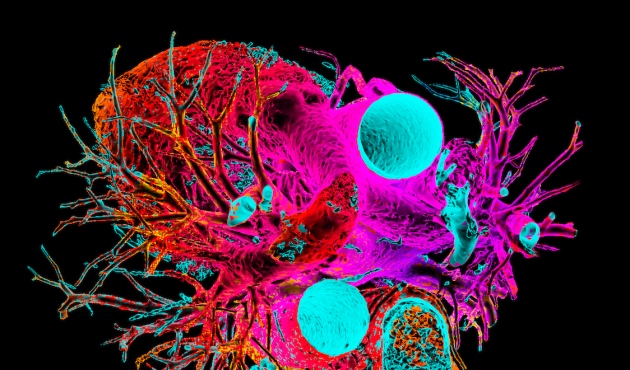 A tomography scan of a healthy heart.

A rare mutation found in Icelanders could be the basis for the next blockbuster heart drug. The genetic variant, reported on 18 May in the New England Journal of Medicine1 by scientists at a subsidiary of the biotechnology giant Amgen, lowers the risk of heart disease by more than one-third.

Amgen, headquartered in Thousand Oaks, California, has already made drugs that mimic the effects of the variation, says Kari Stefánsson, a geneticist at DeCODE Genetics (which was bought by Amgen in 2012) in Reykjavik. The variant inactivates a protein that recycles a class of sugar-coated proteins. But precisely which biomolecules it affects is not entirely clear, and the researchers do not yet know why it is associated with such a significantly-decreased risk of heart disease.

The DeCODE team identified the variation by comparing the genomes of thousands of Iceland's residents to their medical records. It has fully sequenced about 2,600 Icelanders, and inferred the sequences of another 398,000 inhabitants using more-limited genome data and family-tree records.

The company found that 1 in 120 Icelanders has a mutation that inactivates one copy of a gene called ASGR1, and that these people have much lower levels of non-high-density lipoprotein (non-HDL) cholesterol, compared to the rest of the population. A follow-up analysis of nearly 300,000 individuals from Iceland and 4 other countries found that carriers of this variant were 34% less likely to develop heart disease. The variant didn't seem to be linked to any adverse health effects.

The level of protection is comparable to that offered by a human gene variant discovered more than a decade ago that dramatically reduces cholesterol levels.The first drugs to mimic that mutation, which block a protein called PCSK9 that influences blood cholesterol levels, were approved by the US Food and Drug Administration last year. PCSK9 inhibitors have been touted as the next blockbusters in a cholesterol-lowering drug market that is worth tens of billions of dollars.

Anne Tybjærg-Hansen, a cardiologist at the University of Copenhagen, says that the new finding could provide a new drug target to prevent heart disease, but “we need to know more about how this works” — for instance, which proteins ASGR1 targets for breakdown. One possible explanation for its beneficial effects is that it reduces inflammation. “That is one of the things we are working on now,” Steffánson says. “It is very important to know what biology you’re manipulating."

Stefánsson contends that the ASGR1 variation reduces heart-disease risk more substantially than would be expected on the basis of its effect on cholesterol alone, which makes the finding potentially even more valuable. “This is a genetic discovery that is pointing to the possibility of manipulating something other than just blood lipids,” he says. “We have no drugs, really, that affect the risk of coronary heart disease that work on alternative mechanisms.”

Harlan Krumholz, a cardiology researcher at Yale University in New Haven, Connecticut, says that particular claim is speculative. “This study is far from identifying an alternative mechanism of risk reduction for a variant associated with non-HDL reduction,” he says.

Stefánsson expects discoveries from human genomes to have an ever-greater role in drug development — at least at Amgen. He says that the company now pursues drug targets only with strong genetic evidence in hand, and has killed “a bunch” of drug-development programmes on the basis of genome studies.