To catch a quake

DFDP-2 co-leader Rupert Sutherland explains how the Alpine Fault project near Whataroa could help scientists to observe a quake in action — for the first time ever.

For the first time, researchers are preparing to drop a battery of sensors deep into a seismic fault to record the build-up and occurrence of a massive earthquake.

An international team will drill a 1.3-kilometre hole in the Alpine Fault in New Zealand, through which they will gather crucial data that could help to predict future quakes. The fault ruptures roughly every 330 years, triggering a quake of up to magnitude 8 (K. R. Berry­man et al. Science 336, 1690–1693; 2012). The most recent earthquake was in 1717, so the next one is expected any time now.

“If we go on to record the next earthquake, then our experiment will be very, very special,” says Rupert Sutherland, a tectonic geologist at GNS Science, a government-run Earth-science organization in Lower Hutt, New Zealand, and one of the project’s leaders. “A complete record of events leading up to and during a large earthquake could provide a basis for earthquake forecasting in other geological faults.”

The Alpine Fault, which runs for about 600 kilometres along the west coast of South Island, marks the boundary between the Pacific and Australian plates (see ‘In the zone’). Every year, these plates slide past each other by about 2.5 centimetres, building up pressure. Geologists are confident that the fault is “ready to break in its next earthquake”, says Sutherland — with a 28% chance of a rupture in the coming 50 years. The Alpine Fault has been specifically selected for the drilling site because it is so late in this earthquake cycle.

In 2011, Sutherland’s team completed a test phase — the Deep Fault Drilling Project 1 (DFDP-1) — in which they sank two boreholes, the biggest reaching 151 metres into the fault. In the next two weeks, work is beginning on the DFDP-2, which will drill a hole 10 centi­metres across and 1.3 kilometres deep at the same site near the village of Whataroa. At that depth, the team will reach the ‘crush zone’ where the two plates meet, and will be able to take measurements representative of conditions deep in the crust, where earthquakes originate. 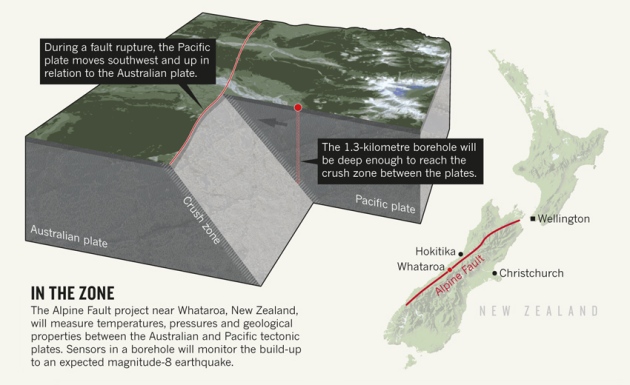 The DFDP-2 project will cost about US$2 million, and is being backed by the International Continental Scientific Drilling Program in Potsdam, Germany, and the Marsden Fund of the Royal Society of New Zealand in Wellington.

The first part of the experiment will involve collecting geological samples and inserting sensors into a shallow borehole to measure the temperature and pressure inside the fault. The hole will then be reinforced and deepened before instruments that are able to record key indicators of seismic activity — including images, sound, temperature and pressure — are lowered into the fault. The team hopes to complete all drilling and sensor-laying work at the borehole by early December.

Data collected by the sensors will be fed into computer simulations to test theories of how faults rupture, and will help the team to develop detailed models of how the fault behaves at different points in the earthquake cycle. One idea that will be tested is that large differences in groundwater pressures on either side of the fault zone could indicate whether a quake is imminent. 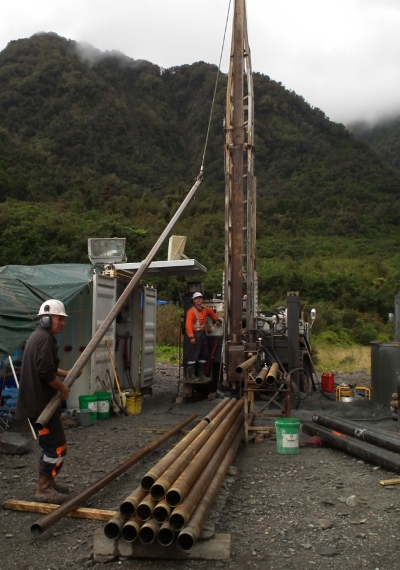 Researchers are set to drill a 1.3-kilometre borehole in a seismic fault near Whataroa, New Zealand.

“The fault appears to currently form an impermeable barrier, and it’s likely that time-dependent differences in groundwater pressure on either side of the fault play a role in governing earthquake nucleation processes and the radiation of seismic waves,” says John Townend, a seismologist at Victoria University of Wellington, who is part of the project.

The work will also help to improve understanding of plate-boundary mechanics and seismic hazards, says David Boon, a geologist at the British Geological Survey in Cardiff, who is not involved in the research. “This drilling will underpin the science of modelling stress build-up in the crust and, importantly, stress release — which can cause large destructive earthquakes, and secondary hazards such as tsunami, landslides and liquefaction”, in which soil behaves like liquid.

Researchers have used deep-drilling data for models before — but only in the aftermath of a quake. “To develop computer simulations for how earthquakes happen, information about initial conditions within the geological fault that is being ruptured is essential,” says Sutherland. “After our experiment, realistic data — based on observation — can be used to construct models, so they will have much more value.”

The only previous major attempt to peek inside an active fault is the San Andreas Fault Observatory at Depth (SAFOD), a 3.2-kilo­metre borehole near Parkfield, California. But this was done at a ‘creeping’ section of the fault, which experiences regular but small quakes rather than infrequent large ruptures.

Although not as deep as SAFOD, the DFDP-2 is calling on the US project’s experience, says Cliff Thurber, a seismologist at the University of Wisconsin–Madison and a participant in the DFDP-2. In particular, the team hopes to learn from SAFOD’s technical setbacks, which included instruments breaking because of the enormous heat and pressures deep underground. Thurber is also already thinking about a next borehole project, which he would like to see get even closer to an earthquake epicentre. “DFDP-2 is a great project, but my hope would be that there will be a DFDP-3 to reach deeper sometime soon,” he says.

This article originally gave the old name of the Institute of Geological and Nuclear Sciences — it is now called GNS Science. The text has been corrected to reflect this.