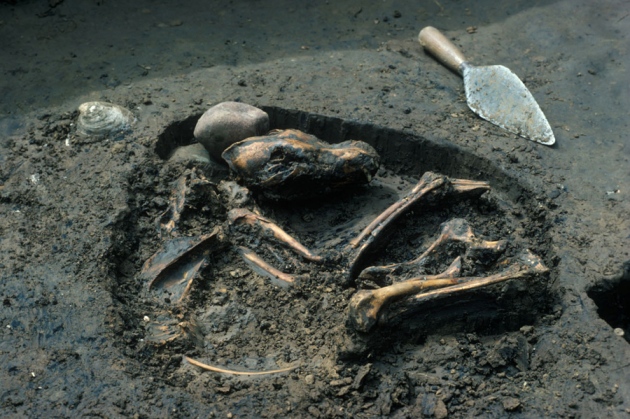 Geneticists have sequenced DNA from fossil specimens such as this one in Greene County, Illinois, to reconstruct a family tree of modern dogs and understand where they were first domesticated.

European hunter-gatherers domesticated dogs from wolves around 20,000 to 30,000 years ago, concludes an analysis of DNA from fossils. The study — the largest collection of ancient dog and wolf DNA sequences yet published — is the latest installment in a long-running debate over canine domestication.

Scientists have squabbled over the timing and location of dog domestication for decades. The earliest dog-like fossils found so far are from Europe and Siberia and date to more than 30,000 years ago. Different genetic analyses of modern dogs and wolves have suggested that domestic dogs emerged in Europe, China or the Middle East anywhere from 10,000 to more than 30,000 years ago1–3.

DNA from early dogs and wolves has the potential to clear up the confusion, says Olaf Thalmann, an evolutionary geneticist at the University of Turku in Finland. He and his colleague Robert Wayne at the University of California, Los Angeles, belong to one of several groups seeking clarity from ancient dog genomes.

Thalmann and Wayne’s team sequenced the complete genomes of mitochondria — energy-producing cellular organelles that are inherited maternally — from a total of 18 ancient dogs and wolves ranging from 1,000 to 36,000 years old. The team created a family tree from these data, as well as from genetic information of modern dogs and wolves from around the world.

The tree pointed to a European origin for the domestic dog, Thalmann says. Nearly all modern dogs — from Australian Dingoes to a breed of hunting dog originally from central Africa called Basenji — share a close kinship with ancient dogs or wolves from Europe. The common ancestor of domestic dogs lived in Europe 18,800–32,100 years ago, Thalmann’s team reports today in Science4.

However, two dog-like fossils, one from Belgium and one from Russia, were only distantly related to other ancient and modern dogs. At more than 30,000 years old, these bones represent the oldest dog-like fossils on record. Perhaps, Thalmann says, humans domesticated dogs from wolves multiple times, and these remains are the vestiges of ill-fated efforts.

Jean-Denis Vigne, an archaeo-zoologist at the National Museum of Natural History in Paris and CNRS, says it is possible that Europeans domesticated dogs more than once. But he adds that researchers still disagree over whether the Belgian and Russian fossils, which are much bigger than modern domestic canines, represent dogs or wolves.

Although Vigne has long contended, on the basis of the fossil evidence, that dogs emerged from Europe, he says the new study does not slam the door shut on other locales. The study did not look at ancient dogs from China or the Middle East.

Thalmann hopes to sequence samples from these areas, but believes the results would probably not alter the conclusion that domestication occurred in Europe. His team also hopes to examine DNA from the cell's nucleus in these and other fossils, which would yield much more information about ancestry than mitochondrial DNA. The researchers were unable to obtain enough quality nuclear DNA to be useful for the current study.

Greger Larson, an evolutionary geneticist at Durham University, UK, who studies animal domestication, says the new study stands out because it contains DNA sequences from a large number of ancient dogs and wolves, which “puts it on the path toward really figuring out the whole story of dog domestication”. With more ancient genomes coming, researchers studying dog domestication may soon have fewer bones to pick.