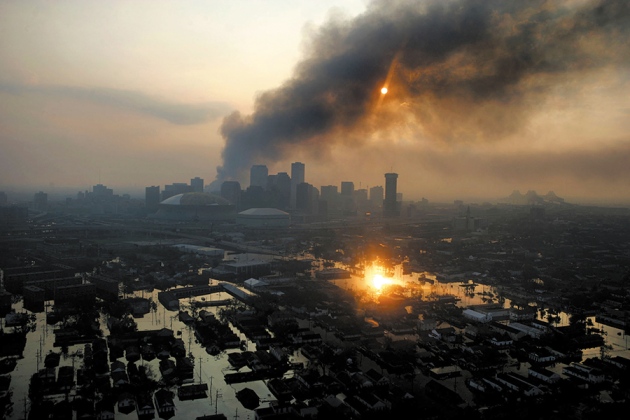 New Orleans flooded and burning, the week after Hurricane Katrina.

Ten years ago, Hurricane Katrina devastated the US Gulf coast states. It caused around US$110 billion in damages, more than 1,800 deaths, and displaced 1.2 million people1.

The disaster led to a rethink of the management of the Gulf coastline. In the seven decades preceding 2005, Louisiana had lost coastal lands, mainly marshes, totalling around 4,900 square kilometres — an area the size of Trinidad and Tobago2. Following the hurricane, the President's Gulf Coast Ecosystem Restoration Task Force recommended extensive wetland re-establishment, noting that they “provide a natural flood attenuation function”3.

After the hurricane season in 2005, the Louisiana state legislature created the Coastal Protection Restoration Authority (CPRA) and tasked it with coordinating the local, state and federal efforts. The CPRA embarked on five-year coastal master plans to guide policymakers in developing a more sustainable coast. I served on the science and engineering board that oversaw the scientific analysis for the 2012 master plan. This plan was charged with evaluating, prioritizing and integrating coastal protection and restoration projects over the next 50 years, with a total budget of $50 billion. The plan accounts for how coastal restoration and protection in Louisiana may have to adapt to differing climate-change and sea-level-rise scenarios.

The 2012 plan is not perfect. Oyster, shrimp and crab harvesters, landowners, waterfowl hunters and shipping interests have expressed concerns about river-diversion projects, delaying them. And the marsh-creation plans are ambitious: around 100 square kilometres of new wetlands from 2012 to 2031 (ref. 2). Combined with the building of levees and other structures, however, these efforts lower the damage costs associated with the risk of flooding along Louisiana's coast by $5.3 billion to $18 billion annually2.

Flaws and merits aside, Louisiana's 50-year coastal-planning strategy represents a new way of thinking about the long-term management of coasts. Resilience is the new aim — against short-lived natural disasters that have immediate and often extreme impacts, such as flooding and storm surges, and against long-term climatic changes that have more gradual impacts, such as sea-level rise, saline intrusion and erosion.

Other parts of the world urgently need such a long-term strategy. Around 38% of the global population — 2.5 billion people — live within 100 kilometres of the coast. More than three-quarters of these people are in developing countries. The frequency of flooding associated with cyclones and other major coastal storms is likely to increase by the 2050s as a result of accelerated sea-level rise4. Coastal areas are the front lines of climate change.

The most vulnerable are poor, rural populations in developing countries that live less than 10 metres above sea level, in low-elevation coastal zones (LECZs). In 2010, around 267 million people lived in the rural areas of LECZs. By 2100, the figure is projected to be 459 million (ref. 5).

Almost all of the world's 60 million poor people living in rural LECZs reside in just 15 countries: India, Bangladesh, Myanmar, Cambodia, Nigeria, Pakistan, Iraq, Mozambique, Senegal, Brazil, China, Indonesia, the Philippines, Vietnam and Thailand (see '15 most-at-risk nations'). Many of these people depend on agriculture and fishing, and rely on natural barriers such as mangroves for protection against storms and other coastal hazards that are set to intensify with climate change. Yet, as happened on the Gulf coast, these barriers are being eroded (see Supplementary Information).

These 15 nations should be the priority for a long-term global planning strategy to protect coasts and populations that are vulnerable to damaging storms. 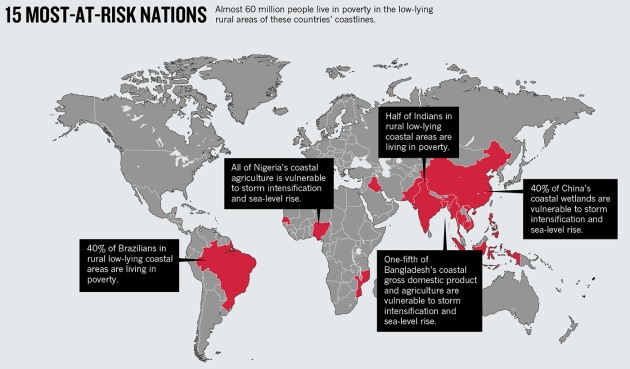 Consider Bangladesh. The current capacity, infrastructure and coping strategies of its coastal communities are inadequate to deal with current storms, let alone any of increased intensity. Over the next 35 years, the area of the coastline that is vulnerable to flooding of deeper than 3 metres could increase by more than 69%; the zones vulnerable to floods that are deeper than 1 metre could grow by 14%6.

A one-off investment of an estimated $2.4 billion is needed to cope with these hazards in Bangladesh from now until 2050, with extra maintenance and operating costs of $50 million per year. These sums are half the projected financial costs of future damages, deaths and injuries from the increased hazards associated with climate change6.

A long-term global resilience strategy for coasts needs three lines of defence. First is the restoration of 'green' infrastructure — robust coastal ecosystems, such as salt marshes, oyster and coral reefs, mangroves, seagrass beds and beaches. These are essential, especially in remote, rural parts of developing countries7, 8. Second is the right 'grey' infrastructure, such as seawalls, dikes, barrages and diversions as well as raising the elevation of buildings and flood-proofing structures. Third is to involve key local stakeholders throughout; this builds institutional and coastal community capability. 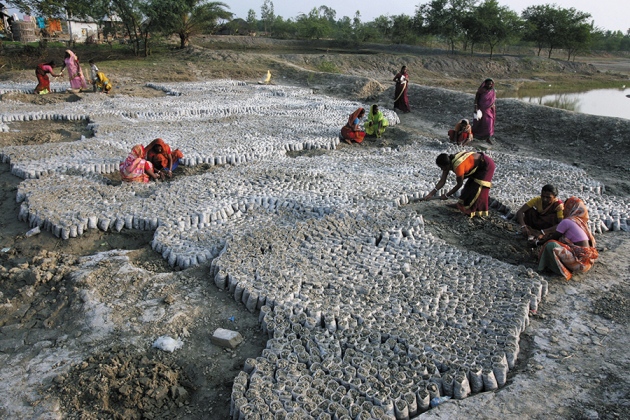 This third element — engagement, participation and empowerment — must not be overlooked. A good example of engagement is India's Joint Mangrove Management programme that, with the help of non-governmental organizations, enlists local communities in conservation and afforestation efforts7. Similarly, Louisiana's Coastal Master Plan was developed in consultation with state legislators, coastal parish officials, community groups, business leaders, advocacy organizations and Louisiana scientists. A series of public meetings attracted more than 750 people to comment on the plan; more than 2,200 comments came in online, by e-mail and by post2.

In the long term, community development will also need to include policies and investments that drive livelihood diversification — moving away from coastal resource-based activities such as fishing and agriculture towards manufacturing and services. And these communities need investments and improvements in health, education, local governance and institutions. As a first step towards determining which long-term investments should be a priority in Kenya, Madagascar, Mauritius, the Seychelles and Tanzania, for example, assessments have been conducted of coastal communities' vulnerability and adaptability to the main impacts of climate change on coral-reef fisheries9.

“The most vulnerable populations may need to be encouraged to migrate to non-coastal areas.”

Finally, the most vulnerable populations may need to be encouraged to migrate to non-coastal areas. Schemes such as voluntary property acquisition or assisted relocation may be required, as was recommended by the Louisiana master plan2. In Bangladesh and other developing countries, improving roads in remote, rural LECZs might be the best option to encourage voluntary migration from areas of high flood risk to safer areas with better employment opportunities6.

The 2012 Louisiana master plan has demonstrated that it is possible to put all three lines of coastal defence in place — green, grey and social. But it has done so in one of the richest nations in the world. Developing countries will clearly need international support to create and implement such plans. For instance, the Global Environment Facility and the United Nations Development Programme (UNDP) are already collaborating with the government of Bangladesh in support of its five-year, $8.5-million Community-based Adaptation to Climate Change through Coastal Afforestation programme8.

Such long-term planning efforts and capacity-building should be financed through international climate-change adaptation funds. This could be done on a cost-sharing basis with relevant governments and local jurisdictions in coastal zones. Currently, around $13.4 billion in the UN's Green Climate Fund as well as the main adaptation funds have been pledged to assist developing countries adapt to climate change. Just one quarter of that could make rural LECZs more resilient, and improve the livelihoods of nearly 60 million poor people currently living in these zones.

The next step should be for the COP21 UN climate summit in Paris this December to earmark multilateral adaptation funds to support developing countries in their efforts to devise a long-term global planning strategy for enhancing and protecting coasts and populations vulnerable to damaging storms. The World Bank, UNDP and the UN Environment Programme should also commit to assisting local and national authorities through a coordinated effort.