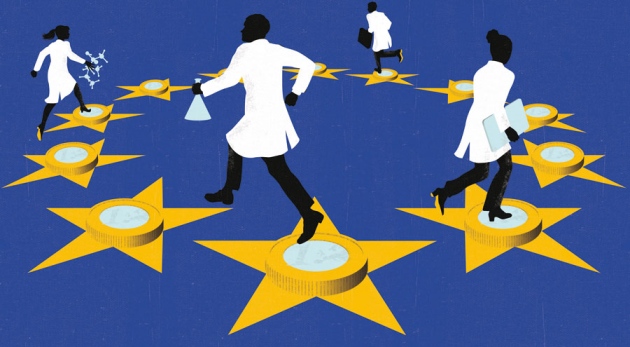 Building the European Research Area (ERA) has been the priority of Máire Geoghegan-Quinn since her appointment as the European Commissioner for Research, Innovation and Science in 2009. Her mandate stipulates that the ERA should “ensure the free circulation of researchers, knowledge, ideas and technology” across the European Union (EU; see go.nature.com/qdlyri) — like an academic equivalent of the European single market for goods and services. In March 2012, the European Council called for it to be completed by 2014 (see go.nature.com/meukwn). One focus, of particular relevance to the national funding agencies, has been on increasing researcher collaboration and mobility within Europe.

As president of Science Europe (representing 53 research-funding and -performing organizations from 27 countries) and chief executive of the UK Economic and Social Research Council (ESRC), I believe that the proposed timetable for implementing the ERA is worryingly short, particularly if changes to funding agencies and other institutional practices are necessary. I am also concerned that the changes may produce some undesirable, unintended consequences.

To agree on how much collaboration is optimal, we need to know how researchers collaborate and move within Europe. At Science Europe's request, such an analysis, produced by scientific publisher Elsevier's SciVal Analytics Team, will be released this week1. The report shows that internal European collaboration is not far behind that in the United States, but that connections with countries outside Europe need nurturing too. Researcher mobility between institutions in different European countries is also relatively low compared with movement between US states. To further the ERA vision, we should promote best practices for cross-border funding and minimize inequalities in salaries, pensions and benefits.

In Europe, most scientific research is supported by national agencies, rather than through European or international programmes. Different agencies take different approaches to collaboration. Some allocate resources across borders: the ESRC, for example, allows up to 30% of any grant to be spent on international collaborations. By contrast, many agencies restrict their spending to their home nations, and legislation to alter this requirement would be impossible to attain by 2014, even if they wished to do so.

Some organizations pay proportionately for researchers from their country in transnational projects. One approach is that collaborators submit a proposal to a single 'lead agency', which reviews the bid and takes the funding decision. Agencies from other countries recognize the decision and pay their share. Although this is efficient, negating the need for peer review in multiple nations, problems can arise. Committing high proportions of an agency's budget on the basis of decisions taken in another nation could lead to local funding panels feeling deprived of power. Lead-agency agreements work best when those involved have similar peer-review standards, success rates and views on research priorities. Agreements cannot be imposed on unwilling partners.

State of the union

Comparisons are often made with the greater level of partnership across US states (see go.nature.com/w87clf). But, unlike Europe, the US states are part of a federal system, with one language, consistent labour-market conditions and a single national funding system.

To provide a benchmark, Science Europe asked Elsevier to draw on publication data from their bibliographic database Scopus on the level of collaboration and mobility in Europe and the United States. The report1 will be launched in Brussels on 16 September. 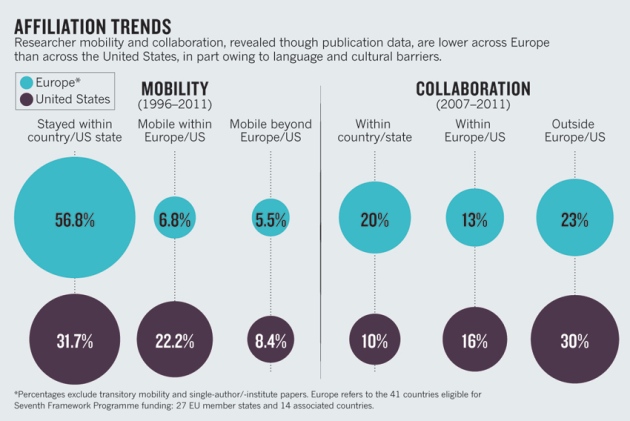 The analysis found that, in 2011, 13% of papers with a European primary author included co-authors from more than one country in Europe, compared with 16% of US primary-author papers that involved inter-state collaborations (see 'Affiliation trends'). This difference is small. But it is intercontinental collaborations — those that involve authors outside Europe or the United States, respectively — that tend to produce the most highly cited papers. So it is concerning that European scientists have fewer such partnerships (23% of joint papers) than their US counterparts (30%).

Relatively few academics seem to move between countries in Europe. The report finds that between 1996 and 2011, only 7% of researchers' affiliations switched between European countries, according to their addresses. In the United States, 22% of researchers published from institutions in more than one state in the same period. Barriers to movement across European borders might include language, benefits systems and cultural differences.

Although many funding agencies cannot legally allocate their resources to another nation, some have agreed a 'money follows researcher' policy, allowing researchers to transfer grants if they relocate within Europe. But even this simple scheme has challenges.

“Few academics seem to move between countries in Europe.”

Who owns the intellectual property from the grant-funded work when a researcher moves? Why would an academic move to a country where salaries or pensions are lower? How long would a national agency support such a policy if several researchers and their grants emigrated but few immigrated? And would the strongest researchers concentrate in the best-performing countries and institutions, perhaps increasing European excellence overall, but punishing nations that are still building their science portfolios?

Progress on various fronts is required2. First, regular monitoring of researcher collaborations and movements in Europe is needed. Funding agencies, universities and the EU should work together to collect different parts of this information.

Second, best practices, drawn from the various schemes, should be adopted across Europe. These should be administratively simple and avoid double peer review, where possible. Clarity is required on terminology — even words such as 'grant' or 'evaluation' can mean different things in different organizations — and on how funding mechanisms are implemented and communicated to researchers. Science Europe's working group on cross-border collaboration is now preparing such guidance.

Third, we need a forum that brings together research-funding and -performing organizations, the European Commission and ministerial representatives from member states. Science Europe has committed to hosting such a high-level ERA workshop annually.

Fourth, European funding agencies should not overemphasize European collaboration at the expense of global partnerships. Best-with-best partnerships should be encouraged, wherever they might be.

Fifth, research-funding and -performing organizations, through Science Europe, and universities must work with the European Commission to identify and solve barriers to mobility in the labour market, welfare and administrative systems. These include issues such as pensions portability, coordination of social-security systems and transparent recognition of educational qualifications.

The ERA should be an evolving, flexible and creative space in which researchers, ideas and knowledge circulate freely to respond to society's challenges. At its heart will be trust. The establishment of Science Europe is itself testament to the willingness of European research agencies to engage in shaping a better research landscape.