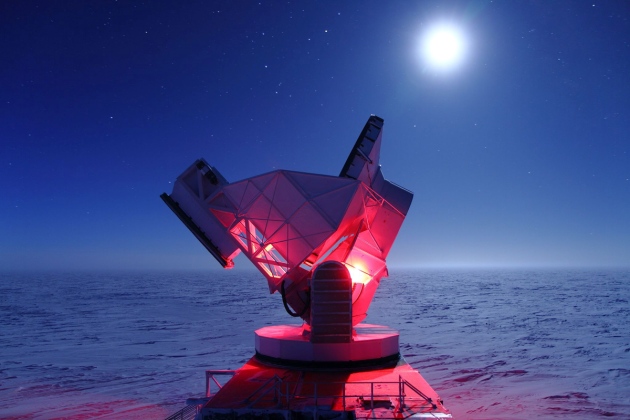 The South Pole Telescope has detected the first B-mode polarization signal in the cosmic microwave background.

Astronomers have detected a long-predicted polarization signal in the ripples of the Big Bang. The signal, known as B-mode polarization, is caused by the gravitational tug of matter on microwave photons left over from the Big Bang.

Its detection, posted this week to the arXiv preprint server1 and made by a microwave telescope at the South Pole, raises hopes that the signal can be used to map out the matter content of the Universe and determine the masses of the three types of neutrinos — in effect, using astronomy to achieve a key goal of particle physics. The detection also suggests that it might be possible to detect another type of B-mode, which would be evidence that the Universe, in the moment after the Big Bang, underwent a wrenching expansion known as inflation.

“The reason no one’s been able to see this before is that it is a very small signal — about 1 part in 10 million,” says Duncan Hanson, an astrophysicist at McGill University in Montreal, Canada, who led the work, which used ultrasensitive microwave receivers on the 10-metre South Pole Telescope (SPT). In comparison, the first measurements of ripples in the cosmic microwave background, released in 1992 by researchers using the NASA Cosmic Background Explorer satellite, was sensitive to differences of 4 parts in 100,000.

Other instruments are also seeking to detect B-modes, including the POLARBEAR experiment and the Atacama Cosmology Telescope (ACT), both in Chajnantor, Chile.

“They beat us, and hats off to them,” says Lyman Page, an astronomer at Princeton University in New Jersey and principal investigator for the ACT. “It’s intrinsically a neat signal and we all believe it will become an important tool for measuring the contents of the Universe.”

David Spergel, a theoretical astrophysicist also at Princeton, agrees. “It’s the first time polarization has been used to trace out large-scale structure in the Universe,” he says.

The SPT was switched on in 2007 and has used the cosmic microwave background to map out the positions of galaxies and star clusters. Its sensitive microwave receivers were installed in 2012 and were able to detect variations in the B-mode signal across very small scales on the sky, says John Carlstrom, an astrophysicist at the University of Chicago in Illinois and principal investigator of the SPT. To use the signal to pin down the masses of neutrinos, which make up an unknown proportion of the matter being mapped, astronomers will have to survey a patch of sky much larger than the 100 square degrees mapped by the SPT. Still, Carlstrom says it is not implausible that telescopes will determine the neutrino mass in the next few years, before planned particle-physics experiments attempt to do the same thing with beams of neutrinos on Earth.

Yet the ultimate goal of the microwave-polarization experiments is not to do particle physics but cosmology. They are chasing a different class of ‘primordial’ B-modes, which are thought to have been generated by the fast expansion of space during inflation. Any detection would be a definitive confirmation of inflation — one of the core theories of cosmology — and would fix its energy scale, which would be useful to physicists working to develop theories of quantum gravity. But primordial B-modes would exist as tiny variations on large scales of more than 1 degree across — too large for the SPT to find statistical significance with the relatively small patch of sky it surveyed. The European Space Agency's Planck satellite, which surveys the whole sky, might be able to make them out. It is also possible that they will be discernible in smaller data sets such as the SPT's once the gravitational B-modes have been mapped and removed, to potentially reveal any primordial signal beneath. The latest observation from the SPT suggests that this approach to detecting B-modes is a good prospect, says Spergel. “It’s a good sign that they’ve measured this from the ground.”