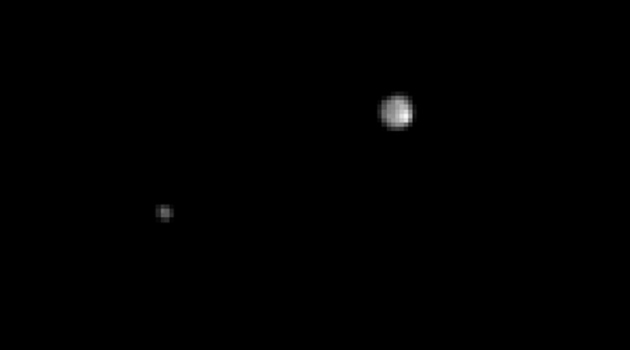 A bright spot on Pluto (right) could be nitrogen ice. The dwarf planet is shown with its largest moon, Charon.

Images from NASA’s New Horizons spacecraft suggest that Pluto has a polar cap made of some kind of ice.

The pictures, taken over the past few weeks and released on 29 April, show Pluto with its largest moon, Charon. The dwarf planet’s surface is mottled with light and dark patches, each measuring hundreds of kilometres across. But its pole remains bright no matter how Pluto rotates, suggesting that a highly reflective icy cap may exist there. “It’s very suspiciously suggestive,” says Alan Stern, the mission’s principal investigator, who is based at the Southwest Research Institute in Boulder, Colorado.

“It’s rare to see any planet in the Solar System at this low resolution displaying such strong surface markings,” he adds. “It’s a mystery whether these bright and dark regions are caused by geology or topography or composition.”

Light and dark patches have previously been spotted on Pluto by the Hubble Space Telescope. New Horizons, which is currently about 90 million kilometres from Pluto, is now taking higher-resolution images than Hubble did, but it is not as sensitive to faint objects. Image-processing techniques have allowed mission scientists to tease out surface details about a month earlier than expected, says project scientist Hal Weaver, of the Johns Hopkins University Applied Physics Laboratory in Laurel, Maryland.

Future measurements by New Horizons’ spectrometer will reveal what Pluto’s bright polar feature is made of. The dwarf planet’s surface is thought to contain a number of ices, including frozen nitrogen, carbon monoxide and methane. Some of these have probably vaporized off the surface to form a thin atmosphere.

The New Horizons mission is putting its raw images online within 48 hours of them arriving back on Earth. This is in stark contrast to the practice of the European Space Agency’s Rosetta team, which is releasing only limited pictures of comet 67P/Churyumov–Gerasimenko.