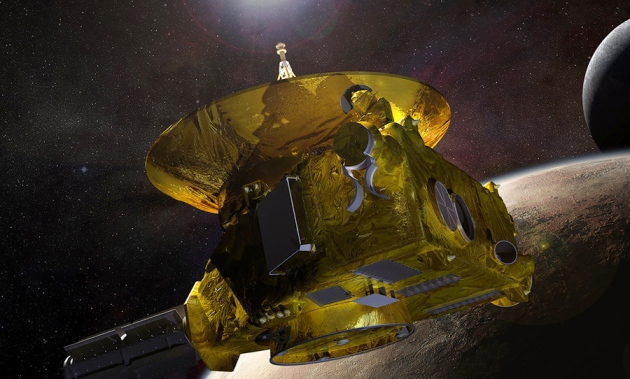 The New Horizons probe (artist’s impression) will be the first to visit Pluto and its moon Charon close up.

On 11 May, a telescope aboard a NASA craft will turn and stare at Pluto — like a space-robot equivalent of a sailor watching for shoals that could take out his vessel.

As the New Horizons craft hurtles towards its 14 July rendezvous with Pluto, mission scientists are preparing to guide it through what could be a dangerous dusty realm. It will skim the orbit of the dwarf planet’s largest moon, Charon, at more than 48,000 kilometres per hour. At that speed, hitting a dust particle the size of a rice grain could be fatal.

To minimize the risk of hitting debris from Charon or another, unknown moon, scientists will conduct seven 45-minute observation sessions between 11 May and 1 July. If they find a potential hazard, the team can change the spacecraft’s course. That would mean for­going some science observations, but it could also mean the difference between life and death for the first spacecraft ever to visit Pluto.

Mission leaders calculate that the chance of a dust particle knocking out New Horizons is just 1 in 10,000. The only way to avoid the hazard completely would be to stay away from Pluto altogether, says Marc Buie, a mission co-investigator at the Southwest Research Institute in Boulder, Colorado.

New Horizons, now roughly 90 million kilometres from Pluto, is giving humans their best-ever view of the dwarf planet. The spacecraft carries the Long Range Reconnaissance Imager, a giant zoom lens with a 20.8-centimetre aperture. During the hazard observations, the instrument will scan the space around Pluto and its five known moons, looking for objects as small as a few kilometres across.

The mission is almost certain to discover new moons in the process. The Hubble Space Telescope found two during its hazard searches before the Pluto mission: Kerberos, which measures 14–40 kilometres across, in 2011, and the smaller Styx in 2012. “I wouldn’t be at all surprised if there were more,” says Cathy Olkin, a New Horizons deputy project scientist at the Southwest Research Institute.

Charon, which is roughly the same width as Texas, is thought to have formed during a giant impact early in Pluto’s history. The other four known moons are much smaller and may be debris spit out during the same collision. “The architectural details of this system are fascinating,” says William McKinnon, a planetary scientist at Washington University in St. Louis, Missouri. “It’s like a miniature planetary system.”

New-found moons might appear in any of a number of places around Pluto, says Buie. There is, for example, a pocket that nestles inside the orbit of Charon that is gravitationally stable enough for a moon to survive there for millions of years. But planetary scientists do not have a plausible explanation for how a moon might have appeared there to begin with, Buie says. 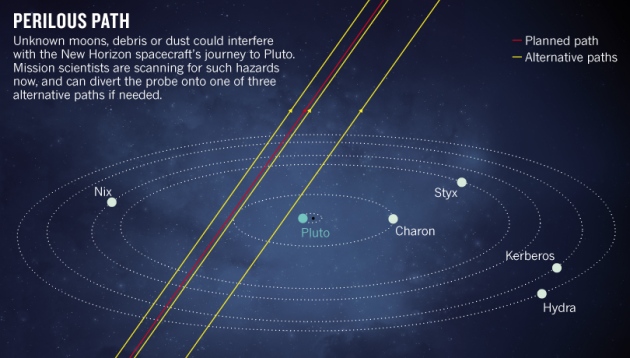 Another place that could have small moons is outside the orbit of Hydra, Pluto’s outermost known moon. Buie hopes to find an exotic arrangement: moons sharing the same orbit. Any such discovery would rewrite the origin story of the Pluto–Charon system, he says.

As New Horizons gets closer to Pluto, it may even spot rings of dust around the dwarf planet. These could form when meteorites hit the small moons, kicking up dust that drifts away from the moons’ low-gravity environments and into orbit around Pluto.

It is this streaming dust that poses the biggest danger to New Horizons. Mission scientists have been modelling where they think the dust from Pluto’s moons might flow, and will do so again after the upcoming hazard searches.

If mission planners do spot something dangerous, they can divert New Horizons onto one of three alternative routes (see ‘Perilous path’). One option would leave the spacecraft on its current course but rotate it so that its antenna acts as a shield against incoming debris. Another possibility would send the craft diving much closer to Pluto, inside the orbit of Charon — assuming that there is no extra moon there. A third would nudge the spacecraft slightly farther away from Pluto.

The last chance to divert to one of these courses comes on 4 July. Choosing any of them would burn some of the fuel that engineers need to steer the spacecraft when it departs Pluto for a planned visit to a second icy world in the outer Solar System’s Kuiper belt.

Even so, mission planners have a backup for this backup. They will command New Horizons to radio a little of its crucial data back to Earth in the two days before its Pluto encounter — just in case something takes the spacecraft out.

The graphic in this story originally put Nix on the wrong orbital path. The image has now been corrected.