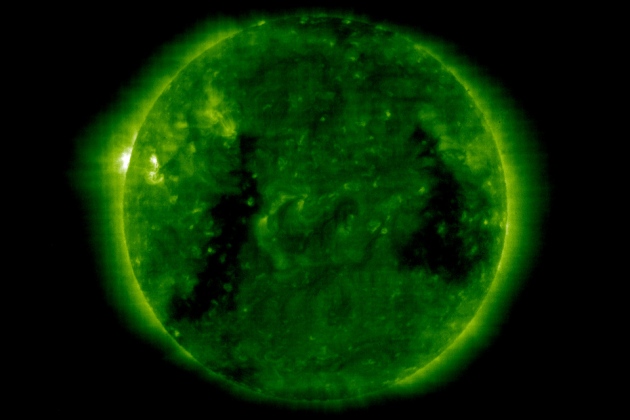 The Sun's ghostly glow highlights spots in its atmosphere where material simmers at 1.5 million kelvin.

Rossby waves were  discovered in Earth’s atmosphere in the late 1930s. Driven by a planet's rotation, they’ve been seen in the atmospheres of other planets, as well as in Earth’s oceans. In theory, these waves can form in any rotating fluid, says Scott McIntosh, a solar physicist at the National Center for Atmospheric Research in Boulder, Colorado and lead study author.

Researchers have long sought evidence of Rossby waves on the Sun, he says. And an enhanced understanding of these features and their movements could help scientists to better predict the formation of sunspots and the eruption of solar flares.

Staring at the Sun

In the past, astronomers have been hampered in their search for the waves by their limited view of the Sun, because only one side can be viewed from Earth. But three solar probes — part of NASA's Solar Dynamics Observatory and its Solar Terrestrial Relations Observatory (STEREO) mission — were positioned for several years to give scientists a 360° view of the Sun’s atmosphere, or corona. (Astronomers lost communication with one STEREO probe after it slid behind the Sun in mid-2014.)

The team concentrated on patterns of hot, bright features called brightpoints that pepper the Sun’s corona and can be used to track the roiling motions of material deeper in the solar atmosphere, says McIntosh. Using data gathered by the probes from June 2010 to May 2013, researchers identified well-defined brightpoint clusters that moved westward, on average, at a speed of about 3.25 metres per second in the Sun’s northern hemisphere and at about 2.65 m s–1 in its southern hemisphere.

The brightpoint clusters moved westward faster than underlying portions of the solar atmosphere, which is a hallmark of Rossby waves, McIntosh notes.

The researchers have named the patterns 'Rossby-like waves' because they relate to magnetic activity of the Sun's plasma, not just fluid motion. “It’s no real surprise that we’ve found them on the Sun,” says McIntosh. “It’s just that recently, for the first time in human history, we’ve been able to see the entire surface of the Sun at once,” not just the side facing Earth — thanks to the positioning of the solar probes.

The team’s findings are the first strong evidence for Rossby waves on the Sun, says Mihalis Mathioudakis, an astrophysicist at Queen’s University Belfast, UK.

“This is a neat result, if these features are indeed Rossby waves,” says Joseph Gurman, an astrophysicist at NASA’s Goddard Space Flight Center in Greenbelt, Maryland. The full view of the Sun’s surface at all latitudes and longitudes “has provided a unique opportunity to discover things we hadn’t seen before”.

Brightpoints are linked to increased magnetic activity, so a better understanding of their formation, evolution and movement might help researchers to fine-tune models of solar activity, says McIntosh. That, in turn, could lead to better predictions of benign solar processes such as the development of sunspots. But it could also help predict the onset of potentially devastating solar storms — massive eruptions of highly charged particles, called coronal mass ejections (CMEs), into space. If particularly strong CMEs strike Earth, they can cripple communications satellites and knock out power grids across wide regions. Some studies suggest that the cost of these 'space weather' hazards could be around US$10 billion per year.

“If researchers can identify active regions on the Sun and have some confidence in how they would evolve, then that could give people some warning,” says Todd Hoeksema, a solar physicist at Stanford University in California.

But predicting space weather “may not be quite as straightforward as it is on Earth”, says Richard Morton, a solar physicist at Northumbria University in Newcastle-upon-Tyne, UK. The complex interaction of strong magnetic fields and fluid flow in the Sun's atmosphere might mean that long-term solar activity trends are easier to predict than are short-term developments, such as where a solar flare might occur on a given day.

Nevertheless, McIntosh and his team hold out hope. Monitoring the Sun’s weather patterns and understanding their origins are vital to boosting the accuracy of space weather predictions to protect our technological society, they say.