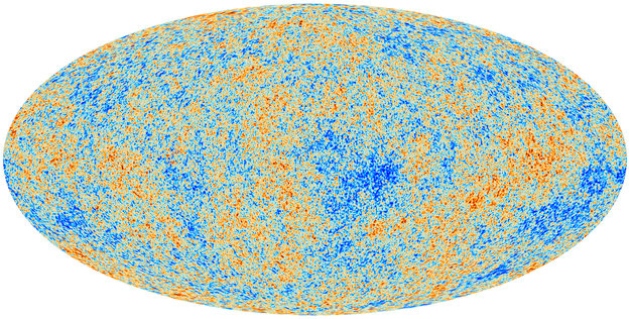 The Planck space telescope's view of the cosmic background radiation is helping to reveal details about the birth of the Universe.

The Planck space telescope has delivered the most detailed picture yet of the cosmic microwave background, the residual glow of the Big Bang.

Unveiling the results from the €700-million (US$904-million) European Space Agency (ESA) probe, scientists say that the images shed fresh light on the first instants of the Universe’s birth and peg the age of the Universe at 13.82 billion years — slightly older than previously estimated.

“For cosmologists, this map is a gold mine of information,” says George Efstathiou, director of the Kavli Institute for Cosmology at the University of Cambridge, UK, and one of Planck’s lead researchers.

The results strongly support the idea that in the 10−32 seconds or so after the Big Bang, the Universe expanded at a staggering rate — a process dubbed inflation.

Inflation would explain why the Universe is so big, and why we cannot detect any curvature in the fabric of space (other than the tiny indentations caused by massive objects such as black holes). The sudden ballooning also amplified quantum fluctuations into clumps of matter that went on to seed the first stars, and, eventually, the straggly superclusters of galaxies that now span hundreds of millions of parsecs.

The cosmic microwave background radiation studied by Planck dates from about 380,000 years after the Big Bang, by which time the Universe had cooled to a few thousand degrees and neutral atoms of hydrogen and helium were beginning to form from the seething mass of charged plasma. That transition allowed photons to travel unimpeded through space, in a pattern that carried the echoes of inflation. Those photons are still out there today, as a dim glow of microwaves with a temperature of just 2.7 kelvin.

Since the cosmic microwave background was first detected in 1964, two space-based experiments — the Cosmic Background Explorer (COBE) and the Wilkinson Microwave Anisotropy Probe (WMAP) — have mapped the tiny temperature variations within it. Those data have enabled cosmologists to work out when the Big Bang happened, estimate the amount of unseen dark matter in the cosmos and measure the ‘dark energy’ that is accelerating the expansion of the Universe.

Planck, launched in 2009, is more than three times more sensitive than the WMAP. Its high-frequency microwave detector is cooled to just 0.1 degrees above absolute zero, which enables it to detect temperature variations as small as a millionth of a degree.

The Planck data also implies that dark energy makes up 68.3% of the energy density of the Universe, a slightly smaller proportion than estimated from WMAP data. The contribution of dark matter swells from 22.7% to 26.8%, leaving normal matter making up just under 5%.

Planck also confirmed some oddities earlier picked up by the WMAP. The simplest models of inflation predict that fluctuations in the cosmic microwave background should look the same all over the sky. But the WMAP found, and Planck has now confirmed, an asymmetry between opposite hemispheres of the sky, as well as a ‘cold spot’ that covers a large area.

The asymmetry “defines a preferred direction in space, which is an extremely strange result”, says Efstathiou. This rules out some models of inflation, but does not undermine the idea itself, he adds. It does, however, raise tantalizing hints that there may yet be new physics to be discovered in Planck’s data.

So far, the team has analysed about 15.5 months of data, and “we have about as much again to look at”, says Efstathiou. The team expects to release the next tranche of data in early 2014.