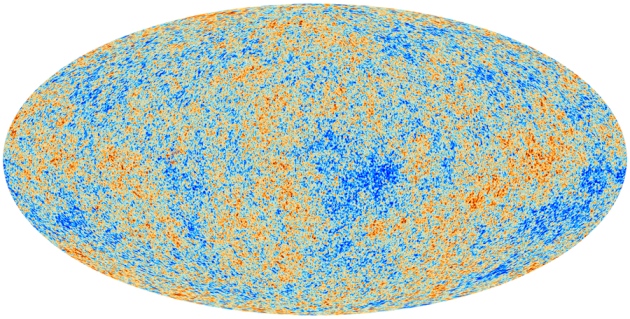 Planck has unveiled the sharpest picture of light from the 380,000-year-old Universe.

For astronomers, it is the ultimate treasure map. On 21 March, the Planck space telescope team released the highest-precision map yet of the cosmic microwave background (CMB), the faint but ubiquitous afterglow of the Big Bang. Crowning nearly 50 years of CMB study, the map records the precise contours of the nascent Universe — and in doing so pins down key parameters of the Universe today.

The tiny fluctuations embedded in the CMB map reveal a Universe that is expanding slightly more slowly than had been thought. That dials back the amount of gravity-countering ‘dark energy’ to 68.3% of the Universe, and adds a little more unseen dark matter to the mix. It also means that the Universe is a little older: 13.82 billion years old, adding a few tens of millions of years to the previously calculated value. The map even shows that the number of neutrino ‘flavours’ permeating the cosmos will probably remain at three — had there been a fourth, the Universe would have expanded more quickly during its first moments.

These results represent refinements of numbers obtained by previous missions such as the Wilkinson Microwave Anisotropy Probe (WMAP). Where the Planck spacecraft, watching the sky from a vantage point 1.5 million kilometres away, breaks the most new ground is in its support for the reigning theory that describes the instant after the Big Bang. The theory, known as inflation, holds that during an unimaginably rapid expansion lasting just 10−32 seconds or so, the Universe grew from a subatomic point to something the size of a grapefruit that then continued to expand at a more stately pace. This growth spurt would help to explain why the Universe we see today is homogeneous on the largest scales, yet riddled with clumps, filaments and sheets of galaxies.

“Planck could have found that there was something majorly wrong with inflation,” says astrophysicist Jo Dunkley at the University of Oxford, UK, who has worked on data from Planck and the WMAP. “Instead, we’ve got new evidence that this expansion did happen.”

In the minutes that followed the burst of inflation, particles such as protons and electrons formed from the cauldron of proto-matter, and photons began to bounce around like pinballs. It was only 380,000 years later, when the charged plasma cooled into neutral atoms, that those photons could fly freely. Today they make up the CMB, and carry with them an imprint of the quantum fluctuations that roiled the inflationary Universe.

Seen in the map as tiny variations around an average temperature of 2.7 kelvins, the fluctuations caused alterations in the density of matter, which ultimately snowballed into the galaxies seen today. “All the structures we see in the Universe are coming from these little perturbations,” says Paul Shellard, a Planck cosmologist at the University of Cambridge, UK.

Inflation, proposed in 1980 by Alan Guth, a physicist now at the Massachusetts Institute of Technology in Cambridge, predicts that the range of temperature variations should follow a bell curve — a smooth Gaussian distribution. Cosmologists had found hints in previous missions that the distribution was not so smooth, suggesting that some other process was involved in inflating the Universe (see Nature http://doi.org/bgjd86; 2008). But so far, Planck’s temperature data look almost perfectly Gaussian, and standard theories for inflation are looking ever more secure.

“A lot of baroque inflationary models are gone,” says Paul Steinhardt, a theoretical physicist at Princeton University in New Jersey, who has tried to poke holes in inflation by proposing theories such as ekpyrosis, which invokes a cyclical Universe that dies and is reborn in a series of Big Bounces.

But the cosmological case is not quite closed. There are a few details in Planck’s map that seem out of place: an odd ‘cold patch’, for example, and a greater proportion of hotspots on one side of the sky. Moreover, Planck’s value for the Hubble constant, which describes the rate of expansion of the Universe, is surprisingly low compared with estimates made with other astronomical techniques — perhaps a hint of new physics in play.

Full confirmation of inflation — and clues about what drove it — will depend on the detailed properties of the CMB’s photons. The wrenching moment of inflation should have shaken the very fabric of space-time, resulting in gravitational waves. They in turn may have left a pattern in the polarization of the photons. The Planck team expects to release its polarization data early next year. “If we found gravitational waves, we’d get a Nobel prize — it’s a big deal,” says George Efstathiou, director of the Kavli Institute for Cosmology in Cambridge, UK, and one of Planck’s lead researchers.

The exceedingly faint polarization signal may lie beyond the reach of Planck’s detectors. Ground-based microwave telescopes, such as the Keck Array in Antarctica, are also in on the hunt, although they are limited to looking at one hemisphere of the sky, and in certain microwave frequencies, because oxygen in Earth’s atmosphere can block some of the CMB photons. Charles Lawrence of NASA’s Jet Propulsion Laboratory in Pasadena, California, the lead Planck scientist in the United States, says that it may take another space telescope to finish the job, or perhaps even a mission, decades away, to detect the gravitational waves directly.

But in terms of temperature variations, Lawrence says, astronomers will have to be content with Planck, which “squeezes pretty much all the juice out of the CMB”. He finds that juice very sweet, even if it leaves a few questions beyond reach. “We have a pretty good idea of what the Universe is, but we don’t have the faintest idea why it is,” says Lawrence, adding with impish glee: “It’s rather fun, isn’t it?”