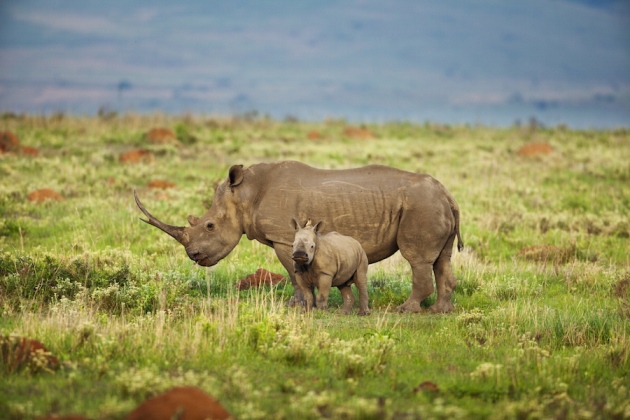 A white rhinoceros with its calf in Kwazulu Natal, South Africa.

An ambitious project to relocate rhinos from South Africa to Australia has been accused by some conservation researchers of being a waste of money.

The Australian Rhino Project charity, headquartered in Sydney, has attracted huge publicity for its plans to move 80 rhinos to Australia “to establish an insurance population and ensure the survival of the species”. It raised more than Aus$800,000 (US$600,000) in the year to September 2015, and hopes to start by flying out six rhinos later in 2016. The charity says that eventually, rhinos from the Australian herd could be sent back to Africa to re-establish wild populations there, when poaching — which is devastating rhino populations in Africa — becomes less of a threat.

But in a letter published in Nature this week1, four researchers warn that the project “is diverting funds and public interest away from the actions necessary to conserve the animals”. The million-dollar cost of moving 80 animals would be better put towards poaching prevention, the researchers say.

“Anyone associated with conservation in Africa is well aware of the massive poaching crisis going on,” says Matt Hayward, a conservation researcher at Bangor University, UK, and lead author of the letter. But he says that moving rhinos to Australia is a bad solution. “I don’t think it can do any harm, but the pot of money is limited. We’re better off focusing in situ.”

But the rhino project’s founder, Ray Dearlove, strongly defends the initiative. A “staggering amount of money” has been put towards anti-poaching initiatives and animals are still being poached, he says, adding that moving rhinos to Australia is “one possible strategy in the complex web of saving the rhino”. (He also criticizes the letter for stating that the rhino-relocation effort will cost US$3.5 million, when the costs are not yet precisely known, and for, before a correction, misstating that 16 rhinos — not 6 — were to be transported in 2016.)

Dearlove adds that he takes exception to the letter-writers’ suggestion that the project “has echoes of colonial times, when African resources were exploited". “In terms of exploitation, it is completely opposite to that,” he says. “This is an attempt to try and save the species.”

Hayward says that he is not opposed to moving animals for conservation purposes. He himself works on projects to reintroduce European bison (Bison bonasus) to Poland and red squirrels (Sciurus vulgaris) to parts of Wales. And conservationists are increasingly looking to move animals around to establish new or more secure populations, as climate change and activities such as logging or poaching disrupt their habitats.

But Hayward argues that rhinos should not be removed from Africa. A rhino’s value lies not just in the animal itself, but also in its connection to the landscape and environment of its native ecosystem, he says. Hayward and others also criticize the project for moving white rhinos (Ceratotherium simum), which have a global population of 20,170, rather than the much more endangered black rhinos (Diceros bicornis), of which fewer than 4,880 are left.

Mark Stanley Price, a reintroduction specialist at the University of Oxford’s Wildlife Conservation Research Unit, UK, notes that although black rhinos are more threatened, it is not clear whether these animals could be kept wild in Australia. They are browsing feeders — eating leaves, branches and fruit — which makes them less likely to adapt to the local vegetation than the more generalist, grazing white rhinos. “It would be much more difficult to manage black rhinos under those situations. And it is the blacks that need the help,” he says.

Stanley Price adds, “This is an interesting initiative. It’s going to have some particular difficulties. Is it really the right answer?”

But the debate may prove academic: Dearlove says that although not all the permissions required for the relocation effort are yet in place, he still intends to transport the first rhinos this year.