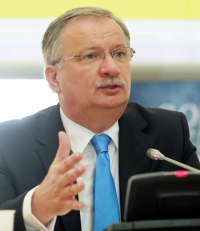 Research minister Ioan Mang says that plagiarism allegations against him are politically motivated.

Romania’s new government was thrown into turmoil last week after its education and research minister, Ioan Mang, was accused of extensive plagiarism in at least eight of his academic papers.

The allegations first began circulating on 7 May, just hours after Prime Minister Victor Ponta, a Social Democrat, announced the appointment of Mang and other ministers of the new government. Last week, former prime minister Emil Boc, of the Democratic Liberals, called for Mang’s resignation, dramatically waving the allegedly plagiarized articles and the original papers in front of television cameras.

The scandal has dismayed many Romanian scientists, who are already nervous that the incoming centre-left coalition government might reverse some of the energizing reforms that were introduced by the previous centre-right coalition to improve the country’s sluggish research system.

The radical education and research laws approved last year were designed to introduce competition for positions and research funds, and to eliminate endemic nepotism and other corrupt practices in Romanian academia (see Nature 469, 142–143; 2011). That government also passed a new anti-plagiarism law, which created a Research Ethics Council comprising high-ranking scientists selected by the research minister, and stated that any academic found guilty of such misconduct would automatically lose their job.

Mang is a computer scientist at the University of Oradea in northwestern Romania, and has served on the senate’s education committee, which tried to hinder the previous government’s research reforms. One of Mang’s papers now under scrutiny (I. Mang Seria Technichni nauki 12, 129–135; 2004) is allegedly a near-identical copy of a manuscript intended for presentation at a scientific workshop and authored by cryptographer Eli Biham, the dean of computer science at the Technion Israel Institute of Technology in Haifa.

Biham notes that he had withdrawn the manuscript from the workshop because of conceptual errors in the work, but had been unable to completely remove the document from the Internet. Mang seems “neither to have read nor tried to understand the claims” in the paper, Biham wrote last week on his website.

Mang did not respond to Nature’s requests for comment on the allegations, but has told Romanian newspapers that the claims are politically inspired. He has pledged to resign if experts can prove the allegations to be true.

A Romanian blogger, economist Razvan Orasanu at Harvard University’s John F. Kennedy School of Government in Cambridge, Massachusetts, contacted authors of some of the allegedly plagiarised papers directly. In addition to Biham, Takeshi Shimoyama at Fujitsu Laboratories in Kawasaki, Japan, and Chu-Hsing Lin at Tunghai University in Taichung City, Taiwan confirmed extensive similarities with their publications.

The Research Ethics Council has taken up the case and is obliged to respond within 90 days. Claiming concern that the independence of the council might be called into question, because its members were chosen by the former education minister, Ponta has also referred the case to the Romanian Academy, even though that body has no mandate to investigate allegations of scientific misconduct.

Former research minister Daniel Funeriu, who designed last year’s reforms, says that he is “appalled by the dimension of the fraud”, which he says damages the international credibility of Romania at a time when the nation needs to strengthen its research system. In the past 12 months, the previous government issued several calls for competitive research funds worth 1.2 billion lei (US$350 million), under a rigorous system that enlists foreign academics to review project proposals. However, austerity measures have slashed scientists’ salaries by up to 25%, and thousands of jobs have been cut in the education and research sectors.

The programme of the new government suggests that it might weaken the research-performance criteria required for academic promotion, for ranking the country’s universities and for selecting members of the research ministry’s expert committees. “First we must see if they actually do this,” cautions Bogdan Dumitrescu, a computer scientist working at the Tampere University of Technology in Finland, and a member of the Romanian national council for attesting titles, diplomas and certificates, which advises on academic promotion. “But this seems to be the way the wind is blowing, and it would be a great pity.”

As the investigation into Mang’s publications gathers pace, Funeriu argues that “the actual fight is between ethically sound scientists and the demons of the past”, referring to the communist era under the dictatorship of Nicolae Ceauşescu. “The world should know that Romanian researchers are not like their current science minister.”

Mang resigned as education and research minister on 15 May.