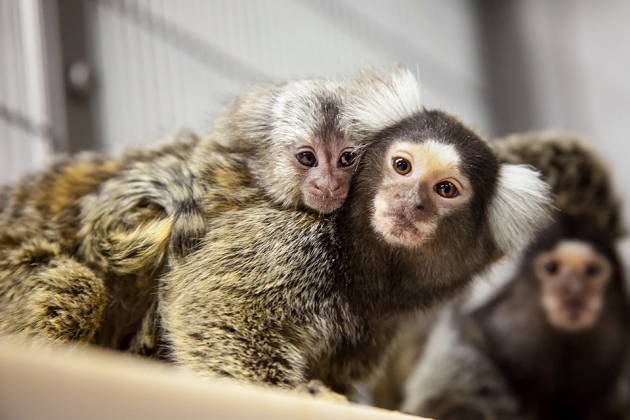 Work with marmosets could one day yield better hearing devices for deaf people.

The din of what sounds like a high-pitched cocktail party fills the lab of neuroscientist Xiaoqin Wang at Johns Hopkins University in Baltimore. But the primates making the racket are dozens of marmosets, squirrel-sized monkeys with patterned coats and white puffs of fur on either side of their heads. The animals chatter to each other, stopping to tilt their heads and consider their visitors with inquisitive expressions.

Common marmosets (Callithrix jacchus) are social and communicative in captivity, unlike the macaque that is more commonly used as a model primate. And in January, Wang and his colleagues revealed that marmosets are also the only non-human animal that can hear different pitches, such as those found in music and tonal languages like Chinese, in the same way people can1. This makes the marmoset the closest proxy researchers have to the human brain when it comes to hearing and speech, says Quianjie Fu, an auditory researcher at the University of California, Los Angeles, who was not involved with the paper.

Until recently, researchers have relied on songbirds for such work, but the birds’ brains are so different from human ones that the insights they provide are limited. Wang hopes that marmosets will improve researchers’ understanding of the evolution of communication and help them refine devices such as cochlear implants for deaf people.

In a 7 December paper2 in the Journal of Neuroscience, Wang and his colleagues described the results from an electrical stimulation study in marmosets that were free to interact with each other as they normally would. The team showed for the first time that electrical stimulation — such as that provided by a cochlear implant — does not activate the auditory portions of the brain in the same way that sound does.

This new map gives researchers a starting point to answer questions about why cochlear implants cannot distinguish pitch well – a longstanding problem with the devices. And one of the world’s largest manufacturers of cochlear implants, Advanced Bionics in Valencia, California, is now beginning to test its next-generation devices in the marmosets. The primates will be invaluable for these kinds of improvements, says Abhijit Kulkarni, director of research and development at the company, which was not involved in the current study.

Cutting through the noise

Cochlear implants are generally considered a medical success story, despite their problems with pitch, including a failure to pick up high-pitched sounds or to pick out a voice from background noise.

But improving them is tough. Researchers only have feedback from people to tell whether an experimental device is working. Linking that feedback with what’s going on in the brain would show exactly which pattern of circuits leads to distinguishing features of sound such as tone and pitch, says Fu. But observing the activity of individual neurons in humans isn’t possible.

In their latest paper, Wang and his colleagues described how they looked at the activity of neurons in the auditory cortex — the brain’s hearing centre — of four adult marmosets that were deaf in one ear, as they were exposed to electrical and acoustic stimulation. Electrodes implanted in this region recorded how more than 1,400 individual neurons reacted to sounds played in the normal ear, and how they responded to electrical stimulation similar to currents produced by cochlear implants in the deaf ear.

The researchers found that the electrical stimulation failed to activate many of the neurons that respond to sound, including some involved in pitch perception. The most likely explanation, they say, is that the electrical current spreads across the brain, turning on neurons that are supposed to stay inactive during the processing of sounds. This disrupts the pattern of activation and deactivation in the brain’s circuits that enables normal hearing.

“The really fascinating question from this paper is the failure of cochlear implants to successfully provide information to the brain,” says James Phillips, a neurophysiologist at the University of Washington in Seattle, who was not involved in the study. “I do think [the study] is incredibly valuable, not only as providing insight into the way this works, but some explanation for why.”

These findings could lead to better cochlear implants if those devices were designed to selectively stimulate the neurons that did not respond to the electrical pulses, says Julie Bierer, a neuroscientist at the University of Washington in Seattle, who wasn’t involved in the paper.

But she says that some of the discrepancies between the auditory and electrical stimulation could be due to the fact that the devices were not switched on constantly, as they would be in a person with a cochlear implant. This could prevent the auditory system from adapting to the new signal by rewiring itself over time.

Wang says that his group is planning to do this next, and to test whether the pattern is different in baby monkeys, whose brains are more malleable. They have also built a soundproof room in which multiple marmosets with the electrical stimulation devices can run around and interact with one another. This will allow the researchers to connect the wirelessly transmitted brain recordings with recordings of the sounds the animals make, allowing them to determine how the brain processes communication during behaviours like fighting or eating.