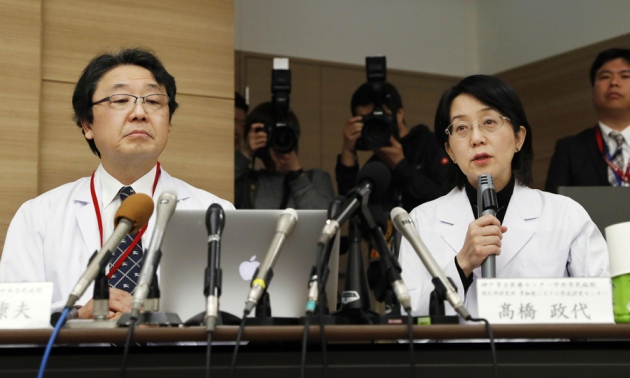 Masayo Takahashi and Yasuo Kurimoto have done it again. Two and a half years ago, these two Japanese physicians took retinal cells derived from induced pluripotent stem (iPS) cells and successfully transplanted them into a woman who had age-related macular degeneration. It was the world’s first surgical procedure using iPS cells, which can develop into any type of cell in the body, but are not as ethically fraught as stem cells from human embryos.

On 28 March, the same team carried out a procedure that sounds similar, but with an important twist. This time, the retinal repair cells were made using iPS cells from an anonymous donor.

There are many things to say about this achievement. The first is congratulations. Takahashi, an ophthalmologist at the RIKEN Center for Developmental Biology in Kobe, and Kurimoto, a surgeon at the Kobe City Medical Center General Hospital, have moved iPS-cell technology towards the clinic in the way it should be done — slowly and cautiously — and have thereby set a great precedent. They had non-human primate data, they rigorously tested cells before using them, and when they found a genetic abnormality in the first study — even though it was one that they didn’t think would cause cancer — they called off the procedure and were open about the abnormality.

The cautious approach, one hopes, will prevent such trials from going off the rails (as happened, for example, with gene therapy) and so avoid blocking other iPS-cell procedures that are in the works. Researchers at Kyoto University in Japan are investigating iPS-cell-derived blood for transfusions and neurons for treating Parkinson’s disease.

The second thing to say is that this is good news for all. The use of iPS cells is one more step away from the vicious debate over the use of embryonic stem (ES) cells, which has hampered stem-cell science for more than a decade, especially in the United States. Yet, of course, the debate will not go away — as argued by many scientists and in these pages, ES cells will still have their place in research, and scientists wanting to pursue such work will run into the same political roadblocks. But a path forward using tissue derived from iPS cells will put to bed sensationalized talk of farms in which embryos are created for harvesting organs.

The third thing is that this work signals a fairer distribution of medical benefits. Some had feared that iPS cells might end up as a boutique treatment for the rich. If a medical procedure required new cells to be obtained from each patient, and every procedure needed to pass through the costly and tedious process of extracting cells, reprogramming them and rigorously testing them to ensure safety, the cells would be so costly that only the very wealthy could afford them.

But if one can use cells that are in a bank (as these were), selected in such a way as to be a good immunological match for large swathes of the population and paid for by the government, costs can be slashed and more people can benefit. And banked cells will be immediately available — a great boon for situations such as spinal-cord damage, in which scientists think that starting repair work with stem cells needs to be done soon after the damage to have the greatest chance of success.

The fourth thing to say is that Japan should not get carried away. So far, Takahashi has moved slowly. But Japan has a fast track in place to open the door to clinical commercialization without sufficient testing for efficacy. Determining whether a treatment is ready for mass commercial use should be based on a careful weighing up of risks and benefits. No matter how carefully risks are assessed, they are an inherent part of such a procedure, and include surgical mishaps, unknown and unpredictable chances of mutation and the danger of missing more-effective alternatives.

To know that the procedure is worth it, one must analyse the benefits and not just show it is safe. In Japan’s fast-track process, weighing up the benefit — the efficacy of the procedure — will be left to studies done after the treatment has been commercialized. But there are reasons — such as the lack of standardized protocols between hospitals, the lack of a control group (and the lack of anything to be gained by carrying out such rigorous reporting) — that raises questions of whether efficacy would ever be assessed.

Under the fast-track system, demonstration of safety in a half-dozen patients could be enough to get a treatment on the market. Takahashi and Kurimoto’s current trial is only a safety ‘clinical study’. It does not count towards the ‘clinical trial’ fast track. But that is the long-term goal. The project leaders of the current study, and those who will be following in their path, must move with the same care and caution when iPS-cell procedures start entering the clinical-trial stage.