A new lithium-ion battery is one of the smallest ever made and the first battery to be created with a three-dimensional printer. Measuring less than a millimetre on each side, it fits comfortably on the head of pin and could potentially power tiny medical devices or miniature robots.

3D printers make objects from the ground up by depositing successive layers of material on top of each other. Most 3D printers manipulate plastic, which is useful for prototyping or for crafting toys and knick-knacks. Making a working battery required a custom machine that laid down new materials loaded with lithium-metal-oxide particles.

"We're trying to take 3D printing to the next level by printing functional materials," says Jennifer Lewis, a materials scientist at Harvard University in Cambridge, Massachusetts, whose team presented the microbattery on 17 June in Advanced Materials1. 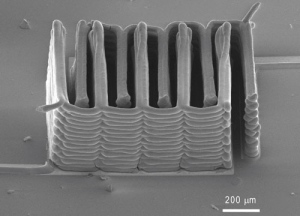 The printed electrodes of the lithium-ion microbattery are interlocked together, as shown in this image from a scanning electron microscope.

While squeezing out the nanoparticles like toothpaste, the printer's nozzle 'drew' a pair of five-fingered electrodes that were interlocked together like hands clasped in prayer. The paste hardened and the process was repeated, again and again, to add more layers and thicken the rechargeable battery.

The final product included up to 16 layers submerged in an electrolyte solution, and weighed less than 100 micrograms. Yet it was able to store almost as much energy, gram for gram, as larger lithium-ion batteries that run laptops and electric cars. And the power it dished out, 2.7 milliwatts per square centimetre, rivals the capabilities of other cutting-edge microbatteries developed since 2010 at the Massachusetts Institute of Technology2 and the University of Illinois at Urbana-Champaign3.

Printable batteries also promise to be especially adaptable. With a few tweaks, Lewis could super-size her battery. Or she could tailor its shape to suit a particular application.

"The fact that she can print these in arbitrary sizes is extremely exciting," says Robert Wood, a roboticist at Harvard who wasn't involved in the study. "The customizability is really appealing."

Wood builds RoboBees, insect-sized robots that fly and consume an inconveniently large amount of power while doing so. Currently that power is supplied through a wire: no off-the-shelf batteries are light enough. But printed batteries packed together might provide just enough juice to get the tiny robots off the ground.

Batteries for RoboBees are just one step towards a much grander goal. Lewis has already figured out how to print 3D antennas4 and flexible wires5 made of silver. Ultimately, she hopes to be able to print entire electronic devices from scratch — creating not just the shell of a hearing aid, for instance, but its microphone, speaker, circuitry and power source in the ultimate do-it-yourself project.